What Is Eudaimonia? Why It Is Much Better Than Happiness 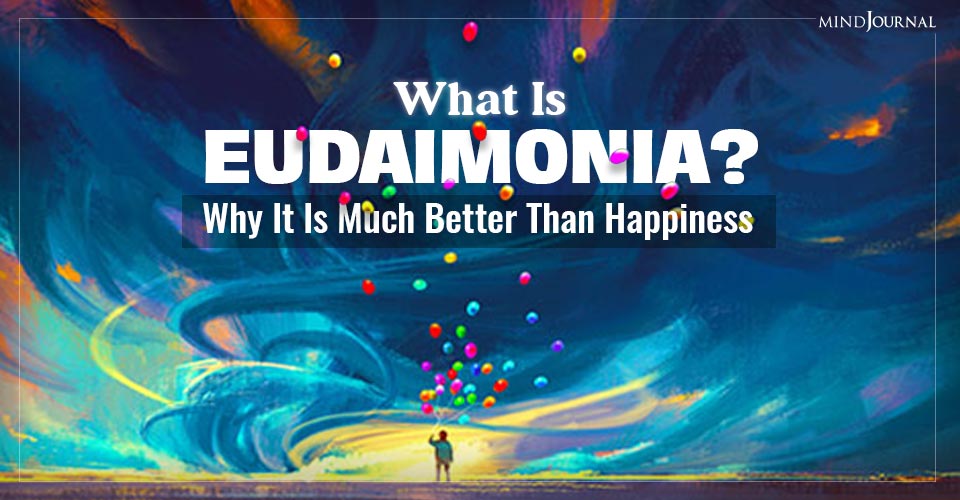 Have you ever come across the concept of eudaimonia? As interesting and intriguing it might sound, if you are able to live your life based on this idea, then it can truly change your life for good.

We all say we want to be happy, but the pursuit of happiness often seems like a wild goose chase. Maybe the problem is not so much with us, or the world we live in, but with the very concept of happiness.

A much more powerful concept, I think, is that of eudaimonia, which literally means ‘good soul’, ‘good spirit’, or ‘good god’.

Eudaimonia is often translated from Greek simply as ‘happiness’—but that can be very misleading. The word ‘happy’, which is related to ‘happen’ and ‘perhaps’, derives from the Norse happ for ‘chance’, ‘fortune’, or ‘luck’. From Irish to Greek, most European words for ‘happy’ originally meant something like ‘lucky’—one exception being Welsh, in which it originally meant ‘wise’.

Another word for ‘happy’ or ‘fortunate’ in Old English is gesælig, which, over the centuries, morphed into our ‘silly’.

Eudaimonia, in contrast, is anything but silly. It has nothing to do with luck and everything to do with hard work. It is a much deeper, fuller, and richer concept than happiness, sometimes articulated in terms of flourishing or living a life that is worthwhile or fulfilling.

Many philosophical schools in antiquity thought of eudaimonia as the highest good, often even the very aim and purpose of philosophy, although the various schools, such as the epicureans, the stoics, and the skeptics, may have conceived of it in somewhat different terms.

What can be said is that, unlike happiness, eudaimonia is not an emotion but a state of being—or even, especially for Aristotle, a state of doing. As such, it is more profound than happiness, more stable and durable, and reliable, and cannot easily be taken away from us. Although it leads to pleasure or satisfaction of the deepest kind, it does not arise from pleasure but is according to higher values and principles that transcend the here and now.

Related: 7 Snoopy Quotes That Redefine The Art Of Being Happy

Socrates, it seems, equated eudaimonia with wisdom and virtue. In the Greater Alcibiades, he says that he who is not wise cannot be happy; in the Gorgias, that nothing truly bad can ever happen to a good man; and in the Meno, that everything the soul endeavors or endures under the guidance of wisdom ends in happiness.

At his trial, in the Apology, Socrates gives a defiant defense, telling the jurors that they ought to be ashamed of their eagerness to possess as much wealth, reputation, and honor as possible, while not caring for or giving thought to wisdom or truth, or the best possible state of their soul. ‘Wealth’ he says, ‘does not bring about excellence, but excellence makes wealth and everything else good for men, both individually and collectively.’

Socrates provided the ultimate proof that nothing truly bad can ever happen to a good man: When the jurors condemned him to death, they only made him and his ideas immortal—and he did all he could not stop them.

Plato broadly agreed with his teacher Socrates. In the Republic, Plato’s brother Glaucon argues that most people are fundamentally selfish, but maintain a reputation for virtue and justice to evade the social costs of being or appearing unjust. But if a man could get hold of the fabled Ring of Gyges and make himself invisible, he would most surely behave as it suited him:

“No man would keep his hands off what was not his own when he could safely take what he liked out of the market, or go into houses and lie with any one at his pleasure, or kill or release from prison whom he would, and in all respects be like a god among men.”

We behave justly not because we value justice, but because we are weak and fearful; while the unjust man who is cunning enough to seem just will get the better of everyone and everything.

As part of his lengthy reply to Glaucon, Plato famously conjures up an idealized Republic to help him ‘locate’ (define) justice, first in the state and then in the individual. Plato argues that justice and injustice are to the soul as health and disease are to the body: If health in the body is intrinsically desirable, then so is justice in the soul. For Plato, an unjust man cannot be happy because he is not in rational and ordered control of himself.

It is, however, with Plato’s one-time student Aristotle, and his Nicomachean Ethics, that the concept of eudaimonia is most closely associated.

What, asks Aristotle, is this goal that is an end-in-itself? This ‘supreme good’, he replies, is eudaimonia, and eudaimonia only.

Whereas human beings need nourishment like plants and have sentience like animals, their distinctive function, says Aristotle, is their unique and god-like capacity to reason. Thus, our supreme good is to lead a life that enables us to use and develop our reason, and that is in accordance with rational principles.

By living our life to the full according to our essential nature as rational beings, we are bound to flourish, that is, to develop and express our full human potential, regardless of the ebb and flow of our good or bad fortune.

Related: Contentment over Happiness: Why It’s Better To Be Content Than Happy

To put this in modern terms, if we develop our thinking skills, if we guard against lies and self-deception, if we train and master our emotions, we will, over the years, make better and better choices, do more and more meaningful things, and derive ever-increasing satisfaction from all that we have become and all that we have achieved, and are yet able to achieve.

If you are able to incorporate eudaimonia and its magic into your life, you will see how your life changes for the better. Happiness is important in life, but sometimes contentment and fulfillment are more crucial. The more you are able to work on how you think, and can handle your emotions in the best way possible, the closer you will be to experiencing eudaimonia in your life.

21 Laws of Dokkodo: The Japanese Way of Walking Alone

Do you want to live like a badass who is not bothered by drama or negativity? Do you want to be unfuckwithable and live with inner peace? Then legendary samurai Miyamoto Musashi’s book Dokkodo can help you get in touch with your inner self and be a ruthless Ronin.

Miyamoto Musashi: The sword-saint of Japan

Miyamoto Musashi: The Kensei of Japan

Life can often feel overwhelming and confusing as we navigate through the challenges life throws at us. Religion and spirituality can often show the light and steer us towards the right direction when we feel lost and hopeless. Hindu teachings can help us better understand the meaning of life.

Hinduism, the oldest religion in the world, can teach us a lot about life, even if you are not a Hindu or even religious. Here are some hindu teachings about life -

Meaning of life in hinduism

Trimurti: The Hindu Triad
READ FULL ARTICLE ⇲
Up Next

Life is a silly little maze where we don’t know what to expect at the next turn. While we can prepare all we want, life always throws something at us that we never expected. If you have been tired of countering life’s plans, stress, anxiety, and depression have probably taken over you by now. But you need to trust the universe that you will be okay. No matter what, you WILL be okay!

We all love to make plans. We love to list down things that we need and want to do. And check off each item as we do more and achieve more. We

Language can be confusing at times, especially as common phrases and idioms tend to get distorted over time. Regardless, old sayings and proverbs are a crucial part of communication that can help us connect better with others. So let’s dig into some popular old sayings and their meanings.

The way we communicate and the language we use has evolved gradually. Can you imagine terms like “Vibin',” “Lit”, “Sus” or even “What the F!” being spoken by noblemen of yore?

Even though language has become significantly bastardized now, we still use famous idioms, phrases and sayings at times to express ours