6 Ways To Tell A Relationship Has What It Takes 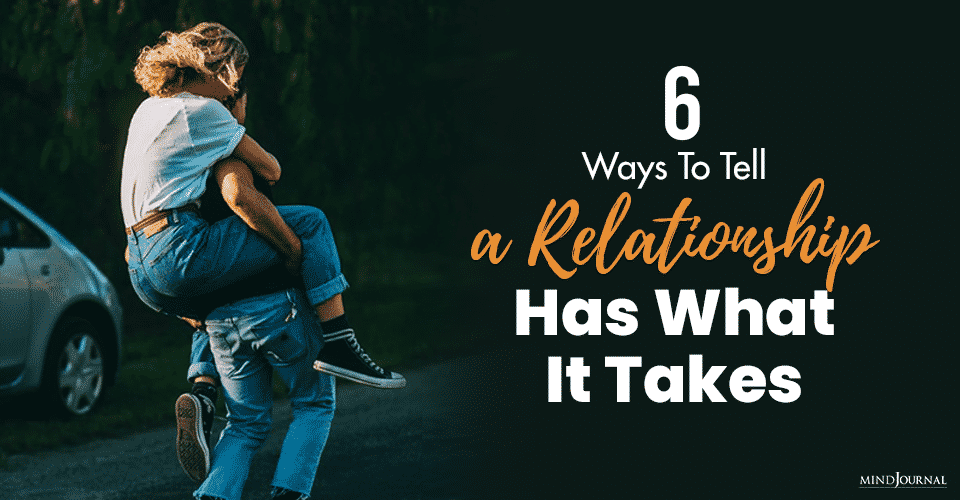 So many promising relationships don’t last. Despite the partners trying everything, they can’t seem to make it to the next step. Then how can you be sure that your relationship has what it takes?

When I talk to either partner when a relationship is in trouble, they tell me that it started out as what seemed like the perfect relationship. They felt certain that the other person was their soulmate—emotionally, sexually, mentally, and spiritually—and that nothing could diminish what they felt about each other.

When such couples come into therapy, they are understandably confused and demoralized. They have been unable to make sense of why their perfect union derailed, and desperately want to know what could have happened and if they still have a chance.

Too often people enter intimate relationships with an internal fantasy of what it will look and feel like.

These fantasies exist within each person before he or she begins the relationship. When a partner doesn’t live up to the fantasy, they either ignore the evidence or see them as incompatibilities to work on later on.

When two people falling in love do not share those fantasies upfront with each other, they are bound to be disappointed when the other doesn’t fall in line. They don’t realize that authentic love is never pre-written before a new relationship begins. They fully understand and believe that lasting love is born of actual experiences two people have only with each other from the moment they meet, and continues to deepen as time passes.

The dilemma is that fantasy love and authentic love feel very similar at the beginning of a new relationship. Both are filled with passion, devotion, and unconditional support. Yet they are distinguishable early on if partners know what to look for.

New lovers can use these six criteria to help them differentiate fantasy love from authentic love at the onset of a relationship.

Whether we recognize it or not, we unconsciously model our expectations of relationships from those we observe growing up. Unless we were exposed to multiple variations of how people give and receive love, we are highly likely to believe that what we have seen in our own corner of life is the way everybody is supposed to be.

Many people repeatedly fall in love with those who are combinations of relationships they have seen and internalized from the past. Feelings of familiarity can often trap us into relationships that are simply re-creations of what we’ve been shown. It’s as if we’ve been part of a script we didn’t write, but have learned by heart and are able to automatically recall any role by rote memory.

Read This Is What A Healthy Relationship Looks Like

Until we can rewrite our own relationship script, we are pretty much doomed to repeat those patterns. In addition, we are likely to project those roles onto others, expecting them to have memorized the lines they were “supposed to know.”

The blush of new love can make both partners strive to do just that, taking their cues from the responses of the other. All seems familiar and secure until underlying realities emerge.

Authentic lovers are different from fantasy lovers in the way they help each other rapidly recognize these internalized, childhood patterns and then explore them together.

If many other parts of the relationship are good, they can have the confidence to successfully integrate what works and leave the rest behind.

Most people, consciously or unconsciously, become very attached to what they believe is the only right way for themselves and others to think and behave. In the throes of the passion and devotion of early love, they may temporarily let go of those rigid beliefs but are eventually bound to resubmit to them.

When that happens, those initially adaptable lovers become less tolerant of whatever doesn’t fit their internal schema, and they can’t help but try to make the other partner who they want him or her to be. Too soon, criticism and control begin to replace acceptance and tolerance.

Couples who understand and practice authentic love can weather these emerging differences and teach each other new ways of thinking.

As they increase each other’s worldviews, they are able to move from overlapping fantasy expectations to new possibilities for both.

If new lovers have both learned from each past relationship, they are less likely to repeat unsuccessful patterns.

Beginning each new relationship based on the same old fantasy expectations dooms people to repeat previous patterns of failure.

Childhood scripts that repeatedly create similar adult relationships will end in predictable outcomes. For instance, if a newly-in-love person had one parent who dominated the relationship and one who regularly submitted, he or she may alternate between those two roles in each new relationship, as if they were the only ones to exist.

As these repeated relationship failures play out, it becomes apparent that preexisting, internalized fantasies have been a major factor in why they do not succeed.

Authentic lovers can see these unworkable patterns early on in the relationship and help one another open up to new ways of being together that neither may have experienced before.

Both fantasy lovers and authentic lovers sincerely promise their good intentions at the beginning of the relationship.

Those with preconceived fantasies have more difficulty keeping their agreements as the relationship plays out. They made promises based on certain expectations of behaviours. When things turn out differently than expected, they feel trapped by agreements they no longer want.

The other partner hasn’t “memorized the expected script,” and innocently behaves differently. Now the once-sincere partners are likely to feel duped and disappointed. Believing that their trust has been broken, they justify withdrawing from their commitment, and often blame the other for the failure.

These honest intimate partners express their love with courage and authenticity and expect to adjust and redefine their initial promises as they get to know each other better. They are open to altering both behaviours and responses as conditions change and continue to want the best for each other, whatever the outcome.

Authentic love is made stronger by the challenge.

The lovers talk over their desires and disappointments from the beginning of the relationship and look for innovative ways to stay connected with genuine and innovative options.

Read 50 Things We All Deserve In A Relationship

Fantasy love survives well when it is exposed to established social circles that support its expectations. If friends who hang out together watch the same TV programs, search out the same information sites on the media, and reinforce one another’s expectations, they may inadvertently continue to encourage unrealistic beliefs.

Authentic love can uproot those expectations and may threaten existing social circles.

When lovers are willing to explore new possibilities because of their relationship’s unique potential, they become more open to unfamiliar experiences that an existing social circle may find uncomfortable.

They see each other as though the other were a new culture to explore, welcoming each other’s differences. They are open to having their separate, preexisting worldviews challenged, and to break through any limitations of outdated thoughts or principles.

People who love each other authentically will continue to learn from their past mistakes.

In the process of relationship transformation, they can end up threatening the comfort of their current social circles. Friends and family who helped spawn and maintain the original existing order can then put pressure on a new relationship when it doesn’t fit the old mold.

Authentic lovers who may experience criticism from their friends or families can either try to change the mores of their current social circles or realize they might need a new and different support group.

Those challenges only serve to make them more determined to live in the present and to leave old relationships behind.

Authentic love creates opportunities for adventures that have not existed before.

Its partners are totally committed to love in a courageous and genuine way. They have entered that new relationship with the full commitment to explore and learn, and are open to whatever comes.

Transparency is the willingness and commitment to be deeply known and to want to know the other in the same way.

Transparency and true intimacy are inextricably intertwined and nourish each other’s existence. Authentic love depends upon each partner’s courage to be fully open and honest with another, whatever the outcome. They would rather know the depths of exactly who each other is at his or her core than pretend anything other than that reality.

Authentic lovers delve deeply into each other’s expectations, desires, and fears early on in the relationship. They try early on to separate out what is possible from what is not, and to decide together how to invest in what works for both of them.

Fantasy love is based upon untested, often inaccurate expectations that a new partner will feel and act as the fantasy dictates. Because of childhood programming, many people do not realize that its automatic practice defies the possibility of success.

People continue to enter new relationships with these internalized fantasies, searching for the security and comfort of familiarity. They are counting on a “just” world: If they do what is expected of them, the other will certainly behave as expected. When their relationships end in failure, they naturally assume that they didn’t pick the right partners.

People who instead seek authentic love know that successful relationships can never be based upon fantasy expectations.

What is possible changes with each new relationship, as the partners within it create what can only happen uniquely between them in those special moments in time.

Though they know that the honesty and courage inherent in genuine communication requires them to take on a continuous challenge, they would not have it any other way.