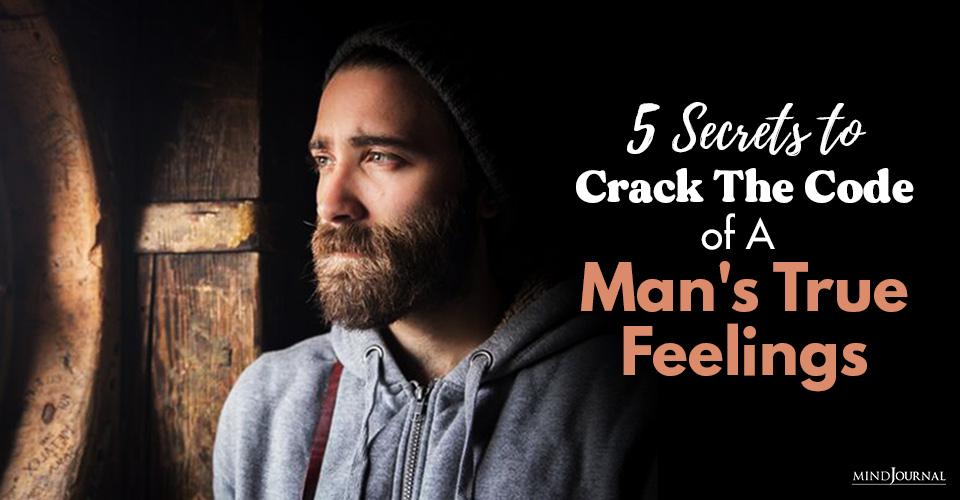 You might think that men are unfeeling beings with a stone in their chest instead of a heart, but the truth is anything but that. Rather, there are a few secrets that will help you understand and crack the code of a man’s true feelings.

“Our society constantly promotes role models for masculinity, from superheroes to politicians, where the concept of being a ‘man’ is based in their ability to be tough, dominant – and even violent when required.” -Deeyah Khan

Over the years societal norms regarding the traits of masculinity and femininity have been framed separately.

Since childhood men and women are trained to behave according to the preconceived notion that is in league with prescribed gender roles. They are highly criticized when their behavior manifestation deviates from the norm.

The myth that men are unfeeling creates damaging relationship problems.

Daphne Rose Kingma, author of The Men We Never Knew, has said:

“We’ve dismissed men as the feeling less gender—we’ve given up on them. Because of the way boys are socialized, their ability to deal with emotions has been systematically undermined. Men are taught, point-by-point, not to feel, not to cry, and not to find words to express themselves.”

Just because men aren’t adept at expressing their feelings, don’t for a minute think they don’t feel, and feel deeply.

Many times, men express their feelings using a secret code—a code that even they can’t decipher.

1. Men may convert one feeling into another.

Men may convert stereotypically feminine feelings, such as sadness or vulnerability, into feelings like anger or pride—feelings more socially acceptable for them to experience.

I remember a couple that came to see me in distress because they had recently learned their teenage daughter had been assaulted by a boyfriend.

A major conflict arose because John was threatening to kill the boyfriend, upsetting his wife and daughter tremendously.

They worried he might actually seek revenge and end up in jail.

With some work, I was able to help John express his true feelings: He cried, stating that he felt responsible for what had happened—as though he should’ve been able to protect his daughter.

He felt terribly sad that his daughter was going through such pain, and he fell justifiably angry.

After he expressed the full range of his feelings, he no longer threatened to kill the young man and was better able to support his daughter in helpful ways.

Related: Why Men in Relationships Need to Feel Desired

2. Men may shift their feelings into another arena.

Men may express emotions only in places where they feel safe, and where the expression of feelings is considered acceptable.

Just look at how men act at sports events: It’s not uncommon to see them express great exuberance and affection, giving each other hugs and high-fives.

Football and hockey players, thought of as some of the most “macho” men around, appear quite comfortable expressing their feelings with each other during a game.

Where else would you see men slapping each other playfully on the butt?

Put these same men in another context, and you probably wouldn’t see the same level of openness and comfort.

3. Men may experience their feelings through physical complaints.

It’s not uncommon to see men experience their feelings through things such as headaches and backaches.

You may know of a man who gets headaches only on the weekends, or becomes sick during vacations.

Why does this happen?

Because as long as men are working, they can cut off their feelings.

Without the structure of work, however, their feelings and needs surface, and may be expressed through physical symptoms.

I'm a licensed psychologist in St. Louis with over twenty years of experience helping people with anxiety, depression, and general confidence and adjustment issues. There's nothing more satisfying than helping people learn to believe in themselves and to live their best life with greater ease and fulfillment.View Author posts