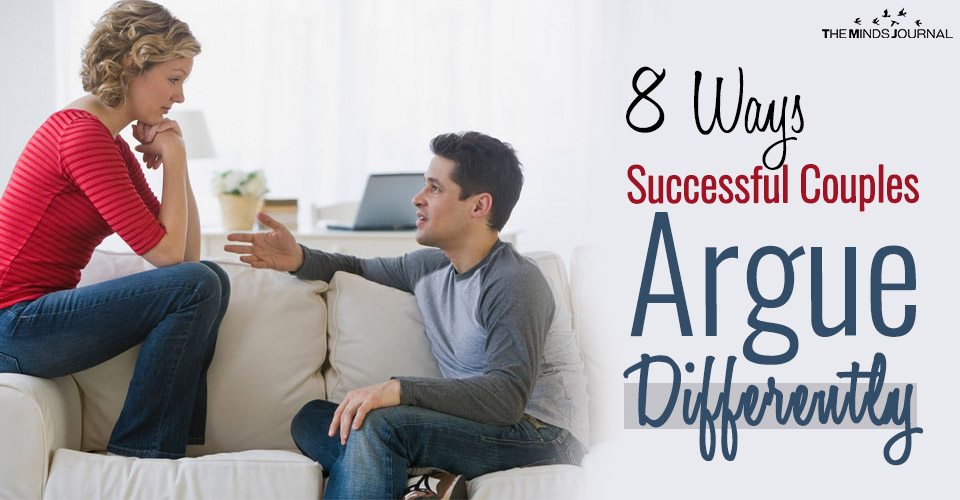 Arguments are part and parcel of a relationship and they ought to be. But the way couples argue says a great deal about whether they will last or not.

“Instead of attacking the other person’s character, happy couples color inside the lines and express their own feelings,” psychotherapist Vikki Stark, director of the Sedona Counselling Center of Montreal, tells The Huffington Post. “It’s fine to say, ‘I’m furious with you right now!’ It’s not fine to say, ‘You’re a sorry excuse for a human being.'”

How different are happy couples when they disagree? Here are eight ways in which happy couples do things differently according to Stark and other relationship experts.

1. They are not scared of fighting

Couples dedicated to a long term relationship don’t shy away from asking each other the difficult questions. They would rather discuss the thing than sweep it under the carpet. Instead of keeping the scary questions rolling in their mind they will ask it at the very first opportunity.

“When, if ever, are we going to have kids?” “What are we going to do if you get that job in another state? I don’t want to move there!” – so, the issue doesn’t get complicated at a later period, says Diane Sawaya Cloutier, an author, and a relationship expert.

“When taboo or uncomfortable topics remain unaddressed, they can turn any benign event into a big drama that could have been avoided in the first place,” she said. “Couples who talk about it can manage potential dramas.”

2. They don’t hasten up things and let each other talk

Arguments generally end the same way they began, says Bonnie Ray Kennan, a marriage and family therapist based in Southern California. Couples who have learned the art of dealing with things fairly during an argument take a slow approach and address the most difficult things in a soft and comforting tone. They tone it down when emotions run high and it looks like matters could take a turn towards the worse.

“Starting a difficult conversation softly and respectfully dramatically increases the chances of a good outcome,” she says. “Conversely, a ‘harsh start-up’ is very hard to process well, especially for men.”

Couples who argue sensibly allow each other the space to talk and express their concerns: “One person speaks and the other person truly listens,” Ray Kennan said.

Happy couples never get into ugly fights. There is no name-calling, sarcasm, and eye-rolling when happy couples argue even the most sensitive issue. They don’t lower themselves and each other to using school-yard tactics. Their fights are not bitter and their approach is one of problem-solving.

“Both partners understand that contemptuous behaviors are hard to take back and have a corrosive impact on a relationship,” Ray Kennan said. “Over time, they’ve become mindful of the effects of such dirty fighting and so they take it out of their repertoire.”

3. They don’t let matters get out of hand.

A bitter truth that causes hurt is bound to get things go off balance. But people who are serious about their relationship know when to get a grip over their anger or emotions. They try to strike harmony even in the midst of heated arguments. They do things like counting to 10 or taking deep breaths or just asking their spouse, “Hey, can we revisit this in the morning?”

“These couples know how to acknowledge and honor their emotions without getting overrun by them,” Amy Kipp, a couples and family therapist in San Antonio, told HuffPost. “They use self-soothing skills to make sure they’re at their best. When both partners are able to soothe themselves and take breaks, they’re usually able to reach a resolution (or agree to disagree!) with more ease.”

Read 7 Common Relationship Problems And Simple Ways To Fix Them

4. They have set rules for arguments.

Harsh words and low blows can be the part of arguments even between long-term couples. But they learn from their mistakes and make sure they don’t do or say things that they have to regret when things cool down. So, they speak to each other and promise they won’t say awful and regrettable things to each other. Once the emotionally charged fight ends, smart couples lay down some ground rules for arguing so it never gets out of hand again, says author and relationship expert Mario P. Cloutier.

The ground rules could be specific – “We will not interrupt each other when one is giving his or her perspective” – or more big picture: “It’s not about being right. It’s about getting to a common ground and resolving the problem,” suggests Cloutier.

5. They value each other’s feelings and points of view

They may get into frequent disagreements but couples in happy, long-time relationships put in their best effort to understand the other side of the argument, Kipp says.

“They may say, ‘I know you see it differently than me, but I appreciate that you are listening to my perspective,'” she says. “These positive moments decrease defensiveness and allow for a more productive conversation.”

Read How The Most Successful Couples Keep Their Passion Alive

6. They allow each other the benefit of the doubt

The worst thing to do is to draw conclusions based on half-truths. Successful couples don’t interrupt each other in the middle of a fight. They aren’t hasty in assuming their S.O. wants to jump ship and leave them just because they are expressing concern. They know to get rid of their insecurities and let their partners have the benefit of the doubt, Kipp says.

“Healthy relationships mean that people assume their partner is doing the best they can at the moment,” she explains. “In an argument, this means assuming both partners have the same goal: a mutually beneficial resolution. This allows arguments to be a team effort to achieve the goal rather than an adversarial ‘fight.'”

7. They can’t forget they are together just like a team.

Even in the midst of the worst scenarios, healthy couples don’t forget they are a team. They will be together, by each other’s side in every situation: in sickness and in health, for richer or for poorer… and as the argument dies out they decide to get back and be together as usual.

“Couples in satisfying, long-term relationships are able to remember that, no matter how angry they may be, life will continue after today,” says Stark. “Because of that, they don’t want to do lasting damage. Even in an emotional state, they are able to hang on to their long-term values. They’re a team, protecting their future together.”