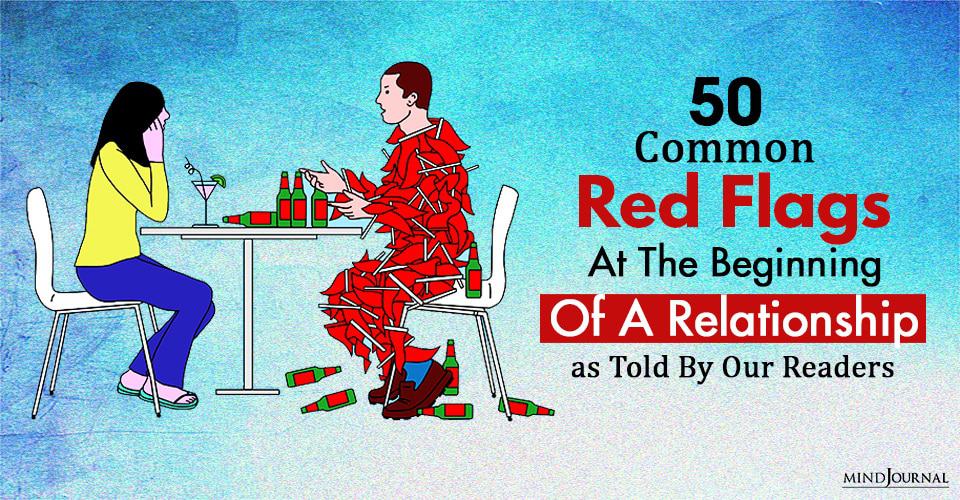 Relationships are hard work. We try our best to make our relationship as happy and healthy as possible. Despite all we do, the harsh truth is that some relationships are doomed from the very beginning, and the best we can do is protect ourselves from a potential heartbreak by looking for the the Red Flag at the start of a relationship. In the words of Madeleine Mason Roantree, a dating psychologist, a red flag is “something your partner does that indicates a lack of respect, integrity or interest towards the relationship.”

During the beginning stages of a new relationship, the “honeymoon phase”, it feels like we are living a real-life fairytale romance! Everything is exciting, heady and romantic, and often, we overlook the flaws and warning signs. More often than not, we idealize our partner and think that he/she can never do anything wrong. But sooner or later, reality hits us.

We asked our readers to tell us what they think is the most common Red Flag at the beginning of a relationship that people ignore, and the response was overwhelming!

Here are the top 50 ones we liked the best.

1. Lack of compatibility. People keep adjusting in the vain hope that things will work out eventually till it’s too late.
– Sulekha Pande

2. Anger for insignificant things, ignoring you while demanding all your time and attention, backhanded compliments…there’s a lot we ignore in hope that it will get better.
-Alexa Melton

5. Love bombing… never good! But usually too young to know what is hiding behind it. The Devil!
– Denisse Cafengiu

6. Don’t listen to a thing they say but watch everything they do. Actions do speak louder than words.
– Cheryl Brown Long

7. Not being heard, not really being seen, trying to mold themselves into something that really isn’t needed. It’s about trusting yourself and acting upon it instead of thinking it will change.
– Karen Yale

If you have no patience for a slow old person, a small child who has not yet learned to know they are in the way, or an animal or road traffic, chances are you not only have no patience, but you can not empathize with others.
– Deborah Hinton

11. Some huge red flags were not being able to follow through. Being second best, my feelings never mattered, them Blaming others & situations for their legal and personal shortcomings in life. Total complete disaster in the long run. The sad thing is I knew better but still thought I could change that person.
– Sarah Chapman

12. A common red flag is that they call you (so “nice” and “lovely”) many times a day asking where you are, with whom, where are you going and then, being bothered by whatever you answer no matter what. Later, they pretend that we apologize to them for doing nothing wrong.
Also, that everything is for them and by them first regardless of your wants or needs, being or acting different in front of other people (specially in front of their friends and/or yours), etc.
– M del Rosario

13. Too possessive! Wants all your time. You are thinking, hey he really wants to be with me, in reality he wants to control you. Be careful what you wish for.
– Dean Carter

Related: Is Your Relationship Toxic? Common Red Flags and What You Can Do

14. People mistake jealousy and possessiveness for caring and feel complimented by it at the beginning. “Oh they must really love me if they don’t want me to do that etc. So you stop doing it because it makes them upset but what you are really doing is allowing them control over you.
– Polly Smith

15. When they make light or even ignore your pain when something tragic happens….sociopath….run!
– Tammy Stewart Drake

16. Being aware if they lie to you right away, they will most likely continue to lie.
– Jennifer Sanguedolce Morrissey