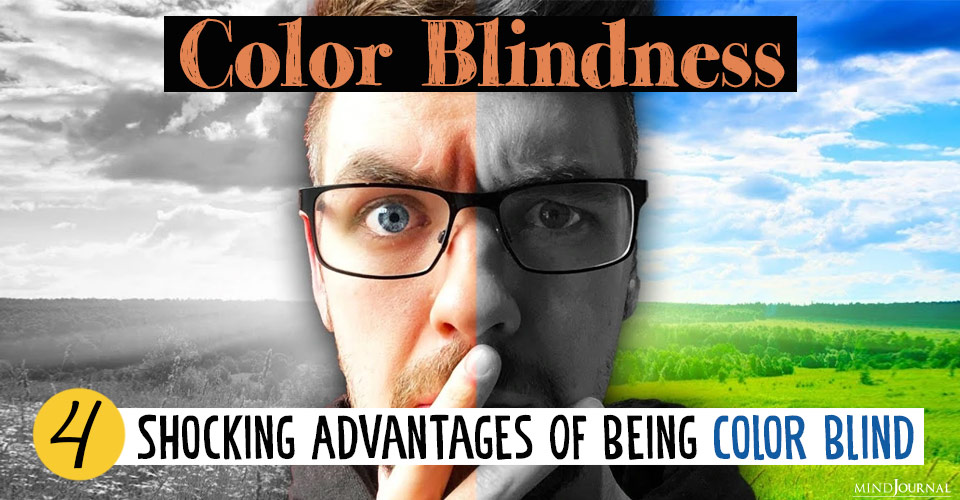 Color blindness is a blessing in disguise…

Color blindness doesn’t mean that you are blind. It is just a color vision deficiency that doesn’t let you distinguish between red and green or blue and yellow and some other color shades.

The retina of the human eye contains photoreceptors called rods and cones. Rods are sensitive to light, but cannot perceive color. Whereas, cones are responsible for our acute color vision. Absence or any defect in these cones results in color blindness.

So what a color-blind person sees may not be the same as everyone else. If you want to blame someone and be happy then just blame your ancestors. Color blindness is an inherited condition caused by a genetic mutation that mostly affects men than women.

If you are color blind there is nothing to feel bad about. Every human being on this earth is unique. No two of us are alike. Each and everyone is special.

Here are added advantages of color blindness that let you stand out from the rest.

1. Better at discerning shades of khaki

Do you know there are 15 shades of khaki? These shades are invisible to normal people because they look identical. But those with red and green colorblindness or deuteranomaly can easily spot differences between different shades of khaki according to the study published in the journal Current Biology.

Now, this condition seems to offer some evolutionary benefits because scientists hypothesize that such unique ability may have helped early humans spot potential food items such as foliage or grass in a complicated environment.

Researchers based at the University of Cambridge, UK, and the University of Newcastle upon Tyne, UK, first tested this ability of people having deuteranomaly. This genetic condition mostly affects men than women because it is caused by the mutation in the gene (found on the X chromosome and is recessive) responsible for making the ‘green’ pigment.

Unlike men, women have two X chromosomes so even if the recessive gene is mutated, the normal copy on another X chromosome can suppress the mutation. But, men with a single X chromosome can avoid the condition if a mutation occurs.

Related: 14 Things Your Eyes Say About Your Health

Can you detect patterns and textures in different colors? No, because you have fully functional color receptors. And camouflage is designed to deceive a normal eye.

But, colorblind people lack some of these receptors which gives them an added advantage. They are more effective in recognizing unusual patterns among natural colors.

Scientists at the University of Edinburg discovered the ability to see camouflage in people with red-green colorblindness.

Amanda Melin, the primatologist at the University of Calgary, found wild color-blind capuchins in Costa Rica. These capuchins were fast at detecting and hunting camouflaged insects than individuals with broader color vision. Upon DNA testing and comparing these capuchins with normal ones, it was noted that the colorblind ones could capture 20 surface-dwelling insects per hour while the normal ones could only catch 16.

What is the reason for such an amazing advantage of color-blind people?

Well, these people have lower color signals which make it easy for them to figure out differences in texture and brightness and see past color camouflage. Now just imagine you’re a part of a hunting group, you can easily spot prey than people with normal vision.

A majority of the people are of the notion that color blindness will make you ineligible for U.S. armed forces. Because you have to pass some color tests to qualify for specific positions like criminal investigations special agent or army intelligence jobs.