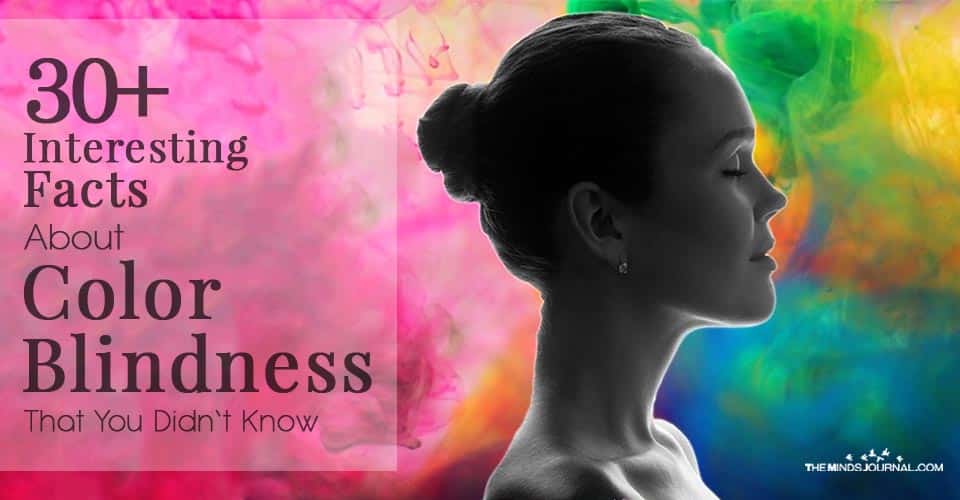 Do you know what it is to live like a color blind? About the complexities of color blindness?

Can you imagine how the world would be like if it were all blue? Imagine your life where you need a label to distinguish between tomato ketchup and chocolate syrup? What if ripe and unripe bananas look similar to you? Is it possible to achieve dreams if you were color blind?

“Color Vision Deficiency isn’t the end of the world. It’s just a different view of it.” – Karen Rae Levine

Here are facts that will help you know what it is like to live with color blindness:

1. 99% of all colorblind people are not really color blind. They just have color vision deficiency that doesn’t let them distinguish between red and green or blue and yellow and some other color shades. A complete absence of colors is very rare. The term color blindness is misleading.

3. Bees and butterflies have superior vision and can see colors humans can’t even see.

4. It is very rare for a color-blind person to just see black and gray.

Related: 25 Interesting Psychology Facts That Will Blow Your Mind

9. The most frustrating thing for color blindness is not the real limitation but the question – “what color is this (pointing at something)?”

11. Blue-yellow color blindness is a dominant, not sex-linked trait, which means both men and women are equally affected.

12. One in every 12 males in the US may be affected by color blindness while for females, there is only less than one in 200.

13. All newborn babies are color blind. Within 7 days of birth, they start to see colors and tend to develop a functional color vision by the time they turn 6 years old.

14. There are three main types of color vision deficiency: protan, deutan, and Tritan defects based on the different kinds of cones found in the retina that respond to blue, green, and red light.

16. Colorblind people can distinguish between 15 shades of khaki.  These shades are invisible to normal people because they look identical.

17. Till date, there is no known treatment or preventive measure for color blindness because it is an inherited disease.

18. Colored lenses or glasses can help improve color discrimination in your problem areas but cannot give you back normal color vision.

19. EnChroma – a type of sunglass that was invented in 2012 that actually improves color vision in people with red-green color deficiency.

20. Also, there are some iPhone and iPad apps available that help people with color blindness distinguish colors. The user can snap an image of any object and tap it anywhere on the image to see the color of that area.

21. A fatal railway accident in Sweden in 1875  was believed to be caused by a color-blind rail operator who failed to properly read a signal. This incident led to the development of color vision test for railroad workers.

Watch out this video to know about the complexities of color blindness:

22. Scientists at the University of Edinburg discovered the ability to see camouflage in people with red-green colorblindness.

23. Color blind people were trained as snipers in the military to spot a camouflaged enemy in grass and trees.

24. Not a lot of people, but some, suffering from a rare form of color blindness called unilateral dichromacy which means they have one normal seeing eye, and one color blind eye.

25. Some people suffer from complete color blindness, which is called achromatopsia or monochromacy.

26. Telling when meat is cooked or differentiating riped tomatoes and unripened green ones can be next to impossible for people with red-green color blindness as they cannot see various shades of red and green.

27. One of the most common difficulties faced by color blind people on a day-to-day basis is matching their clothes and socks, so they are often found to be mismatched from time to time. They even struggle a lot buying matching clothes when shopping.

28. Anomaloscope is known to be the most accurate color blindness test. Developed in the 20th century, it is used by eye specialists all over the world. The test requires the person to match two different light sources to get two same colors.

29. Dr. Shinobu Ishihara developed the Ishihara plates test, which is most widely used to screen if a person has a color vision deficiency.

30. John Dalton, the pioneer in the development of atomic studies, could only recognize blue, purple, and yellow color. He did extensive research on color blindness in his lifetime and wrote the first known scientific paper on it.

31. Colorblind people in Romania and Turkey are denied a driver’s license. The law is based on the fear that color-blind drivers could not read traffic signals.

32. According to a study of male adolescents published in the Journal of Child Neurology, there is an association between color blindness and the occurrence of migraines.

Related: 10 Pertinent Facts About Loneliness And How It Affects The Mind And Body

33. Color blindness cannot limit you from enjoying life or achieving your dreams and ambitions. You just need to master some adaptation techniques and get the right support. A lot of famous personalities had rocking life in spite of color blindness

1. Mark Zuckerberg suffers from red-green color blindness. In fact, this is the reason why Facebook’s primary color scheme is blue.

2. Bill Clinton, who served as the 42nd president of the United States, has trouble distinguishing between red and green color. He inherited his color vision deficiency from his parents. He needs a special light in order to determine the color of a certain object.

3. Mark Twain, known as the father of American literature was red-green color blind.

4. Christopher Nolan, the Hollywood director, and producer of masterpieces like “Inception”, “ Batman ”, “ Memento ”, and “ The Prestige ”, was red/green color blind.

5. Bing Crosby, one of the best-selling recording artists of the 20th century and winner of Academy Award for Best Actor was color blind.

6. Howie Mandel, the brilliant actor, who was the voice between the unforgettable creature Gizmo in the hit film “Gremlins” stated in an interview with Good Housekeeping Magazine, “I’m color-blind” and when asked about opinions on the home decorations, there was constant reply – “The color crashes”.

10. Emerson Moser, the senior crayon maker for Crayola, molded approximately 1.4 billion crayons during his 37-year career with the company, was blue-green color blind.

Related: Doppelganger Quiz: Which Celebrity Do You Look Alike?

11. Hug Down, one of the most popular and retired American broadcaster, television host, news anchor, is severely color blinded and depends on his wife to help him with clothing choices.

12. Matt Lauer, started as a sideline reporter and turned out to be the best host of NBC, has been named best-dressed man on many lists including Vanity Fair’s International Best-Dressed List in 2008 despite having mild color vision deficiency.

13. Paul Newman, the screen legend and winner of Oscar and Emmy Award, who is also popular for his blue eyes, couldn’t fulfill his dream of becoming a pilot for Navy for his color blindness.

14. Prince William, Duke of Cambridge, and the heartthrob of millions of girls on Earth, has stated publicly that he is color blind.