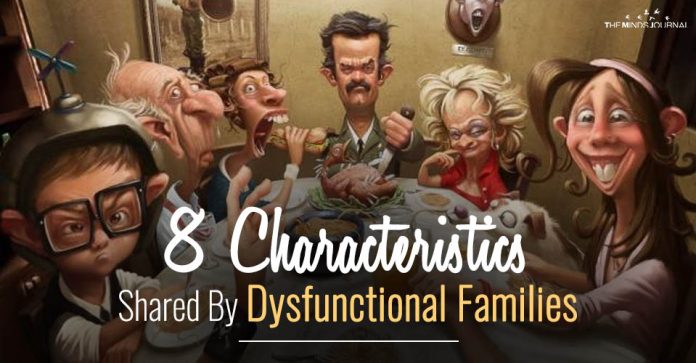 Imagine a scene where the parents give each other the cold shoulder at breakfast and the child at the table senses something is off but knows trouble will break out if they talk about it.

Unsaid things and as a result, ignored feelings are a classic symptom shared by many dysfunctional families.

Remember the point I had made about A earlier, about how she would be met with inappropriate humor.

So in effect, there was someone wanting to be heard for what they were experiencing and someone else, in this case a caregiver, who neither had the patience to go through the process nor the interest in actually getting to know where A was really coming from.

Across many dysfunctional families, run the themes of unemployment, drug and/or alcohol abuse, mental illnesses and extra-marital affairs.

By their very nature, these situations are fraught with one common thing – neglect.

Neglect between parent and child, between parents, neglect between siblings, it all is too common in families that don’t have stability and security tied into their inner fabric. This kind of neglect, added to all the other problems, contributes to lack of peace and even long-term emotional and psychological disturbances for the people involved.

When the child is neglected by the ones they hold as the dearest there is nothing more painful and this invariably leads to the feelings of low self-worth as one starts to feel that “If my feelings are not worth a hearing, I too am not worth any good.” (4)

For a family to journey together through thick and thin, if there’s one thing apart from love that it needs, then that’s empathy. And sadly, this is a sentiment rarely displayed or never at all in dysfunctional homes.

This means there is always a sense of conditionality woven into relationships between different people, especially those between parents and children.

For families with perfectionist parents, empathy is a really far cry and children often end up feeling like they are walking on egg shells. (5)

Almost as a corollary, constant criticism is to be found wherever there is an absence of empathy.

Children who grow up in such an environment are enveloped with a fear of rejection and embarrassment.

While lessons and experiential learning are part of every family, it ultimately boils down to how messages are conveyed.In dysfunctional families, they can be disproportionately harsh and ridden with extremes of emotions such as anger, rage and bitterness. (6)

No communication or lack of it wreaks havoc in dysfunctional families. The reasons again are many.

Disturbed attachment patterns (between parents first and then between parents and children), substance use and abuse, violence and unresolved trauma in caregivers often lead to communication that’s either skewed or missing altogether.

Children growing up in a confusing and anxiety-ridden atmosphere tend to develop issues early on, though the discoveries are sometimes made much later.

It is every person’s wish to want to belong and be cared for as part of a family that will stand up for one another. Unfortunately, many of us find ourselves in personal situations that are not just unsafe but also far from sustainable.

It serves to develop an awareness of where you are and what you can do about it, even if the steps are small and nuanced.

Walking away isn’t always an option, but changes in behaviour and responses can be helpful, especially if children are involved in the picture.