A Buddhist Story About The Virtue Of Patience And Mental Peace 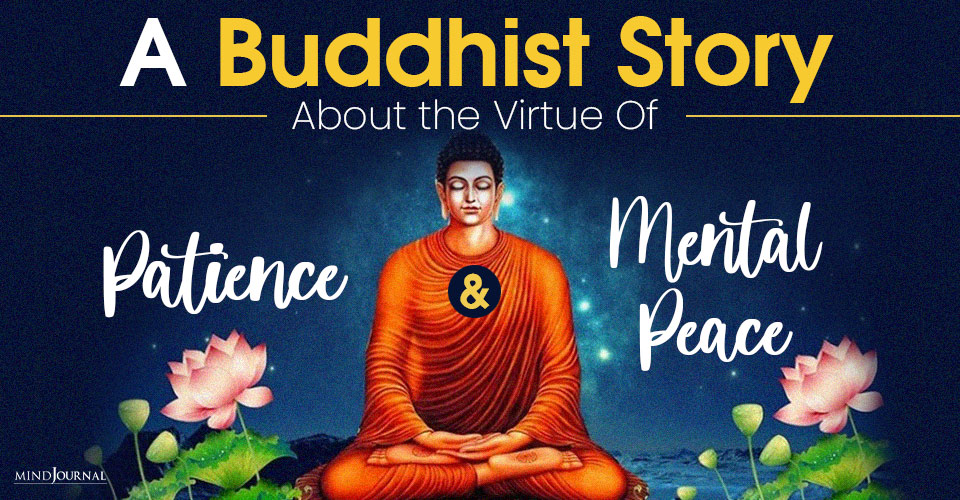 Sometimes a simple but profound Buddhist story can teach you what life is truly all about, and what are the things that actually matter in life. Especially when everything seems superficial, overwhelming, and confusing.

Life today has become so fast-paced, and instantaneous, that people have become used to getting everything instantly. And not to forget, there are a ton of distractions around, both external and internal to tempt you to give up one thing for something else that might seem better.

You wander from one place to another, not knowing what it is you really and truly want, and satisfy yourself with instant gratification.

And when you add your inner voice to this equation, things get more complicated. Why do you think most people are not good at being patient? Your inner voice is constantly speaking to you, which then leads to a perpetual state of worry, leading to overthinking and coming up with theories about why you SHOULD NOT wait.

It’s a vicious cycle, and no wonder you get addicted to it. So, how do you get out of these mental traps, which are self-imposed for the most part? Maybe this Buddhist story about patience can help you to get an answer to that.

Related: Equanimity: The Buddhist Philosophy For Cultivating Wisdom and Compassion

A Remarkable Buddhist Story About Patience, And Mental Peace

Buddha along with his disciples had embarked on a journey, in which they had to cross numerous cities and territories to reach their destination.

While on their way, they came across a lake far away, so they decided to stop and rest for a bit, as they were quite thirsty. Buddha asked his youngest disciple, who was also the most impatient, to bring him some water.

The disciple started walking to the lake, but when he reached there, he found a wagon of oxen crossing it. He noticed that due to this, the water gradually became muddy, and he wondered how could he give this dirty water to Buddha. So he went back and told him that the water was too muddy and cloudy, and it is not fit for them to drink.

A few minutes later, Buddha again asked him to go to the lake and fetch some water for him to drink. Nonetheless, the water was still as dirty as before. The disciple came back to Buddha and said the same thing, the water is still too dirty to drink.

Hearing this, Buddha did not answer. He did not say a single word, nor did he make any movement whatsoever; he just kept sitting there quietly.

After some time, Buddha asked the disciple to go to the lake again for some water, and because the disciple did not want to challenge him, he went to the lake again. However, he was furious and was constantly wondering why Buddha was sending him, again and again, to fetch water from the lake, despite knowing that the water is dirty and not drinkable. However, when he reached the lake, he discovered that the water was clean and crystal clear.

He was surprised but still took the water and went back to Buddha. Buddha asked what did he do to clean the water. The disciple could not answer the question, because he actually did not do anything.

Buddha looked at him, and said, “You gave it time, and you waited. You let it be. With time the mud settled, and the water became clean again. Your mind is like the water too. If it’s cloudy and muddy, you should let it be, and give it some time.

Being impatient won’t help you or the situation you are in, so you need to learn to be patient. If you are patient, your mind will get balanced on its own, and you don’t have to work very hard to make it peaceful. Everything will fall into place, as long as you don’t force them, and don’t hold on to them.”