How To Stop The Blame Game In Your Relationship 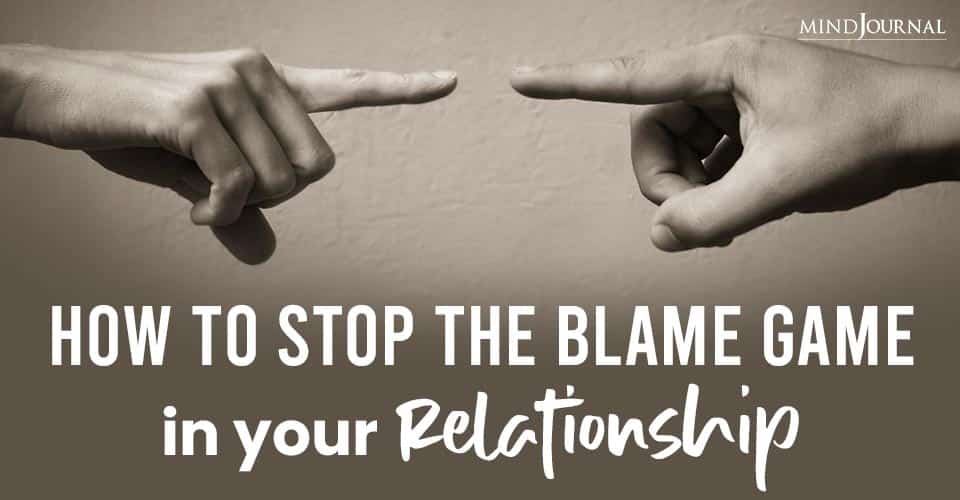 When we blame others for what we say, think and do; we give away our power.  It also damages the relationship because we stop acknowledging and addressing the real problems.

Ignored issues only get bigger.

The often unconscious thought process for those who blame their spouse is “if I blame myself I will feel inadequate. If I blame my spouse I may get what I want.”  It never works but thinking this way may make them continue to find reassurance in blaming.

Mike was having a stressful time in the office and instead of blaming work, he was blaming his wife for his stress because she didn’t make the home as tidy and as quiet as he liked.

For such men and women, their spouse is playing the role of the scapegoat.  It protects the self-esteem but it harms the marriage.

The more a person is insecure the more they will resort to blaming. This is where compassion can come in recognizing that blaming is often not personal, just a way of coping with insecurities.

Sometimes people blame because that is what they have learned to do throughout their life, where blaming has become a habit. Often a person will pick this up from a parent or influential figure growing up. People that do this may not know how to deal with conflict or relationship problems in a healthy way. I have someone like this in my close family, it still amazes me how they are never at fault.

To the point where even if they did something, they will blame it on someone else for not telling them to or not to. They will even blame the TV or radio show for their actions!  It took me some time to realize that these people can’t tolerate responsibility for their actions. I  used to get angry but now I really feel for them, they don’t have another way to deal with problems or the courage to look within or accept they may have made a mistake.

Related: 2 Reasons Why The Abuser Blames You Even When You Are The Victim

The great thing about a partner who blames is that they are expressing their viewpoint and the existence of problems. This is healthier for the marriage than bottling up frustrations inside. As denial of problems and burying one’s head in the sand makes it far more difficult to resolve issues. It is also a sign of wanting the relationship to change for the better.

A person who blames will stop blaming if they no longer care about the relationship. When people give up complaining it is often because they feel hopeless. So even if they see the only way to improve the marriage as your improving yourself, it’s an indication they care. and you can use the blame to create change.

Related: The Narcissist Blames You! It’s ALWAYS Your Fault

Why Do We Need To Stop the Blame Game In Relationship?

Blaming is self-destructive – it disempowering rather than empowering. It hurts the relationship and blocks closeness. The fact is people who blame create more negativity for themselves and others.

If you allow your spouse to repeatedly blame you, you will eventually emotionally reject your spouse.  There is nothing loving about allowing yourself to be someone’s victim and vice versa.

Marriage counselling often focuses on blame. Where a couple goes and each takes it in turns to share why they think their partner is at fault for the problems. Which is why my approach to strengthening marriages is very different. There is no blame or no painful conversations.