3 Ways to Keep from Committing Too Soon 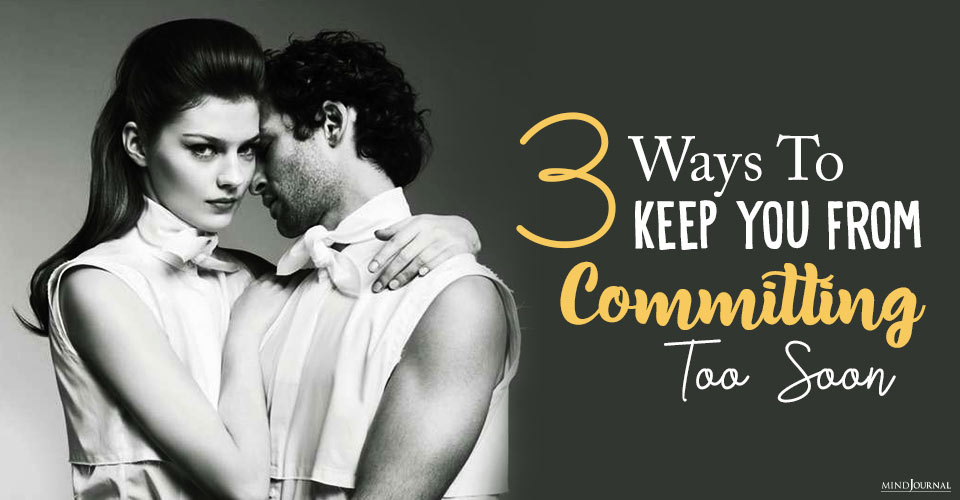 You’ve been out with him three times now, and things are going really well! You’re ready to take it to the next level, and you’re thinking about all the fun things the two of you will do together in the future. On your fourth date, you have sex, and it’s amazing! You’re high with endorphins and happier than you’ve been in a long time….

Fast forward two weeks. He’s not texting you as much and you don’t understand why. You’ve asked him if everything is ok, and he says yes, things have just been busier lately. You try to wait for him to text you and ask you out again. But he doesn’t, so you text him, and sooner or later he stops responding altogether. You’re left with no closure, no idea what happened, and you’re spending all of your mental energy on trying to figure it out.

Related: 11 Ways You Can Avoid Rushing In Love Too Soon

Even though you only went out three times, you felt very attached to him. Losing him feels like a big loss. You had intimate experiences, you trusted him, and you were imagining all the amazing things you were going to do together in the future. You’re feeling the loss of his presence, his attention, the excitement, and the loss of the future you were so hopeful about.

First of all, this is a truly painful experience. You may be tempted to blame yourself for not being good enough for him. Or, you may beat yourself up for not saying the right thing. The truth is, that person behaved that way because of who he is, not because of who you are or anything you did. Take your anger, and put it on him because he hurt you and he deserves to take responsibility for his actions.

Second of all, with the right knowledge and skills, you can stop going through this for good. There are reasons you’re getting too attached too soon, and he isn’t. Learning the following relational skills can empower you on your dating journey.

These tips will teach you how to stop getting attached too soon, so you can stop wasting time on the wrong men and find the right one sooner.

Things felt fun, exciting, and sexy. You flirted… he flirted… you felt desired… attracted… conversation flowed and it felt easy. So, naturally, you assumed you must have potential together as a couple. And that’s where you made the mistake of confusing attraction with connection and compatibility.

That initial attraction and excitement has nothing to do with who you both really are because you don’t know each other yet. Until you know each other, there’s no reason to think you’re compatible no matter how sexy he is, how good he looks on paper, or how good he makes you feel.

It takes time to see who he is and what he’s about. Don’t get attached to his attention and the excitement. Don’t confuse how his attention makes you feel and who he is. Take the time to get to know him, and see if he’s worth getting attached to.

Related: Emotional Attachment: 5 Reasons Why You Get Attached Too Soon