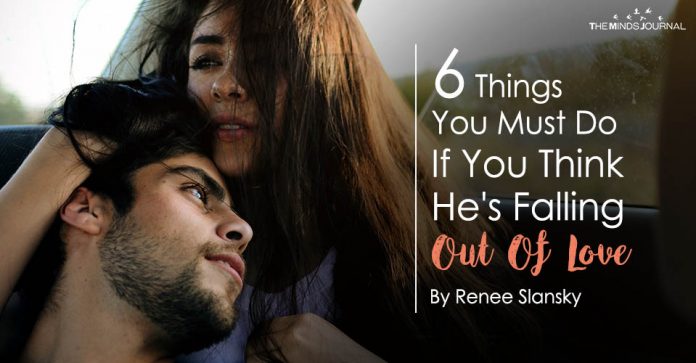 It’s that awful squeezing feeling you get in your gut, which turns into the kind of anxiety that feels like an emotional punch in the face …

That moment when you realize the man you love has started to distance himself from you and pull away.

This isn’t so much about him wanting man-space, but rather a shift you feel in his approach to you and your relationship. You don’t want to admit it, because that hurts like hell, but you can sense he is actually falling out of love with you. Ugh!

It’s normal to freak out and want to act irrationally to do anything to save your relationship — especially when you are in love with him and didn’t seen this change coming.

Before you panic and act out of desperation — which is sure to drive him further away — try these 6 steps immediately to turn your relationship around.

Change and growth is a part of any relationship, and there will always be seasons that are more difficult than others. Remember to focus on the bigger picture. Just because his attitude seems to have changed a little, it doesn’t signify a definitive end, and it doesn’t mean it can’t change back.

Now that you’ve identified there is a problem, it’s best to not let your mind go crazy inventing possible melodramatic outcomes.

2. Don’t let your emotions take over your brain.

Try not to act and speak out of your emotions (Within reason. We are human after all). Try to really think about things practically. When you decide to chat with him about it, make sure you choose a time when your emotions aren’t heightened, like when you have your period, after you’ve indulged in a glass of wine (or a few).

3. Talk to him about everything.

Communication is the key here because somewhere along the way there has been a breakdown in communication in the first place, resulting in him wanting to hold back. Tell him you’ve noticed a change, ask him how he feels and if there is something you can do on your part. Try to remain objective and calm during his answers (because you might not like them!).

But be honest with yourself — and him. This isn’t about pointing the finger, but rather trying to work out your issues. You can’t force an answer out of a man, unfortunately, but you can try to initiate a real conversation.

4. Have a good look at what you may be doing wrong — and right.

Relationships are a two-way street. Sometimes we start to build habits into our lives that can affect our marriage or partnership negatively without us even being aware of it. Have you done something that contributed to his withdrawal? This could be anything from letting yourself go, losing your sense of purpose, forgetting to show your love. etc.

Don’t be too harsh with yourself, this isn’t about self-condemnation, but rather being accountable for your part in the relationship.

5. Change the focus and start working on the solutions.

Once you’ve spoken to him and worked out what the issues are, it’s time to shift the focus. Depending on what the contributing problems are, you then need to work on the solutions for those areas together.

Whether it’s taking more effort with your appearance or perhaps working on your own dreams and finding yourself again, put the change into action to be able to make a difference in the situation. Crying and wishing may seem easier, but they really aren’t going to solve anything.

Men need to be romanced just like women do. Maybe not in the same way or as much, but it still needs to happen. What did you do to originally capture his heart? Who were you when you first met him?

We can become complacent and comfortable after time has gone by in a relationship. Treat someone the way you treated them when you first met them (within reason) and surely you will constantly recapturing each other’s hearts and attention.

7 Ways to Improve Your Relationship

How Your Attachment Style Affects Your Relationship 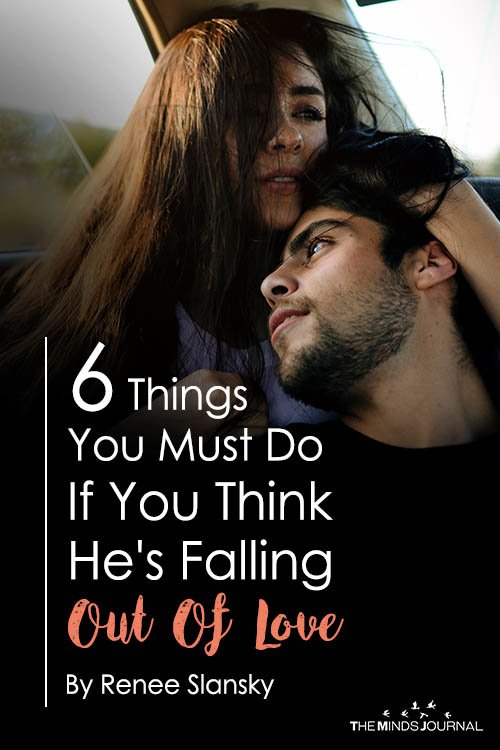 Renee Slanskyhttp://www.TheDatingDirectory.co
Renee Slansky is an Australian TV presenter, writer, professional blogger and dating and relationship coach, whose purpose and heart for women compelled her to educate people on how to find, build and cultivate healthy and fulfilling relationships. Her own blog www.thedatingdirectory.co is now the number 1 dating and relationship blog in Australia. Renee contributes advice regularly to some of the biggest online dating sites and publications globally including The Huffington Post, E Harmony, Plenty of Fish, Your Tango, MamaMia, The Good Men Project, The Love Destination and Yahoo 7. As a professional coach, Renee has built online programmes for women and mentors both men and women around the world. She is often called to comment as an expert for on the radio and Channel 7's The Morning Show and Sunrise and speaks at events. Her mission to educate a generation, change the dating culture and lower the divorce rate.
-Adverts-