10 Signs You’re Dating A Woman, Not A Girl 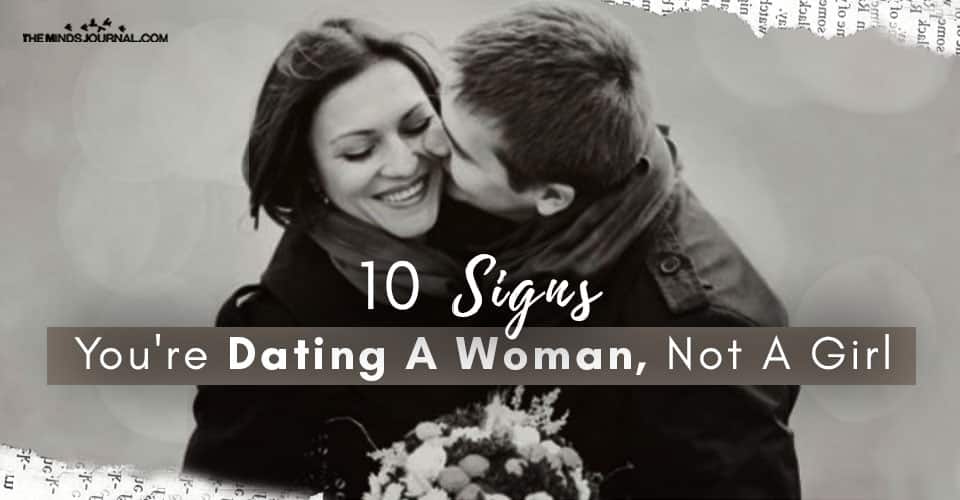 When it comes to the spectrum of dating and relationships, how would you know for sure that you’re dating a woman and not a girl?

It has been seen time and again, that most of the time men prefer to be with women who are smart, sorted, and mature.

Many men prefer to be around women who act their age and think and live independently. Women and girls have a different point of view of the world and romance in different ways.

Men like women who are sure of themselves, know what they want, and are not afraid to go for it.

Here Are 10 Signs That You’re Dating A Woman, Not A Girl

1. Women know how to dress well.

When you’re dating a woman, you will notice that she takes her appearance seriously but is not completely obsessed with it. She knows what it takes to look presentable and well-dressed.

She tries to make sure that she knows what works on her, and never wears anything and everything just because it’s fashionable.

It is not possible for men to read minds all the time. Yes, as a loving partner, it is important to understand what your partner wants from you, but that doesn’t mean men are supposed to be telepaths.

Mature women choose to communicate clearly about what they want or what is bothering them, instead of expecting men to magically understand what is going on in their minds. They know that one of the biggest secrets for making a relationship work is clear and transparent communication.

3. Women do not expect men to pay for everything.

Men genuinely respect those women, who don’t expect men to foot every bill. Just because you are a woman, that does not mean that you don’t have to pay for anything. Even though many women tend to do this, mature and classy women never try to take advantage of a man or his money.

If they want to buy something, they will always choose to buy it with their own money. If they go out for dinner, either they will split the bill or offer to pay for it themselves.

4. Women can hold their drinks.

Everyone has a funny drunk story, but if you are someone who pukes their guts out every time you drink, that’s not cool. Men tend to like women who know how to hold their liquor. Puking everywhere and making a fool of themselves every time they drink, is not something to look forward to.

5. Women are not addicted to social media.

Women love social media but they are not addicted to it, nor do their lives revolve around it. Unlike girls, who gossip and obsess about what someone posted on Facebook or Instagram.

Women might be active in social media but they don’t run to it the moment a notification pops. They know that they have better things to do in life than having their nose stuck to their phones.

6. Women love to gain as much knowledge as they can.

You know you’re dating a woman when she prefers reading to sitting in front of the idiot box all day. No, watching television is not a negative thing, but if you spend your whole day doing that, is that really productive?

Women are always looking to better themselves from every aspect, and that is why they love reading. Reading everyday is a healthy habit, which can help you be not just a more knowledgeable person, but also a better one.

Want to know more about how you know that you’re dating a woman and not a girl? Read 10 Things A Confident Strong Woman Will Do Differently

7. Women are well-read and are knowledgeable.

A lot of mature women on the other hand have fascinating hobbies and can hold complete conversations on their own. They don’t like indulging in petty gossip and prefer to talk about important things that are going on in the world.

8. Women take care of themselves without showing off.

They respect their bodies and unlike girls do not show off the fact that they are healthy. A smart woman will eat a burger without being too fussy and down a pint of beer with a man if she wants.

She will also eat healthy without shouting about it from the rooftops, because she is doing it for herself, not to show-off in front of others.

9. Women know what they want from life.

They are driven and love meeting new people. Women want to fulfill all their goals, and reach new heights, are they are ready to work hard for it. Girls often depend on others and find love as a crutch to live.

Women are always focused on breaking the glass ceiling, and they are ready to grind to make their dreams come true.

Women never depend on anyone, and always try to fend for themselves. They are independent and strong individuals, who believe in themselves, and always focus on getting their job done by themselves.

So, if you are dating someone like this, you have hit the jackpot! Mature and string women are difficult to come by, and if you are in a relationship with one, then consider yourself very lucky.

If you want to know more about the signs that you’re dating a woman, and not a girl, then check this video out below: