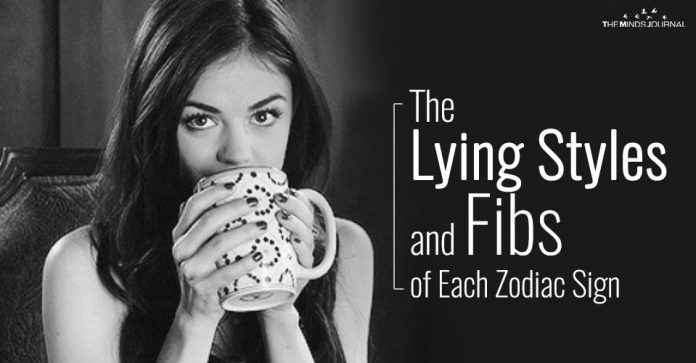 The Lying Styles and Fibs of Each Zodiac Sign

Do you want to know about the lying styles of each zodiac?

Nobody is perfect and we can all agree that everyone has their weak spots. While some of us have a great poker face like the natural storyteller Gemini or the straight forward Aries, who prefers to be honest, it’s best to acquaint ourselves with our flaws. Each zodiac sign has its own lying styles.

If you are a tad irritated by a loved one and their style of fibbing, keep reading to confirm your speculations.

Let’s find out the lying styles of each zodiac sign.

Your average Ram doesn’t lie much. It’s too time-consuming, and the reaction they’ll get when they have to answer truthfully is just too much drama for them to stir up. If you do call them out on a fib, though, don’t be scared – their defensive bark is worse than their caught-red-handed bite.

This quality-conscious sign loves the good things in life, so they need to make money. Lots of money. So that’s their usual weak spot. If they say they don’t have cash on them or that they’re broke, don’t believe it. Neither is usually true.

Here’s a truly tough sign to catch in a lie. They’re natural storytellers, so they’re good liars. To make things worse – or better – they’re so chatty and personable that you’ll be entertained by the stories they tell you, and you won’t care if they’re based on fact or fiction. This is one of the most important lying signs of this zodiac.

These home-oriented types are the nurturers of the Zodiac, so when they lie to you, they’ll be stroking your hair and telling you that everything will be just fine and that you shouldn’t worry. If you’re still concerned, though, trust your intuition, and prepare yourself for an unpleasant truth.

Leos are notoriously good at this “sport” – mostly because they think of deception as a form of entertainment. When they tell you a story, if you applaud, they’ll keep going – which is how you’ll trap them. Be gentle. After all, it’s better than television.

Here’s another sign that hates to lie – unless the truth will interfere with the successful completion of an assigned task. In that case, given the efficiency factor, they’ll estimate that the fallout from being found out will be less harmful than the effect of the truth.

There will be days when you have to rummage through the heaps of negativity in your life just to find that nugget of positivity. Make it happen and stay positive. What is a good reason you should stay positive based on your zodiac sign?
Read more
wpDiscuz
0
0
Would love your thoughts, please comment.x
()
x
| Reply