The One Thing You Cannot Handle Based On Your Zodiac Sign 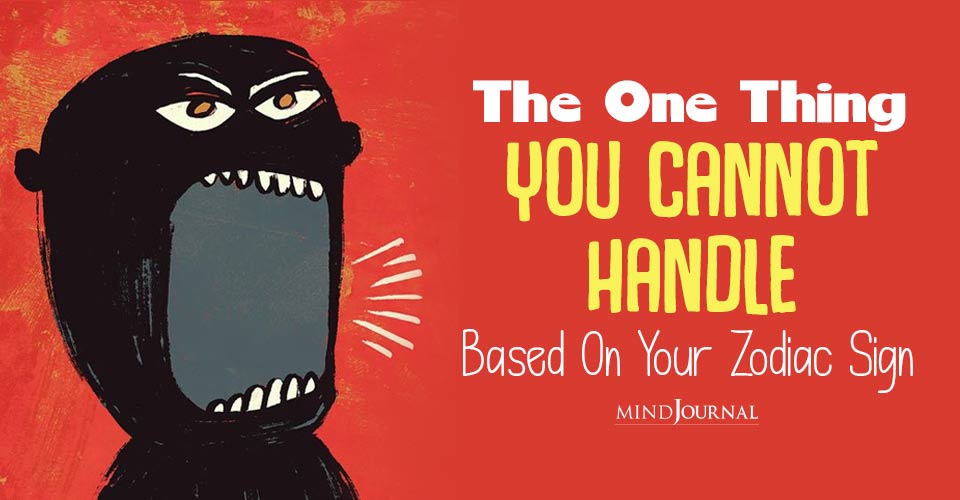 All of us have our highs and lows in life. While some of you have already got a sneak peek into the roaring self of yours that lies behind the sweet and timid face, some of you are left to discover the other side of you.

Everyone has a good side and a bad side, and there are no two ways about it. So what is it that one thing you cannot handle?

Some people get angry at the tiniest of things, and some people don’t get angry that easily, but when they do, you should run for your life. Anger is a very subjective thing, and it’s not the same experience for everybody.

One of the best ways to know what angers someone the most is by observing their zodiac sign. Astrology has always been an interesting science that has piqued the interest of people since time immemorial.

And the more you know yourself and what sets you off, the more you will be able to work on it. So, what are the things that upset you? Let’s find out!

The One Thing That Gets On Your Nerves, Based On Your Zodiac Sign

When they are ignored by others.

It’s very easy to get on their nerves, because they are extremely short-tempered, and are always looking for an excuse to fight and argue with people. It really doesn’t take much to irk them.

But, if you don’t give in to their tantrums and just choose to ignore them, that sets them off even further. Yes, Aries hates it when someone ignores them.

So, the best way to truly get on Aries’s nerves is by ignoring them completely. The more you don’t pay heed to them, the more they will stew in their anger and finally, when they have had enough, they will have a volcanic outburst.

When they or their opinions are not taken seriously.

Anyone who is a Taurus seems to suffer from a sense of superiority complex most of the time and believes that they can never be wrong. The prospect of being incorrect is simply unfathomable for them.

Their inherent superiority complex can make them fly into a terrifying rage every time someone contests or challenges their opinions. Another way to get on the nerves of this zodiac sign is by telling them that what they have done is not good enough and that they need to do more.

When they feel pressurized to do something.

If you are looking to anger this zodiac, then just give them a goal and tell them to fulfill it. Nothing irritates this sign more than the pressure to get something done.

The more you ask them to come through with something, the more they will start to lose it. Geminis are amazing people to be with, but this is their Kryptonite.

Whenever they feel that a sword is hanging over their head and they need to get something done as soon as possible, it freaks them out. And this feeling of fear then results in them losing it completely.

When they are held accountable for their actions.

Cancer might be all sweet, emotional, and kind beings but one thing that really gets on their nerves is when they are held accountable for their actions.

The best way to anger them is by calling them out on their wrongdoings and faults. They might know that what they have done is wrong, but they will still try to deny it.

When someone treats them badly.

A Leo surely behaves like the King of the Jungle. So when someone has the audacity to treat them badly, it riles them up like anything.

Leo is the best kind of person if they are treated with trust and compassion, but the exact opposite if someone tries to take them for granted and treats them horribly.

Leos might not always show it, but they are emotional beings who get hurt very easily when subjected to harsh treatment. Whether you say anything mean to them or simply just ignore them, it pisses them off to no end.

When someone has an opinion different from theirs.

The funny thing about Virgo is that there is hardly anything that doesn’t piss them off. Virgos are angered by anything and everything, so it’s no wonder that they are always seen as the uptight zodiac sign in the world of astrology.

But if there is something that completely pushes them over the edge, then that will be when someone has a different opinion from theirs.

Oh boy! Whenever someone disagrees with a Virgo and says that they might be wrong, they are just crossing over to dangerous territory. If you don’t agree with them 100%, no matter what they say and believe in, they will rain hellfire on you.

When someone discourages them to pursue their dreams.

A Libra is one of the kindest creatures that walk on the earth. Though the feet of a Libra are always humble enough to touch the ground, their mind roams elsewhere in their dreamland.

Libra is the kind of person who keeps their hopes high and chases their dream till they achieve the same. They have many goals and ambitions that they want to fulfill because they want to have their own identity.

In case someone ends up telling them something negative regarding their dreams or plays a spoilsport by making them feel that their dreams are stupid, then all hell will break loose. Their dreams are everything to them, and to tell them that it’s dumb is just poking the belly of the dragon.

When someone acts stupid or idiotic in front of them.

It is a widely known fact that Scorpios exist in a world of aggression and anger but surprisingly they don’t lose their temper often. But if there’s one thing that can get on the nerves of this volatile zodiac sign is that stupidity and idiocy.

The moment they see someone being stupid, it’s then that they lose their patience and their temper.

You don’t have to have an IQ of 200, but since they are an intelligent sign they expect some amount of intelligence and smartness from others. When someone ends up making a stupid mistake around them, it bothers them to no end.

When they are asked for more of their time.

Sagittarius is known as the loner in the astrology world, and they always spend time with others according to their whims and fancies.

They might be very charismatic and all, and they might also love spending time with others, but if you want to truly get on their nerves, then tell them to give you more than what they are already giving.

The moment someone pushes them to do more than what they are already doing, that’s the moment they lose it and run away as far as they can.

When they are told how to do their job.

Capricorns are known to be perfectionists and they are always very organized in everything they do. They like being in control, and they are very proud of their abilities and the way they handle everything.

So when someone comes up to them and tells them how to do their job, you can imagine how annoyed they can feel.

The moment they are told how to do things and worse, how to do them better, it’s destination doom. They might even punch you in the face for doing that to them.

When their creative ideas and the zeal to explore are not taken seriously.

An Aquarius travels on their own quest. Aquarius is the kind of person who avoids competition and takes a new route that nobody has taken before. They are always the ones to explore things and places that haven’t been explored before; in a way, they are pioneers of many new and interesting things.

So, whenever their creativity, and zeal for adventure and exploration is insulted or discouraged, it angers them to no end. By doing this, you are basically disrespecting who they are on a fundamental level.

When they don’t get the adoration and appreciation they think they deserve.

Pisces thrives on attention, adoration, and compliments. They love it when they are complimented for everything they do. But when that doesn’t happen, they slowly go down the drain and into their angry zone.

They are always fishing for attention and compliments, and when they don’t get it, they have trouble being happy.

If you want to get on their nerves, just don’t give them what they want and see how it angers them. And once they are angry, the tears will start flowing and that might end up making you angry!

So, these are the things that anger you! Which zodiac sign do you have and what is that one thing you cannot handle at all? Let us know your thoughts in the comments down below!

previous5 Ways To Survive the Holidays While In A Toxic Relationship
nextWhat Is Emotional Intelligence And Why Is It An Important Skill?