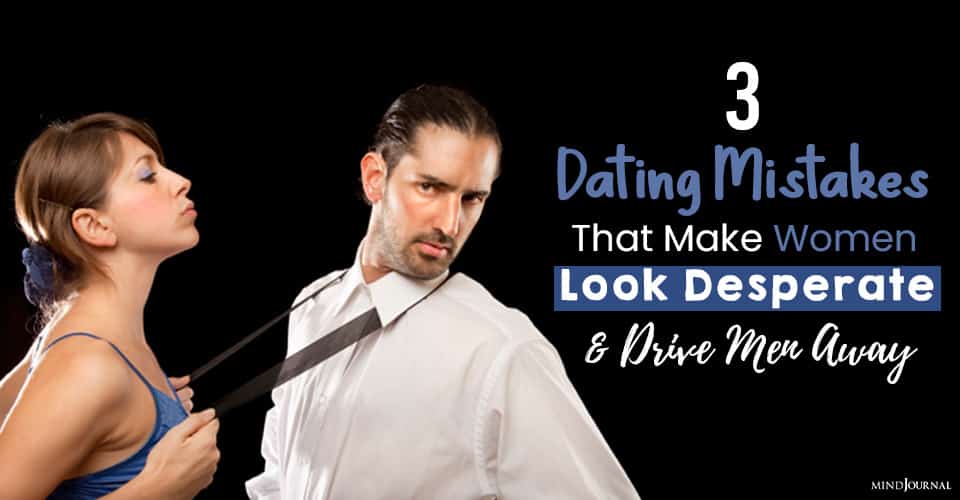 Are you trying too hard to get him to like you? Are you scaring men away, and don’t even realize it? Sometimes, no matter how heartfelt and genuine your efforts might be, some of them can end up making you look desperate in the eyes of men, and drive them away.

When you meet a new guy you really like and feel major attraction to, it’s easy to wonder if he feels the same way. But in your eagerness to learn how to get this guy to like you, or to make him chase you, you might be appearing desperate and pushing him away.

Signs of attraction between people aren’t always obvious, and each approach the relationship with different goals in mind. But if you’re acting out of desperation that you’re going to “lose” the guy you like, you might be the reason your relationship isn’t going anywhere.

Think you’re just being “friendly” by sending him a flirty text or baking him a birthday cake? Truth is, you’re probably doing more harm than good and pushing him away instead.

When you find yourself falling for a man, it’s normal to start feeling that if you don’t show enough interest in him he might get the wrong message and drift away. You want to make sure he knows you like him, but you need to do it without going overboard and making yourself look desperate.

Related: 11 Mistakes Stopping You From Finding The One (and What To Do About It)

Here are 3 dating and relationship mistakes that make women look desperate and don’t get a guy to like them — but chase men away.

When he’s always on your mind, it’s natural to want to let him know it. But if you find yourself doing any of the following more often than he does, it’s a red flag:

1. Calling him because you heard or read about something interesting, or because you knew there was a great band playing somewhere, or someone told you about some great event that you want to invite him to.

2. Calling to ask why he hasn’t called you.

3. E-mailing him, texting him, Facebooking him, sending him a cute card, dropping by his house, or in any way attempting to initiate some kind of contact.

5. Inviting him to come and join you, or in any way acting like the social director of the relationship.

At first glance, these actions might seem completely harmless. In fact, you may feel that he’ll just see you as being friendly, maybe even take it as a compliment, and want to get closer to you. But doing any of these things shifts you into masculine energy which could actually be scaring him away.

At best, when a man feels even a little bit pursued, he’ll feel he doesn’t have to work so hard to win you over and will immediately drop his efforts. At worse, he’ll start to feel more than just “pursued.”

If you keep checking in with him in all those friendly little ways that are really about getting the reassurance you need, he’ll start to get that “chased” feeling. And then he’ll do what anyone would do when feeling crowded, smothered, or pressured — he’ll start moving away from you.

Whether you realize it or not, the urge to do all of these friendly things comes from just one place — your fear of losing a man by failing to let him know you’re interested in him. But you couldn’t be more wrong. By giving in to this fear, you’re in worse danger of scaring a man off for good.