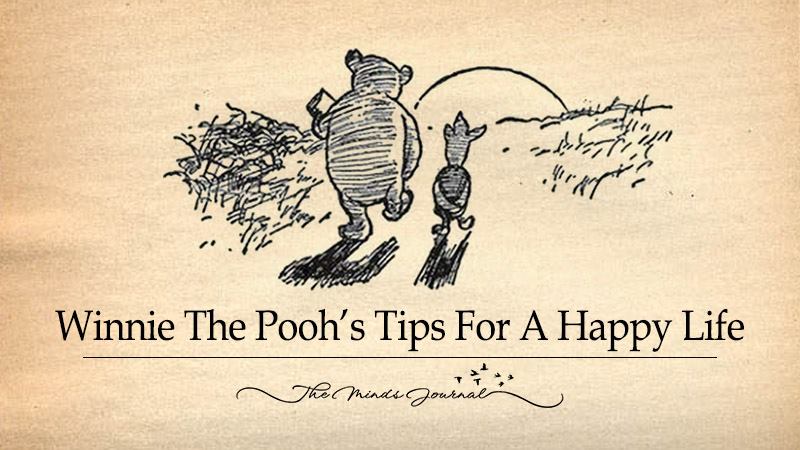 Winnie The Pooh’s Tips For A Happy Life

Throughout all of his adventures, Winnie the Pooh has learned an awful lot about how to live a happy life. Here are some of the best ones:

As Pooh states to Piglet when Piglet proposes giving Eeyore a balloon for a birthday present, “Nobody can be uncheered with a balloon.” A balloon isn’t a big thing, or an important thing, but it’s a noticeable thing, and Piglet wants to give it to Eeyore to celebrate his birthday. The balloon is just an item that stands for a feeling, that shows Eeyore that Piglet loves him. It’s the little things that really count, so take a moment to appreciate them. A cup of coffee in the morning, a smile from a friend, a kind word from (or to!) a stranger. If your happiness revolves solely around the big things -the promotion, the new house, the better car- you’re missing out on a lot of life. So take some time to enjoy the little things too.

2) TRY DOING NOTHING ONCE IN A WHILE.

Pooh says, “Don’t underestimate the value of Doing Nothing, of just going along, listening to all the things you can’t hear, and not bothering.” While working towards fulfilling goals and accomplishments feels good and should be lauded, so in fact should Doing Nothing. If anything, Doing Nothing might be an even greater accomplishment, because we are so oriented towards success being measured by accomplishment.

One of my favorite quotes is “don’t just do something; stand there.” It was first printed in 1945 in an advice column penned by Leonard Lyons and has been used and attributed to many others since, from the White Rabbit to Clint Eastwood. Keeping one’s self busy isn’t always necessary, especially if that’s the only point of it. Better then to be still, be present, be observant. Not to just do for no reason whatever, but instead to simply just be.

We all get squirelly here and there, and I for one can have a really hard time getting my head out of a “sneaky hate spiral” or other negative thinking. As Pooh says, “It is more fun to talk with someone who doesn’t use long, difficult words but rather short, easy words like “What about lunch?”” Long, difficult words can be interesting to employ and fun to use but they can be frustrating and make conversations inaccessible. One of the easiest ways to be positive is, in fact, in conversation. I strive to keep conversations positive because I will be so much more likely to remain positive myself if my interactions with others are positive as well.

4) BREAK OUT OF YOUR COMFORT ZONE.

Pooh says, “You can’t stay in your corner of the Forest waiting for others to come to you. You have to go to them sometimes.” It can be easy for us to stay in our corners of the Forest instead of venturing out and about, but breaking habits and routines, even in really simple ways like taking a new route to work in the morning or the stairs instead of the elevator, can alter our lives in wonderful ways. Developing a new perspective, seeing the world with fresh eyes and being able to relate to where others are coming from all rely on diversifying our experiences. Which means leaving our corners of the Forest and venturing out of our comfort zones.

Pooh states: “You can’t help respecting anybody who can spell TUESDAY, even if he doesn’t spell it right; but spelling isn’t everything. There are days when spelling Tuesday simply doesn’t count.” Focusing on details can be really helpful when doing a work project or analyzing data. But constant scrutiny can mean missing the bigger picture and, in life, the big picture is what really matters. And ultimately, it’s mostly small stuff. So don’t sweat it!

Pooh’s teachings are fleshed out in a number of sources past the brilliant works by A. A. Milne.