Why You’re Bad At Relationships Based On Your Chinese Zodiac 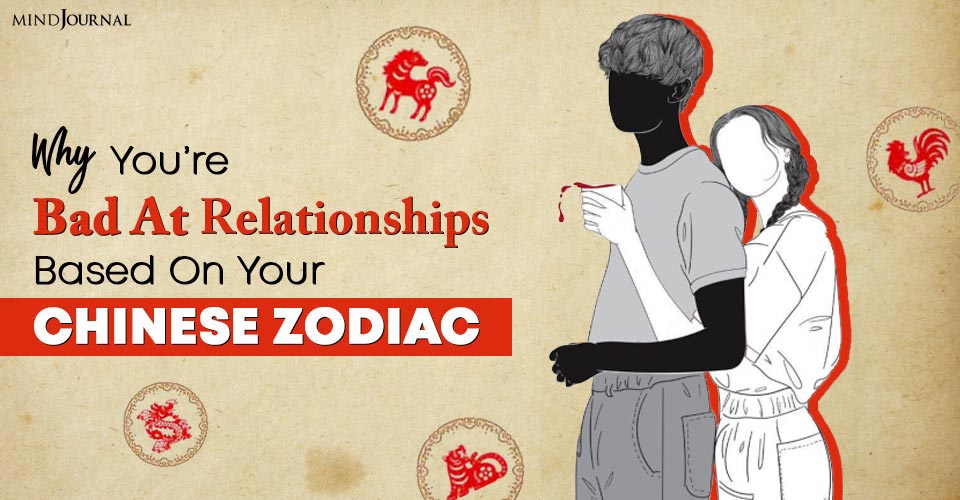 The Chinese zodiac is based on the lunar year and it comprises a 12-year cycle, in which each year is represented by a particular animal. The attributes of each animal correspond with the characteristics and personality of each person born in the year associated with that animal. It provides the relationship insight into how a person will get along with their partner, and also why they won’t. Why You’re Bad At Relationships Based On Your Chinese Zodiac.

You choose people who are emotionally unavailable.

When you choose people who are emotionally unavailable what you’re really choosing is the ending. If you know how something is going to turn out you can’t be surprised. And if you’re choosing someone who keeps you at arm’s length, it isn’t that you’re falling in love you’re infatuated. Love scares you and that’s why you choose the people you do.

You gravitate toward bad boys.

You like a challenge. You will never date someone who is safe and adores you or is completely into you. That’s too easy. You keep those guys in your back pocket for safekeeping. But you’ll always choose the complicated bad boy.

You jump ahead in your mind.

You tend to have long-term relationship goals too soon in relationships. It’s nice to play the game of what can this be but when it’s influencing the relationship so much you never get there, you have to take a step back and move slow.

You compare everyone to your ex.

We all have that one ex that was amazing. The one we wish we didn’t lose. But as you play the compassion game what you’re really doing is not giving a good person a fair shot.

Related: Why Your Relationships Keep Failing Based On Your Zodiac Sign

You question everyone and everything just because a few people have hurt you in the past. But don’t judge someone based on what others have done to you.

You let people back into your life who have hurt you.

There are some people who don’t deserve second chances.

You accept less than you deserve.

Accepting less than you deserve isn’t just disrespecting you yourself but it disrespects everyone who has ever treated you well consistently. Friends. Relationships. Family. If you can’t respect yourself enough to ask for more, do it for them.

Your date for sport.

You’ve dated so much you don’t even know what you want anymore. And if someone decent came into your life you wouldn’t even be able to recognize it.

Your standards are unrealistic.

Related: What You’ve Been Doing Wrong In Relationships Based on Your Zodiac Element

You’re not good at the whole loyalty thing.

You think you want a relationship but you get really bored quickly. You pine after someone you think you really want but even if you got them it wouldn’t last. You’re always going to be better at being single until you realize that grass isn’t greener on the other side.

You let everyone else take what’s yours.

Related: 6 Reasons Why We Stay In Bad Relationships

You let people walk all over you.

You don’t have a backbone and you’re always going to be with people who have dominant personalities and look to control you. You lose your voice in these relationships because you put your own needs aside.