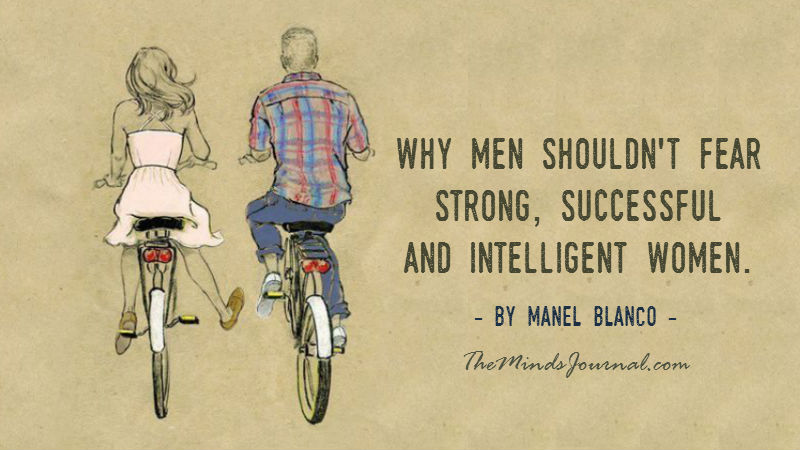 There are numerous articles claiming that men are afraid of strong, intelligent women. This is partly true, as not all men are fearful of this type of woman. It seems, however, to be a majority. The value of such articles is to create awareness. Once awareness has been raised, it is possible to move towards the solution through understanding.

The problem we face today, is an energy that has been flowing through society for centuries, establishing a set of false beliefs, separation, the supremacy of men over women and all living creatures promoted by the archaic values of a patriarchal society, which is tumbling on its foundations. These values and beliefs also contributed to men to adopt a series of attitudes and behaviors that helped to eclipse the beautiful expression of the divine masculine, as well as suffocating the divine feminine. Thus far, humanity has been living in shadows. How intelligent is that!

Fearing strong and intelligent women is nothing but a trapped energy in men. It is also an unconscious response. In order to change the perception when interacting with this type of woman, we must challenge the beliefs we hold on masculinity. From an early age, men are educated to be more of everything, and more than everyone. The competition is not only with women, it is also with other men. Setting such high standards serves to create anxiety when meeting our own limits, as well as separation and loneliness. It is a man against the world.

The future of humanity is cooperation with both men and women, and a renewed education system that teaches children to be human beings and live in peace and equality.

When a woman is strong and intelligent, she is likely to be confident about her attributes and capabilities. It is no wonder that in the competitive society we live in, women also feel the need to overpower others, including men, resulting in a type of behavior that in appearance might feel threatening. It is not. Instead is the assertiveness of the own self.

Intelligence is sexy.
Learn to dance to its rhythm.

An intelligent woman will know when to listen and when to talk. This is an advantage, as in the relationships between men and women, women are prone to interrupt, now allowing the interaction to flow. It’s not a matter of intelligence, but the urge to be heard. If she’s intelligent, she will allow the necessary spaces and tempos for a man to expand his conversation, feelings and desires. These are signs of interest in open and deep conversations and interactions. The relationship could vary in nature, and whether this is romantic, friendship or professional, an intelligent woman would act accordingly.

She will also find the strengths and natural abilities in a man, so as to help him to grow and improve. A woman can help a man to build an empire. The more intelligent she is, the more persistent she will be. Women naturally seek cooperation. If she’s gifted with a higher intelligence, she will use it to create. Intelligence is like water for growth.

Intelligence is a positive trait, not a weapon.

Anyone using intelligence to destroy anyone, whether this is a man or a woman, might not be as intelligent as they thought or perhaps do not understand the nature, value or use of intelligence.

More intelligence in most cases means more knowledge, and more resources to face and resolve situations. If she’s strong, she will share that knowledge and encourage a man to use it for his own benefit. Knowledge only has power when it’s shared.

Conversations with her are also likely to be varied and colorful, perhaps exploring the roots of the issue discussed, so as to reach a deeper understanding, and a colorful expression. An intelligent woman will find the way to convey a message, and explain a subject matter without the need to feel less intelligent or less educated. It’s only the weak who prey on the weak.

The fact that she’s intelligent
does not make her a threat.

She is a human being. She has a heart and a soul, like everyone else. It makes her sensitive to certain triggers and situations, as it happens with every individual. What she wants more than anything is love. Intelligence does not make her an exception. Intelligence makes a woman more perceptive. This only would represent a problem when a man’s intentions are not good. If a man is hiding secrets or leading a life that forces him to hide information from others, intelligence does not make any difference. Women always know.

Intelligence might be an intrinsic part of her, but that’s not all there is to her. She has other parts, and it is for a man to find out and unveil the mystery of her soul.

If she’s successful, she will use her resources to encourage, help and support a man to reach success. In this sense, women are more generous and do not fear competition as much as we men do. There could be, of course, exceptional cases in a professional environment in which a woman has to compete with men and other women. Such is society these days, but this fact cannot and shouldn’t be used against her. We use what we have, to get what we want and need.

Women make sacrifices, men do not know of.

In a relationship, all these qualities can contribute to improve it, as communication with an intelligent woman tends to flow towards openness. Like everyone else, she will have her most beautiful place within, her sensitivities and anxieties, but overall, she will use her abilities to make it grow. Women have not been educated to be above men, therefore, she will be willing to help a man to expand and grow in every aspect that is required.

Intelligence is a tool of service, to the self first, then to others. At some point the nurturing part will open and you’ll feel embraced.

It is important for a man to consider that meeting or interacting with an intelligent woman is not a contest. Challenging old beliefs and shifting our perception about what we have been told and taught to be can only open to possibilities of integration, love, equality and unity. The role of men and the divine masculine is to support the balance of energies, so as to allow the divine feminine to emerge towards the creation of the new earth. Some women would be more intelligent, some would be less. On this they’re not different than men.

Perhaps the essential part to realize is that intelligence, like every other aspect of the human condition is something that we have to transcend. We’re all too serious about life. We’re nothing but children playing adulthood and growing deeper frowns and frustrations because we don’t understand it and don’t know how to play the game. An intelligent woman would know how to do that. She also has her flaws, and she knows about it.

Maybe fear presents itself in these situations because a man feels that he won’t be able to overpower such woman, as tradition dictates. We men seriously have to question the values and beliefs that have been imposed on us, and allow the natural abilities in others to flow, so as to create a new world. We all play a different part, and only together we will get to a stage in which we’re all thrive in peace and love.

An interaction with a strong and intelligent woman is an excellent opportunity for a man to explore his vulnerabilities, feelings and emotions. This is something that we have been trained to avoid and which is essential for a man to work on, if he ever wants to find inner peace. We don’t always have to be strong. Once feelings are allowed to flow, a woman is more receptive. At this point, intelligence will play its part in putting together all the necessary tools for understanding, nurturing and healing.

Intelligence is not an attribute exclusive to men.

And if there’s anything men fear, this is women altogether. Intelligence is only a trait, but one that allows a man to test his own limitations, to engage in a process of learning and to grow personally. The first day at school we didn’t know what we know now. This is the same.

Intelligent or not, the way to reach a woman is through her heart and her soul. And maybe, only maybe, perhaps we’re afraid of showing ours. Think about that.

It’s interesting that most women fear men due to rape, violence or death, and that we allow ourselves to be intimidated by an IQ number. It really is time that we men begin to reconsider what we think we know. Let’s give ourselves a break. We don’t have to know everything. 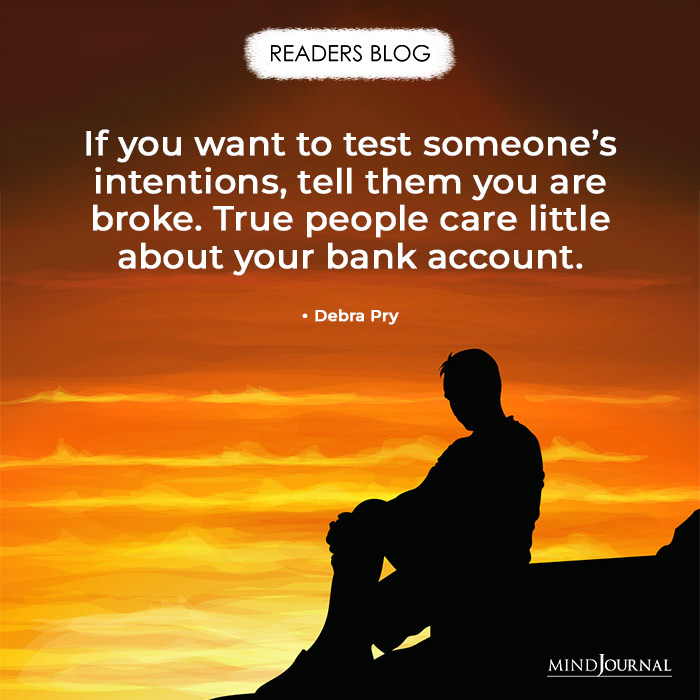 I am not going to make you any promises

Pay Attention, you will find all the words you want to hear. 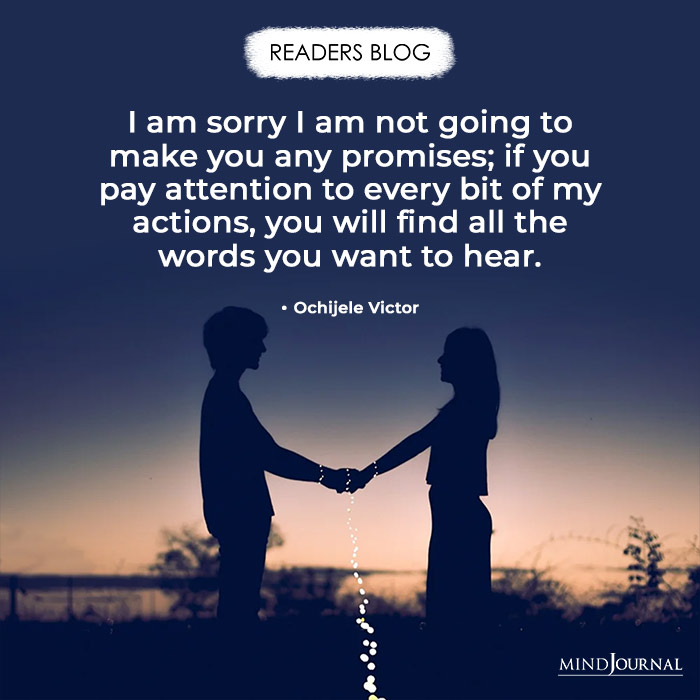 If you want to test someone’s intentions 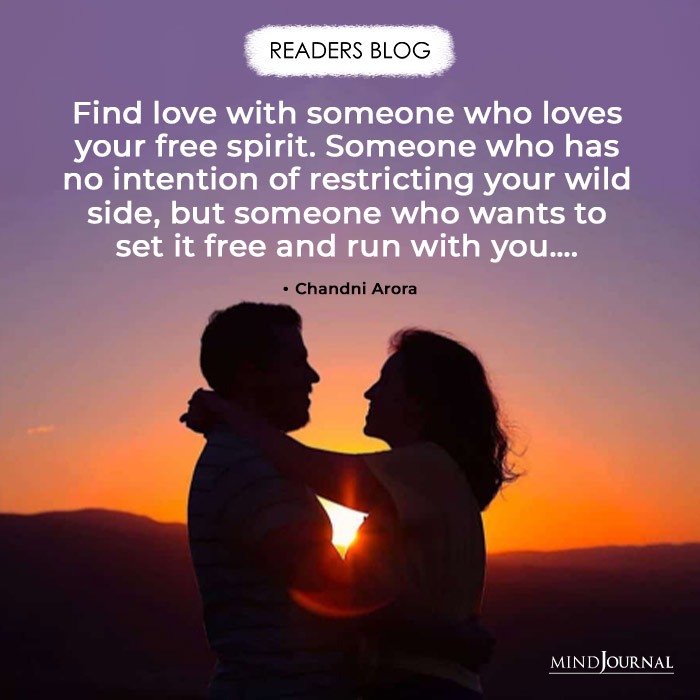 Find Love with someone

Someone who has no intention of restricting your wild side. 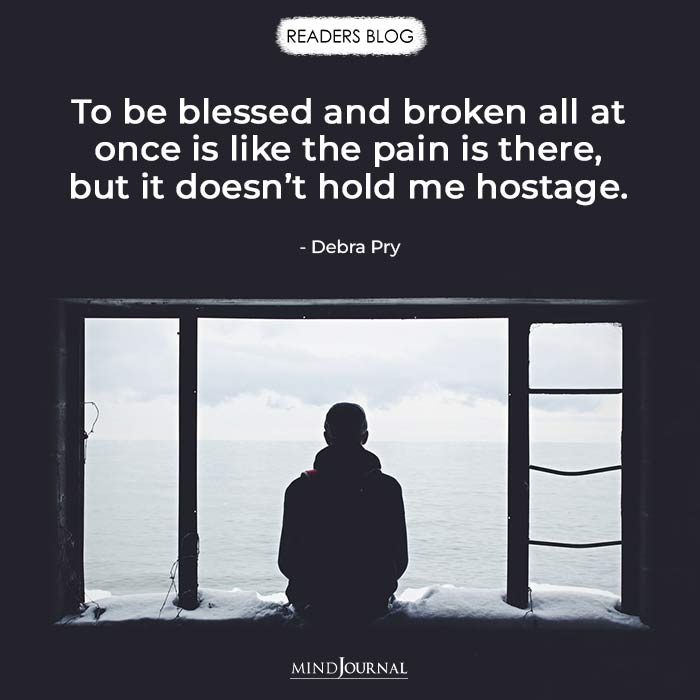 To be blessed and broken

It’s like the pain is there, but it doesn’t hold me hostage. 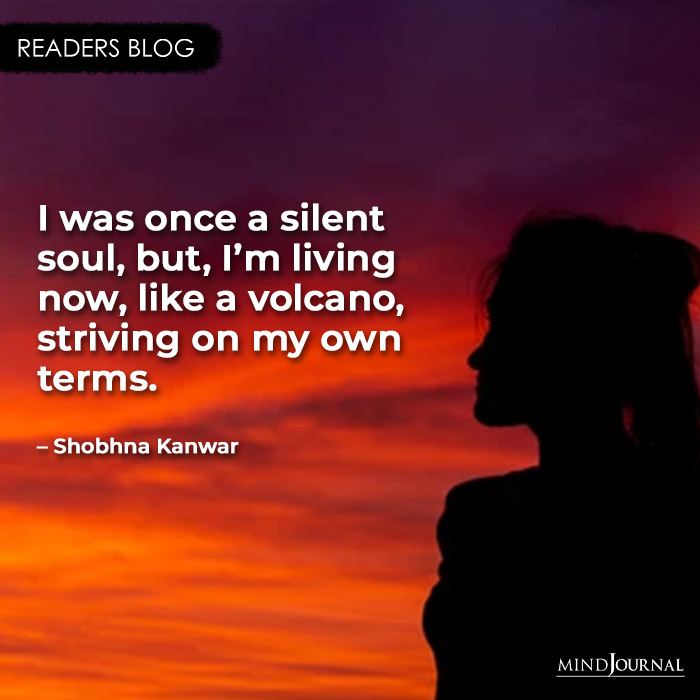