15 Things People Who Love Their Lives Do Differently 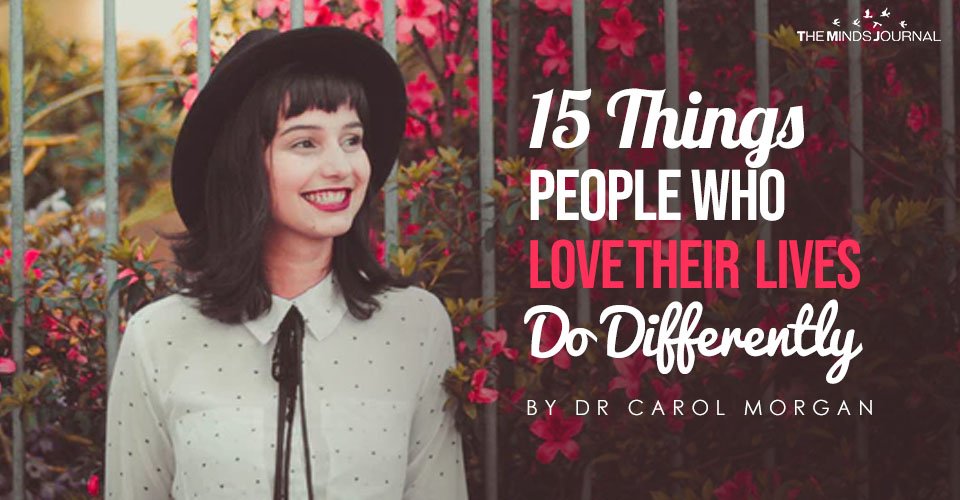 I think pretty much everyone’s ultimate goal is to be happy and love their lives. But how many people really do?

If you ever come across the lucky few who genuinely do love the life they are living, you might think, “What are they doing differently?”

If that thought has ever crossed your mind.

Here are 15 things that these people do, that you can too…once you make the decision:

1. They know that life is short.

It might sound cliche, but people who love their lives know that every moment is a precious gift.

They frequently have their mortality on their minds, not in an obsessive way, but in a way that reminds them to live each day to the fullest and not take a single thing for granted.

2. They aren’t demanding of other people’s attention.

If you’re happy and love the life you are living, there is no need to be the constant center of attention.

People who love their lives tend to be self-confident, and they don’t need everyone falling at their feet to feel good about themselves.

Read 21 Things That Change When You Start Respecting Yourself

3. They are wise with where they spend their money.

Happy people who love their lives realize that being impulsive or careless with their money will have negative consequences.

They think before they spend. They budget and make sure that they never go into debt because that would cause unneeded stress.

4. They are in touch with their feelings.

Part what is so great about life is loving other people and feeling our emotions deeply.

While they can’t guarantee that their emotions will always be good, people who love their lives allow themselves to feel and express emotions. They realize that feelings are part of life and they don’t repress them.

5. They claim their own power.

They change what they can, accept what they can’t, and let the negative emotions flow through them so they don’t let other people control how they feel.

6. They roll with the punches.

Life never goes the way we expect. People who love their lives know this.

They know that the unexpected can happen, but they don’t let it stop them from being happy. They simply shift gears and find another direction.

7. They know how to control their actions.

Some people think their actions are a result of some outside force. How many times have you heard, “She made me yell because she said something stupid!”

No. No one makes you yell but you. Yes, people can make you angry, but what you do with that anger–and how you channel it into action–is another story. People who love their lives know this.

8. They take responsibility for their actions.

No one is perfect. As I said in #7, happy people know that they control their actions. However, sometimes they make mistakes.

If they ever temporarily lose control and behave in a manner that may have hurt someone (or isn’t productive), they apologize. After they apologize, they change their behavior.

9. They turn their passion into a career.

You have probably heard people say, “Do you what you love and you’ll never work a day in your life.” Many people agree, but they don’t know how to make it happen.

People who love their lives know that there is a way to turn any passion into a money-making opportunity.

10. They know they have the ability to control their thoughts.

Most people think that their thoughts control them, instead of vice versa. That isn’t true. At any time, you have the ability to choose a different thought.

You might not believe it at first, but the more you replay a positive thought over and over in your head, the more you will start to live it.

11. They only associate with positive people who lift them higher.

Happy people don’t like to be around negative people. They get drained, and would probably rather be home reading a good book alone than be around any negativity.

No one likes complainers, so people who love their lives only surround themselves with other positive people.

Read 10 Ways To Deal With Toxic People Who Spread Negativity