How to Relieve the Burden of Survivor’s Guilt 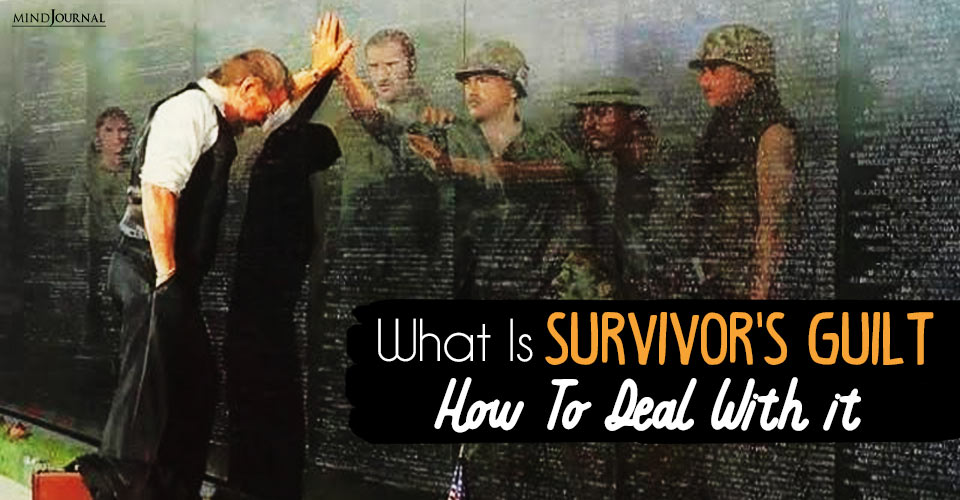 After surviving a tragic event, some people consider themselves fortunate while others are left with a sense of guilt. Learn about what is survivor’s guilt and how to deal with it.

What is Survivors Guilt?

Survivor’s guilt is something that people experience when they’ve survived a life-threatening situation and others might not have. It is commonly seen among Holocaust survivors, war veterans, lung-transplant recipients, airplane-crash survivors, and those who have lived through natural disasters such as earthquakes, fires, tornadoes, and floods.

In her Psychology Today blog, Nancy Sherman, Ph.D., describes the phenomenon by saying that survivor’s guilt begins with an endless loop of “counterfactual thoughts that you could have or should have done otherwise, though in fact you did nothing wrong.” The symptoms of survivor’s guilt vary, but here are some possible clues that someone is experiencing it:

In truth, it’s not logical for someone to feel responsible for another person’s fate, but guilt is not something we necessarily have any control over. However, survivor’s guilt is a normal response to loss. Not everyone experiences this type of guilt, but it’s often a feeling that is difficult to shake. It’s been said that some people are more prone to it, such as those with a history of depression and low self-esteem.

Related: The Psychology of Guilt: How Guilt Changes The Way We Spend

There are also other factors that could predispose someone to survivor’s guilt. For example, Alan Siegel (2005) did research on the dreams of firestorm survivors, which offered revealing results. He found that those who were victims of childhood trauma were even more susceptible to dreams about death and that all healthy defenses are weakened by trauma.

Unresolved past losses often become emotional Achilles heels or vulnerable areas that affect a survivor’s ability to cope. Siegel suggested that for disaster survivors, remembering and exploring dreams can help individuals access and deal with unresolved issues. Recording dreams in a bedside journal is an excellent way to facilitate this process.

As a resident of Southern California who has been through two natural disasters in the past two months, I (as well as others in my community) am experiencing an intense sense of survivor’s guilt. Two different times, I had to evacuate to hotels—first for the fires and then for the mudslides—but luckily my home was unaffected by Mother Nature.

How to Help Someone With Survivor Guilt

I believe that when experiencing survivor’s guilt, it’s a good idea to simply acknowledge it and call it what it is because it doesn’t go away if one represses these feelings. It’s not about healing the guilt so much as it is about shifting one’s perspective, and the passage of time can help immensely. In his book Guilt, Shame, and Anxiety, Peter Breggin suggests that we try to remove ourselves from negative thoughts and feelings and replace them with common sense, rational views, and love.

Here are some coping tips if you or someone you know is experiencing survivor’s guilt:

Related: How To Escape The Guilt Trap: A 5-Step Guide

If you find this helpful and know someone who is coping with survivor guilt share it with them. Let us know your thoughts in the comment section below!

Diana Raab, Ph.D. is a memoirist, poet, essayist, blogger, and speaker. She presents workshops in writing for healing and transformation. She has a Ph.D. in Psychology with a concentration in Transpersonal Psychology with a research focus on the healing and transformative powers of memoir writing. Her educational background also includes health administration, nursing, and creative writing. Diana has been writing since an early age. As an only child of two immigrant parents, she spent a lot of time crafting letters and chronicling her life in a journal. As an advocate of personal writing, Diana facilitates workshops in writing for transformation and empowerment, focusing on journaling, poetry and memoir writing. She believes in the importance of writing to achieve wholeness and interconnectedness while encouraging the ability to unleash the true voice of the inner self.View Author posts