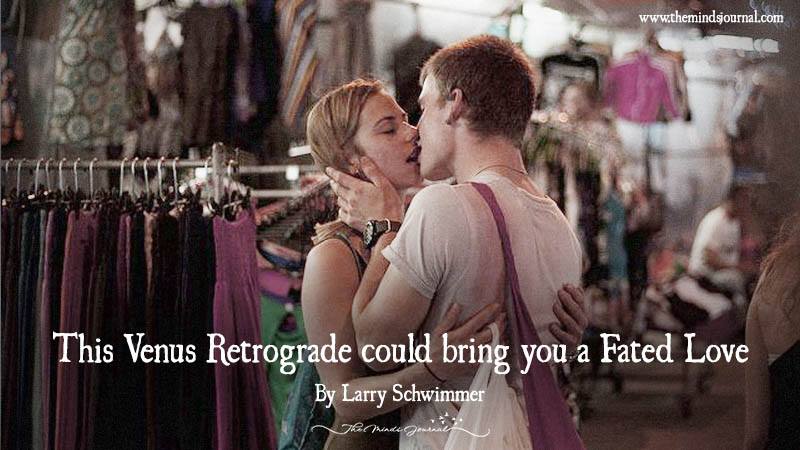 This Venus Retrograde Could Bring You A Fated Love

In Roman mythology, Venus is known as the goddess of love, romance, and beauty.

She is also known for her powers of seduction and feminine charms.

When Venus goes retrograde, as it will from March 6th to April 15th, 2017, it is not seen as a favorable time for initiating activities in the areas of life that Venus rules, because your perception is off-kilter. In the case of Venus retrograde, you should slow down and reassess what—and who—you value.

Unfortunately, you are likely to be tested during this time when it comes to matters of romance, especially if you are tempted to make any major changes in your love life.

Here’s how your love life may be affected:

An Old, Fated Relationship May Return To Your Life

A past love relationship may re-enter your life during the Venus retrograde. It may seem crazy, but it’s as if a sense of romantic nostalgia and longing seeps into your consciousness, bringing an old relationship back into your world. The purpose may be to reconnect you, or to give a final opportunity to get over it. This may be someone whom you saw as your soul mate.

This may be your chance to deal with any unfinished business in your old relationship, such as a former partner who cheated on you now returning to fess up to his or her infidelity. Perhaps, you may enjoy being with them one last time, or have a chance to finally complete your relationship and let go of it.

Unfortunately, love may not be better the second time around. So, if an old flame comes back into your life, be warned that it may not work out in the long-run. But if you’re not sure, wait until Venus goes direct to re-declare your love and make a new commitment.

This Is A Time To Evaluate Your Current Relationship

One of the problems you face during Venus retrograde is not being in touch with exactly what and who you value.

Use this time to get in touch with your own feelings about a relationship and whether it really satisfies your needs.

Take stock of the basic differences between you and the other person, so that you can determine if you can live with them. Ask yourself if you can compromise or make an adjustment so that your relationship can work more cohesively.

Relationships that have been especially challenging or problematic may come to an end during the retrograde.

If you’ve been in a long-term relationship, you’ll find yourself becoming more aware of relationship problems. If you’re in the early stages of a relationship, it’s important to realize that whatever dissatisfaction you’re experiencing will only get worse with time.

Remember, your perceptions may be skewed at this time. The person you’re dating now may appear more fabulous than they turn out to be. Consequently, starting a relationship during the retrograde may cause you to look back and ask yourself, “What was I thinking?” It’s easy to have a change of heart, no matter how infatuated you were with this person, during the retrograde period.

Whatever you do, don’t make any final evaluations about your relationship just yet! Wait until Venus goes direct, when you’re less likely to make a decision from an emotional perspective where your head is “in the clouds.”

Why? Because you’re not operating from a practical place of objectivity about your needs. Your heart is totally plugged into love, romance, and sensuality. As a result, you may be so attracted to someone that you cannot see how they can do any wrong. That’s why, if you’ve just met someone, you should just enjoy them without feeling a need to tell all your relatives and friends, “this is the one.” If you’ve been dating someone for a while, take a breath before you escalate your romantic commitment. If you’ve been in a serious relationship for some time, hold off a little longer to propose or take the next step.

Until you are sure about a new or old relationship, avoid making any emotion-based or hasty decisions to commit to or to end a relationship until Venus goes direct on April 15th.

The good news is that existing relationships aren’t adversely affected by the retrograde (as long as you don’t decide to get engaged or married). When Venus goes direct, you’ll retain the love and romance that was there, but you’ll have a greater sense of realism as to whether it’s truly a fulfilling relationship for you.

Perfectionism is just one of the many personality traits of Virgo, and there is so much more to learn when it comes to the sign of the Maiden.
Read more
Zodiac Signs 'N Secrets

Have you ever thought about what makes a Leo, well a Leo? The personality traits of a Leo makes them one of the most intriguing zodiac signs out there.
Read more
Zodiac Signs 'N Secrets

Not a lot of people acknowledge this, but there are many other personality traits of Cancer, that truly make them a unique zodiac sign.
Read more