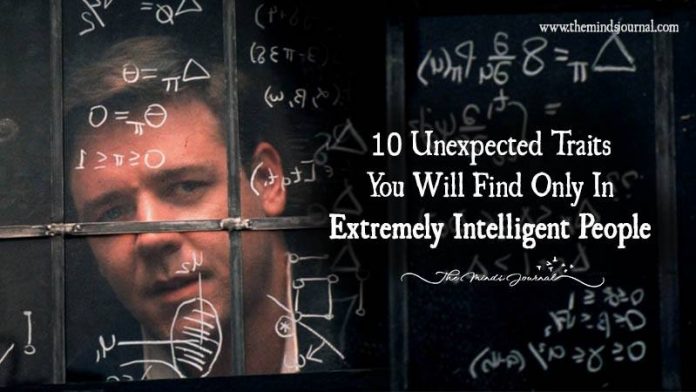 10 Unexpected Traits You Will Find Only In Extremely Intelligent People

Intelligence or smarts can manifest in many different ways. Sometimes it shows itself in seemingly totally spontaneous manners, things we don’t even connote with someone who is bright. Often those who are very proficient in one area of intelligence are a little lacking in others. A brilliant mathematician may lack an understanding of poetry or abstract art, while a leading physicist may be extremely socially challenged in a similar sense.

There are those lucky few however, that seem to somehow have tapped into many or all of the nuanced forms of intelligence and can function at a uniquely high level of ability in numerous opposing realms. These people tend to share common traits which others might not even consider connected to their intellectual talents. Listed below are 10 of these traits most commonly found among the subtly brilliant.

1. Fluidity Of Thought And Opinion.

These people know that to take a staunch position on something is to limit yourself to that position. While they are perfectly capable of forming strong opinions or beliefs, they prefer to stay away from rigid absolutes because they know that one must keep their mind open to new possibilities at all times.

They will always take as much time and energy as they need to deeply and genuinely consider what they want to say before they say it. They will take into account whether it is kind or socially acceptable, whether it is necessary or will add anything to the conversation, and whether or not they feel ready to confront the possible reactions to it. It may seem like a lot of work, but this is usually a momentary process in the head that takes only a few extra seconds of thought.

3. Never Contributing Unless It Will Benefit The Group.

Intelligent people don’t tend to be interested in small talk. They don’t speak or do things just for the attention or to fill the awkward silence and spaces. They will only become involved in a situation if they think they have something to bring to the table, something that will help or assist in a positive or necessary way. Otherwise they simply won’t interject.

4. They March To Their Own Drummer.

They aren’t worried about fitting in with the crowd because they know sometimes the crowd is boring or even downright wrong. They base their thoughts and opinions on information and fact because they are acutely aware of the great potential human beings have for making mistakes.

This doesn’t mean they won’t consider other people’s feelings on things, but they will always want to form their own individual ideas about it once they’ve obtained as much information as they can.

5. They Know That Everyone Is Capable Of Being Wrong. Including Themselves.

Only the fool believes that men are infallible. The truly intelligent person will always admit when they’re wrong or they’ve made a mistake. You don’t grow to be wise or well-educated if you can’t accept being incorrect. This also goes for those you might consider personal heroes. You can respect someone greatly for many things and still believe it when they screw up.

6. They Always Strive To Be Objective.

Instead of being emotional about it and telling a person they’re just wrong, someone who is very intelligent will instead offer a different perspective. It’s not about winning or losing the argument, it’s about helping the other person to understand things in a different, perhaps better or clearer way. The smart man/woman would rather help someone else come to their own conclusion than force personal opinions on them.

7. They Don’t Let Emotion Get The Best Of Them.

They will always do whatever they can to stay calm and clear-headed. When you allow your emotions and personal bias to inform your speech and behavior, people suffer. Communication just doesn’t happen the way it should and everyone ends up angry or upset. Staying relaxed, trying not to take anything personally and relying on facts and logic are the best way to find a good solution or compromise to any difficult situation.

8. They Often Rely On Intuition.

It may sound cliche, but sometimes the best thing you can do is trust your instincts. Intelligent people know that human beings once relied entirely on their gut for survival, and though we’ve long since evolved past that, our physical feelings can still give us some useful hints for life now. Never deny your instincts, they exist for a good reason.

9. They Are People Of Action, Not Just Words.

Too many of us will react to a troublesome issue by sitting around and trying to think our way out of it. While I’m not suggesting that we remove thought from the equation entirely, I am telling you that the truly intelligent know better than to get paralyzed in thought.

Do you know doctors have recognized more than 400 different phobias? Here is the list of Phobias that will leave you surprised.
Read more
wpDiscuz
16
0
Would love your thoughts, please comment.x
()
x
| Reply