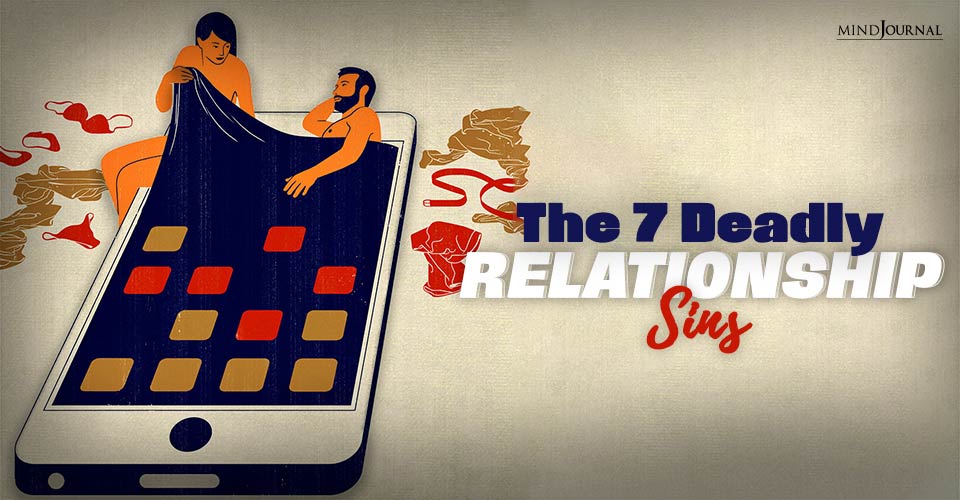 Every relationship goes through ups and downs, and it’s normal to have disagreements with your partner. But there are certain relationship mistakes that should be avoided at all costs, otherwise, your relationship will be over before you know it.

Not all flaws in a relationship are created equal – some things are easier to surmount than others. In fact, there are a handful of particular flaws – the Seven Deadly Sins of a Relationship – that are especially lethal.

The green-eyed monster is perhaps never more present than in a relationship. When you love someone, you want them to love you back and when you fear they don’t, envy rears its ugly head. Naturally, drama ensues.

If you are jealous of your boyfriend’s co-worker, you will do things like check his email or show up at his work under false pretenses (“I just wanted to bring by this pencil in case you run out!”).

In your mind, there’s nothing wrong with this. If you find proof that he and his coworker are flirting (or worse), your suspicions are validated. If you find no proof, your insecurity is lessened.

But he sees your actions very differently.

To him, your jealously is proof that you don’t trust him or respect his privacy. It also leaves him wondering when your paranoia will stop and assuming, probably quite accurately, that it won’t.

Related: 6 Mistakes That Can Kill A Great Relationship

A relationship is no place for judgment, and continually focusing on the flaws of another will leave them walking out the door rather than into your arms. This is true, even if your heart’s in the right place.

You may want to improve your boyfriend and mold him into the “perfect man”. But that’s not your job. Your job is to love him for who he is. Any attempt to change him will do much more harm than good.

He’ll wonder why this relationship is making him feel so bad like he’s not ever enough for you. He’ll wonder why you’re even with him. And he’ll wonder if there’s someone who will accept him, “bad” traits and all.

It’s pretty easy to tell whether or not you’re needy. Do you pout when your boyfriend goes out without you? Do you expect him to consistently put you before his career? Do you sulk when he disagrees with you?

Doing all of this – or any of it – will leave him thinking of you in terms of a child rather than a girlfriend. He’ll grow exhausted and frustrated until he decides he’s ready for a grown-up relationship and not a girlfriend who needs to be babysat.

Putting yourself first every once in a while isn’t a bad thing, but putting yourself first all of the time is extremely damaging. If you’re a “my way or the highway” sort; if you ignore your boyfriend’s interests; if you expect him to do you favors but never do them for him; if you’d rather gaze into a mirror than your partner’s eyes, then you have a problem.

Selfishness turns a relationship into a one-way street, which will only ever lead to a dead end.

Related: 8 Little Known Mistakes That Can Wreck Your Relationship

Perhaps the most deadly of all the sins, cheating on your boyfriend can take a variety of forms. It can range from actually sleeping with another, to simply flirting with someone (or even engaging in an emotional affair online). But all of it is damaging.

If your boyfriend finds out you’ve been unfaithful, he’ll label you as an untrustworthy, hurtful, potentially STD-ridden liar. He’ll also believe in the old adage – once a cheater, always a cheater.