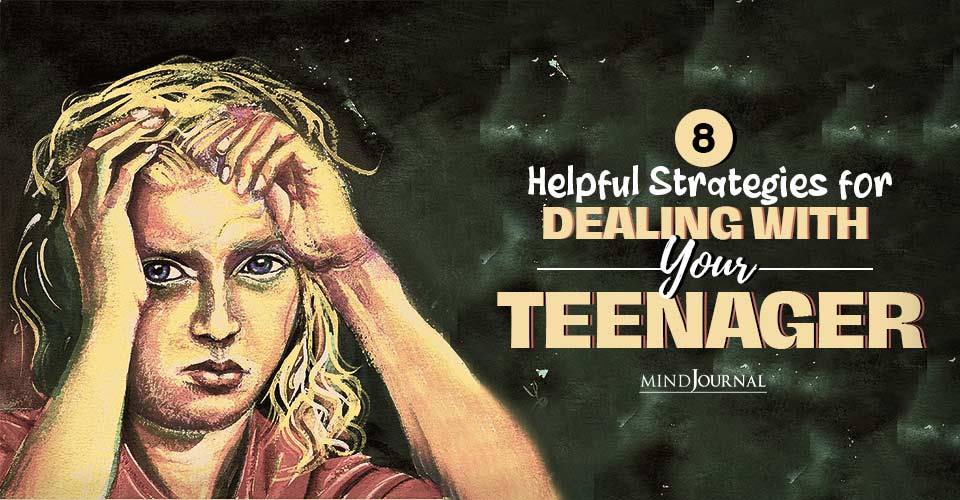 Parenting a teenager is never easy, but when your adolescent is defiant or distressed, it’s essential to understand what works and what doesn’t. Here are few strategies for dealing with your teenager.

It should come as no surprise that teenagers can present special challenges for parents. The central developmental task of adolescence is to move toward becoming independent while continuing to live at home. Separation-individuation requires teenagers to distance themselves from their parents psychologically in preparation to part from them physically.

This process can be extremely difficult to negotiate for teens as well as their parents. But with enhanced, conscious awareness and mindful action, both you and your kids can weather the storms of adolescence and come out of it without capsizing.

Here Are 8 Beneficial Strategies For Dealing With Your Teenager

Adolescents are supposed to be oppositional, rebellious, and moody, expressing dissent, disapproval, dissatisfaction, and resentment. Most parents naturally interpret this as disrespect and ingratitude, though that’s not necessarily the case at all. Teenage complaints are part of the process of separating and individuating. Just because your teenage kids complain frequently doesn’t mean they lack gratitude for what you have done and continue to do for them. Conscious awareness of this supports your capacity for distress tolerance, making the barrage of complaints more bearable.

2. Be Selective When Picking Your Battles

Be mindful in determining what to make an issue. When is it truly necessary, and when is it more about needing to be right or be in control? Make allowances for some oppositional attitudes and behaviors that assert independence. Conflict with your teenagers will find you; you don’t need to go looking for it.

Separation-individuation takes many forms that drive parents crazy but don’t have to, from the infamous adolescent eye roll, bottomless sighs, and sarcastic comments to the off-putting assortment of other nonverbal and semi-verbal responses when you ask questions or try to engage your teenagers in conversation, not to mention the rapid escape strategies they deploy to end their interactions with you ASAP. Mindfulness practices can help you become less reactive to these.

If you can give your teens the space to control most of their choices unrelated to safety and welfare, such as how they dress and other aspects of their appearance, it will serve your relationship with them well. You can let them know that you don’t especially like their choices, but they are their choices, and you respect them as such. This helps reduce the likelihood of power struggles in more pressing areas.

As research confirms, the human brain doesn’t fully develop until about the age of 25; therefore, your teenager’s brain is very much a work in progress. It’s natural to want to treat teenagers who are so close to chronological adulthood like they’re fully capable of logical reasoning, decision-making, and impulse control. But they just aren’t there yet.

Adolescents operate largely from the areas of the brain responsible for emotions. Those areas in charge of rational, longer-term thinking and awareness of potential consequences are still under construction. Instead of assuming they will act and think like adults, prepare yourself for the possibility of impulsive and seemingly irrational behavior from them.

Related: How To Respond To Your Children’s Disappointment: 7 Tips

4. Be Vigilant Without Becoming Peremptory

Separation-individuation includes a certain degree of secretiveness and dishonesty, and some experimentation with alcohol and other drugs is normal. Maintaining ongoing connection and dialogue with your children is vital during this phase of development. Be aware of significant changes in mood and behavior and become informed about those that correlate with problematic alcohol and other drug use, as well as mental health challenges, such as depression and anxiety.

Dan Mager, MSW is the author of Some Assembly Required: A Balanced Approach to Recovery from Addiction and Chronic Pain and Roots and Wings: Mindful Parenting in Recovery. He received his MSW from the Hunter College of the City University of New York, School of Social Work and is a Certified Diplomate in Clinical Hypnotherapy. He has been a psychotherapist, clinical supervisor, and clinical director, across a wide range of behavioral health and substance abuse treatment settings, including community-based outpatient services, residential treatment centers, and hospital-based programs.View Author posts