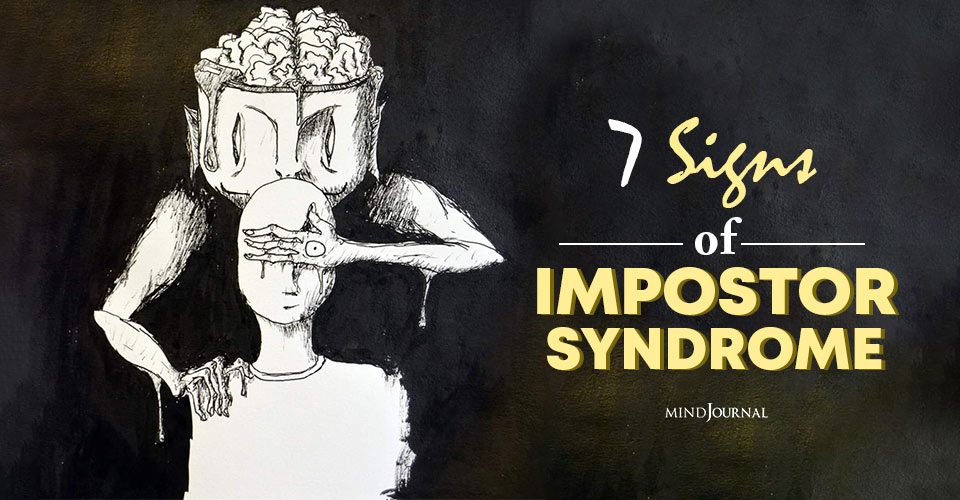 Have you ever had that sinking feeling that you just don’t belong? That you’re not as good at your job as others think you are? That it’s only a matter of time before you’re found out? What you may be experiencing is what’s come to be known as Impostor Syndrome. In this article, we’re going to explore seven signs of impostor syndrome.

By the way, you’ll want to stick around until the end, because the last sign of impostor syndrome I’m going to talk about… it’s a bit shocking.

1. Feeling You’re Not As Competent As Others Perceive You To Be.

This is the hallmark sign of impostor syndrome. And it doesn’t matter how good you are at what you do, no matter how much education and training you’ve amassed… that persistent feeling that YOU are the only one who knows how mediocre you are, and everyone else has it wrong.

It can really be a crippling feeling. And the longer it goes on, the worse it can get. Because after all, you’ve “fooled” them this long, and you’ve got to keep up the appearances, right? It’s tough, and that leads us into…

Let me be clear about something. A healthy level of self-doubt is a good thing. It’s a survival mechanism. If we were always fully confident and felt invincible, we’d probably think we could take that hot pan off the stove without a mitt, or step into oncoming traffic because we think we can get across in time.

But on the other end of the spectrum, crippling self-doubt stops us from being able to take action. When we question ourselves constantly, it can even show up in the form of procrastination where we put things off as long as possible. When our self-doubt goes on long enough, it can lead us to feel like we don’t belong amongst our peers.

This is a pretty common sign of impostor syndrome. Because the truth is, you’re good at what you do. Others see it. You might not want to admit it. And part of not admitting your skills and talents is pointing to external factors like… luck! “No, I’m not really good, I’ve just been lucky!” We’re sure our luck will run out, and people will find us out.

Another common sign of impostor syndrome here. When we do perform well, and when others give us praise… we can’t take a compliment. We can’t take the accolades. Why? Because it negates our view of ourselves that we’re incompetent.

So we reject the praise. We reject the compliments. It can be subtle though. Has anyone ever said anything nice to you about how well you did, and you said, “Oh thanks, but…” (pause) Right? When we use the word “but”, we’re basically telling the other person, “I acknowledge what you said, but you are so wrong, and you have no idea.”

By the way, if you relate to any of these signs of impostor syndrome, let me know in the comments below!

Related: 17 Signs You Are An Overachiever and How To Let Go

6. Fear Of Being Found Out.

If we don’t belong… if we’re not as good as others think we are… if we achieved our success because of good fortune… if we’re constantly having to overachieve to make up for our deficiencies… well then it’s only a matter of time before we’re found out.

This is one of the more crippling and painful signs of impostor syndrome because it’s almost like we’re constantly looking over our shoulders, metaphorically speaking. We’re waiting for that other shoe to drop. We don’t know when it’s going to come, but we are so convinced that it will. And yet, here you are, reading this article… and that day hasn’t come.

7. Setting Unrealistically High Goals… So You Can Fall Short.

And this one might just rock your world. This is self-sabotage at its finest. Have you ever told yourself, “I need to get all of this done by the end of the weekend,” just to find yourself unable to complete the work and get down on yourself?

This is an unconscious behavior that creeps its way into so many aspects of our lives. We overcommit, not only to others but to ourselves, so that we can prove to ourselves that we’re not enough.

Dr. Karthik Ramanan, NMD ("Dr. K") is a licensed Naturopathic Physician and your Emotional Health Mentor. Dr. K completed his undergraduate studies at Cornell University with dual bachelors degrees in Biological Sciences and Applied Economics and Management. He went on to work eight years on Wall Street, a period of time that spanned the recession of 2008 and the years after. After experiencing a life-changing 100 pound weight loss journey, he left his career and attended Southwest College of Naturopathic Medicine in Tempe, Arizona to become a naturopathic physician. Today, Dr. K is committed to helping other high-achieving entrepreneurs and professionals end burnout so that they can stop chasing joy and begin living in wonder.View Author posts