The Science Of Flirting: How To Decipher Subtle Signs of Flirting 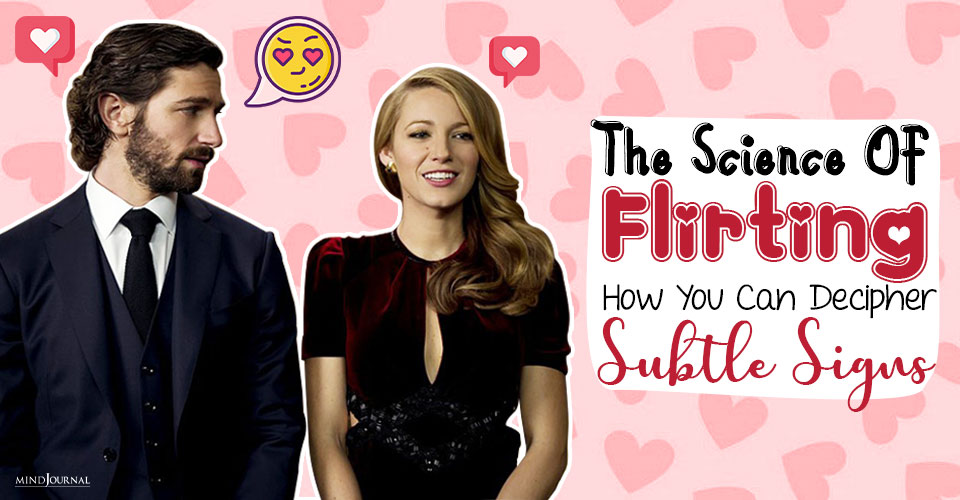 Are you not being able to understand whether someone is actually flirting with you or not? Flirting isn’t always straightforward, and can sometimes be confusing. It can be a sticky spot if you turn out to be wrong either way.

Have you ever wondered to yourself, “Was that person just flirting with me?” It could be a suggestive glance, a playful remark, an ambiguous emoji, or a simple text or DM. “Hi.” Oh geez, what does that mean?!

True, the line between friendly and more than friends can be difficult to discern. You want to get it right, to avoid potential embarrassment from misreading signals but also, more importantly, you don’t want to miss out on a great new relationship if someone really is interested.

Seeing What They Want to See

First off, it is important to realize that when men and women look at the same behavior, men are likely to see behaviors as more flirtatious and seductive.1 Whether it is wishful thinking on their part or a failure to properly identify cues, men seem to have a harder time knowing if a woman is actually flirting or merely being friendly. That isn’t a recipe for success.

But perhaps men’s misperceptions aren’t entirely their fault. After all, flirting is intentionally subtle and difficult to decode. Though that may seem counterproductive for relationship formation, it’s strategic.2 Often the person doing the flirting isn’t sure whether the person they like is interested or not. By cloaking their intentions with a bit of sly and subtle flirting, the flirter can “test the waters” without being too vulnerable.

Related: 8 Signs He’s Flirting With You And NOT Just Being Nice

That’s what makes reading the signals so hard. In fact, when Jeffrey Hall and colleagues at the University of Kansas looked at how accurately people perceive flirting by having over 100 heterosexual strangers engage in conversation with another participant.3

Afterward, the researchers asked each person if they flirted during their interaction and whether they thought their partner flirted with them.

Participants accurately detected flirting only 28% of the time. A follow-up study found that outside observers who were not in the actual interaction were even less accurate. The observers’ objectivity didn’t help and only made things worse. That’s a little reassuring. It’s not like outsiders have some grand insight that you don’t have. It’s just confusing.

If you want your flirtation detection meter to do better than 28% accuracy, the research could help. To determine what people do to show romantic interest in others, a researcher had two opposite-sex strangers meet and videotaped their interaction for 10 minutes.4 Afterward, the researcher asked each person about their romantic interest and matched it up with their behaviors during the interaction.

The focus was on laughter, but the amount of laughter itself did not indicate romantic interest. However, during laughter, males who were more interested gave off more dominance signals, e.g., taking up space, while “females communicated interest via numerous signals of bodily self-presentation and submission,” and in both, “a lack of interest was communicated through closed postures.”

A similar study gave participants the opportunity to flirt, videotaped it, and then asked participants to indicate whether certain behaviors were indeed flirting.5 Early in the interaction, behaviors weren’t related to actual interest. This suggests that the initial glances you exchange with someone probably do not hold much meaning. It’s too early to know anything for sure.