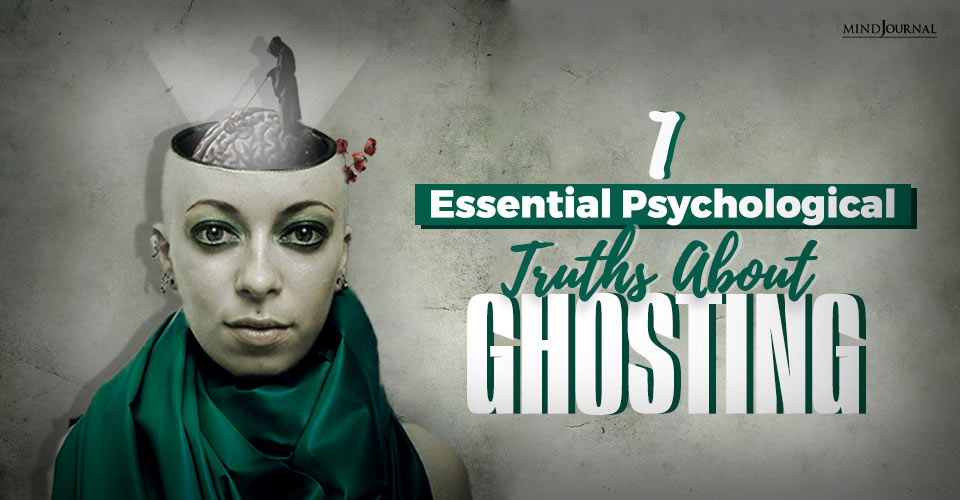 When you are in a relationship and suddenly the other person cuts off all communication with you, without any warning or explanation, and simply disappears, chances are you’ve been ghosted. There are many psychological truths about ghosting and why someone ghosts. Let’s talk about it.

Why “Ghosting” Hurts So Much, Why People Do It, And How You Can Get Over It.

“Ghosting,” which has been in the common parlance for the past five or six years, was once known as the “slow fade.” It blew up in the popular press (including the New York Times) around mid-2015. For those who’ve never heard it before — and I can’t imagine there are many who haven’t — it means suddenly discontinuing all contact with another person to end a relationship.

Ghosting can be failing to respond to a text exchange with someone you’ve never met, cutting off contact with someone you’ve dated a few times, or even refusing to return someone’s calls after a sexual involvement. If you’re dating, it can happen to you at any time, no matter how much investment you’ve placed in a potential partner.

A patient of mine, for instance, makes ghosting a regular practice, saying she just loses interest in the people she dates after they’ve had sex. To her, “ghosting” is a practical response to this problem. She has no other personal or professional overlap with the people she dates, and their friends don’t know hers, so when she stops responding to their texts, she knows there will be no consequences.

Although my patient does feel guilty, she doesn’t see it as morally wrong, and she definitely doesn’t want the alternative — struggling through so many messy conversations! To my patient, ending communication suddenly is actually an elegant solution: The people she’s been dating can infer from her lack of contact that she’s no longer interested.

Her reasoning may strike many of today’s young adults as familiar. It’s altogether too easy to stop chatting with someone who can only contact you through your cell phone, which you can quickly set to ignore. And it’s just as easy to meet someone new:

There are hundreds of dating apps currently available — thousands, perhaps, if you count the small ones. With so many apps, each subscriber can find hundreds of people to date at any moment, so it might seem like a waste of time to treat each person with full politeness and courtesy.

Online dating is fast-paced; if one option isn’t an immediate hit, you can move on to another immediately. Perhaps ghosts see the people they meet on the apps as if they’re walking profiles, something they can just swipe away if it’s not quite right.

Of course, if you’re always looking around for someone just a little better than the person you’re chatting with on Hinge, it’s a good bet that that person is doing the same to you — which could further reduce your likelihood of making a real investment of time or energy.

It also takes courage to admit when we’re wrong, or when we’ve knowingly hurt someone.

Ghosting Is Sometimes Referred To As A Form Of Cowardice:

It is the refusal to acknowledge one’s own misconduct. And cognitive dissonance may play a role as well.

Our brains naturally focus on information that confirms a preexisting belief about something, even when other evidence indicates that we might be wrong. Ghosts, like my patient, often go through elaborate cognitive gymnastics to convince themselves that what they do is totally fine.

In addition, ghosting can also be the result of a particular set of beliefs about dating. Some people think of it as a way of finding the person they’re destined to spend their lives with and see their dating life as a targeted search for the ideal partner.

These people don’t believe it’s possible for relationships to grow and change, or for attraction to deepen as time goes by; they do not have a growth mindset about romance.

People who see dating this way are more likely to ghost when they decide that the person they’re dating is not 100 percent right for them. (According to the New York Times, the opposite is true as well: People who believe that attraction can grow and change in good ways, and who don’t hold their dates up to a hypothetical ideal, are less likely to abruptly disappear on their partners.)

When the person you like stops returning your texts, the emotional consequences can run from unpleasant to severe. There’s a profound lack of closure to the relationship, an ambiguity that makes it impossible to interpret what went wrong.

Related: When A Guy Suddenly Goes Silent On You: This Is What You Should Do

The social cues present in a traditional breakup — reduction of time spent together, lack of eye contact, a change in the tone of interaction — are disorientingly absent. You may think your partner has begun dating someone else — or, worse, that they’ve finally recognized the things you hate about yourself.

Ghosting Causes You To Question Yourself, Which Can Be Devastating To Your Self-Esteem.

It deprives you of any chance to work through what went wrong in the relationship. In other words, it’s altogether too easy to draw troubling conclusions when you’ve been ghosted. Some even see it as similar to the silent treatment, which has been described as a form of emotional cruelty.

Ghosting is even more hurtful to people who have low self-esteem in the first place. If what one person believed was a substantial relationship ends suddenly — without even the effort it would take to have a traditional breakup — the results can even produce a traumatic reaction.

In psychological studies, social rejection has even been found to activate the same neurological pathways as physical pain. People with low self-esteem also tend to release less internally generated opioids into the brain after rejection, as compared to those with higher self-esteem. In other words, low self-esteem means less ability to tolerate the pain of being forsaken or abandoned.

So ghosting is, by and large, not a great way to treat people you respect. It’s passive-aggressive, it’s self-protective at the expense of other people’s feelings, and it’s hard to stop: People who are ghosted become more likely to do the same to someone else.

If you don’t like the experience, perhaps you should try to counter this trend and work against a disposable, low-investment dating culture. There’s nothing easy about explaining to someone why you aren’t interested in them romantically, but even a brief explanation is much, much better than none at all.

Closing a relationship openly is good for you, too: Disclosing your feelings can lower your blood pressure and reduce your subjective experience of stress. “I had a fun time,” you might say, “but I don’t think this is going to go in a romantic direction for me.” Or “I don’t think we’re really right for each other, although it’s been good to get to know you this week.”

Even that much can help the other person close your chapter and move on. (Be careful about saying you’re sorry unless you believe you have done something wrong; otherwise, “sorry” strikes a false note, or may even prolong someone’s emotional connection with you.)

And if you are hurting from having been ghosted? Remember that the message you’ve received is more about the other person than it is about you. Someone who ghosts you is declaring that they aren’t ready to treat you like an adult or to be honest about their feelings in anything approaching a delicate situation.

It’s a clear sign that they are relying on primitive coping mechanisms — like avoidance and denial — and is not able to have a mature relationship with you at this time.

Related: When You’ve Been Ghosted: Four Ways To Deal With It

Don’t bother reaching out to them again once you’ve gotten this message, either; if you believe the anecdotal evidence, asking people why they’ve ghosted you may even cause them to ghost you again.

If your self-esteem has been damaged by the way someone else ended a relationship, don’t sacrifice any more of it by trying to communicate with someone who cannot do so in a mature way. You’ll do better to spend your time with courteous, kind people, and your ghost has just identified himself, or herself, as someone who is neither.

Hosie, R. (2018, August). I tracked down all the men who’ve ghosted me and this is what happened. Retrieved from https://www.independent.co.uk/life-style/love-sex/ghosting-men-tracked-down-messaged-what-happened-dating-trends-uk-a8393866.html

Samakow, J. (2017, December). Ghosting: The 21st-century dating problem everyone talks about, but no one knows how to deal with. Retrieved from https://www.huffpost.com/entry/ghosting-dating-_n_6028958

Vilhauer, J. (2015, November). This is why ghosting hurts so much. Retrieved from https://www.psychologytoday.com/us/blog/living-forward/201511/why-ghosting-hurts-so-much

Ghosting is a horrible, and demeaning method when it comes to breaking up with someone. This practice can severely hurt a person’s self-esteem and dignity. Hopefully, these psychological truths about ghosting can help you detect if and when it’s happening so that you can deal with the whole thing better.

If you want to know more about the psychological truths about ghosting, then check this video out below: