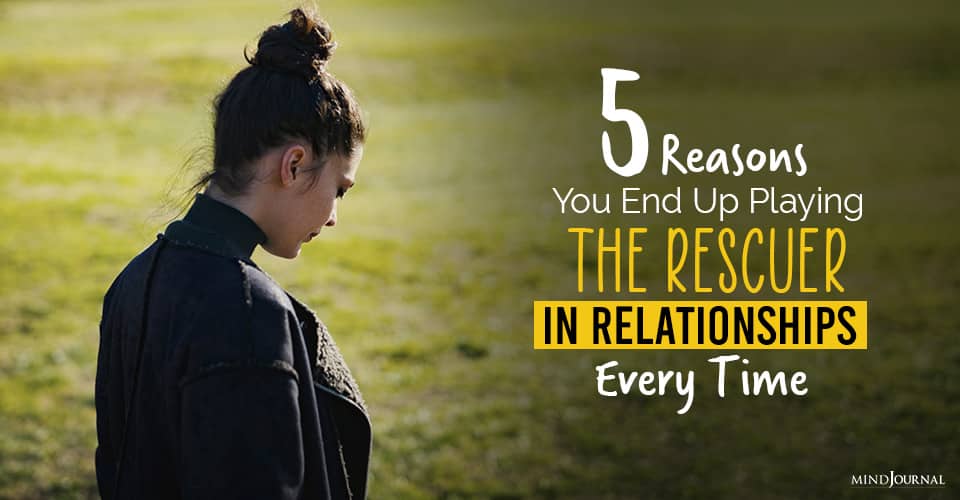 Are you always playing the role of a rescuer in relationships?

Willing to help others and motivate yourself to see the good in others cannot be a wrong thing? Right? But this compassionate gesture can be harmful to their welfare when others feel that they can manipulate you, especially to perform the role of a rescuer in relationships. Because you tend to gravitate towards helping your partner out, in whatever situation to the extent of making excuses for their toxic behavior.

If you’re an empathetic person, more often than not, you see the good in people. Although you’ve been burned before, you’re all too willing to put the past behind you because you think that people will either change or be different than the last relationship you were in.

While this is a good perspective to some extent, what often happens is that you end up playing the rescuer in relationships. Rather than leaving your partner to fend for himself/herself, you swoop in. You are the savior, the caretaker, the fixer.

You are empathetic, yes, but to a fault sometimes.

You don’t have to live this way, though. If you recognize the signs early, you can avoid becoming the one that’s doing all the work. Instead, you can fall for someone who’s willing to meet you halfway and be the one by your side, rather than the one you have to carry.

Read: The White Knight Syndrome: Understanding and Overcoming It

Here are 5 signs you’ll end up playing the rescuer in relationships (and how to stop this before it even starts):

One of the main reasons that you are a rescuer in relationships is that you have a ‘yes’ problem. Whenever someone asks you to do something, or something falls into your lap you jump at the opportunity.

Rather than weighing out if you even have the capacity to complete the task, or think through whether or not it’s feasible with your time and schedule, you’re already committing. And this causes people to rely on you more than they should.

Boundaries aren’t wrong. In fact, they’re healthy. And if you recognize that you haven’t really set clear ones, or are pushing the line to put someone else’s needs first, it’s a clear sign you’ll end up being the one carrying the weight.