10 Things People With Integrity Do Differently 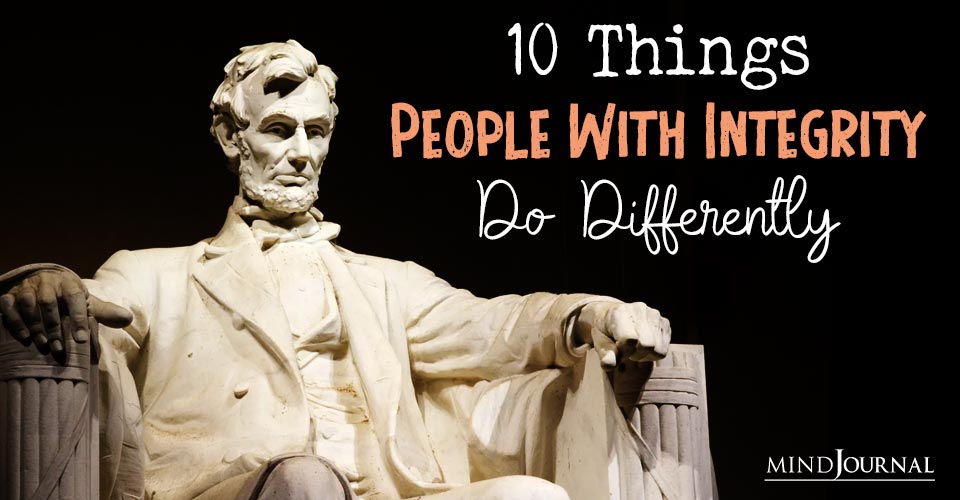 Have you ever noticed the unmistakable presence of people with integrity? It’s as if the air about them is inherently attractive and true. Take a look at the importance of integrity in life and the habits of such trustworthy people!

“I prefer to be true to myself, even at the hazard of incurring the ridicule of others, rather than to be false, and to incur my own abhorrence.”

What’s great is that you can achieve this same effect for yourself if you so desire to. Being a person of integrity isn’t easy, but it’s something that everyone should strive for. It requires honesty, sincerity, and a strong sense of self.

These people are the role models we look up to. They’re our most trusted companions, lovers, business partners, and good samaritans.

And they do things just a little differently than others.

10 Best Traits Of People With Integrity

1. If they give you their word, you can count on it.

Flakiness is often a trait that nobody desires. I used to be extremely flaky, always making plans just to break plans. But then I realized how that made me look.

People with integrity make sure others know that they stand by their word. If they make a promise, you can be sure that they will follow through.

Related: Why You Should Start Seeing Your Mistakes As Mirrors

2. They know what is right, and they’re not afraid to stand up for it.

People with integrity are a bully’s worst nightmare. They don’t put up with insults or degrading language and are known to stand up for people who can’t defend themselves.

Their moral compass is precise; they know what’s right and what is wrong, and have a deep conviction for balanced justice.

3. They live by the same standards that they expect from others.

One key part of evaluating ourselves is by measuring how much we practice that of which we preach. If we hold others to higher standards than we ourselves live up to, where is the fairness in that?

Judging others is easy. People with integrity aren’t interested in judging others, they’d rather raise them up, even if it means admitting their own flaws and imperfections. They’re trying to grow just like everyone else.

4. They take ownership of problems that aren’t their own.

Taking on the role of a leader isn’t usually something anyone wants to do. When you’re the leader, it means you’re responsible and accountable for what happens. Those with integrity know this and take on positions of leadership anyway.

Especially when it comes to problems that are not their own. For example, a person with integrity who’s hiking through the mountains might see a great deal of trash on the trail and decide to pack it out with them, even though the mess wasn’t theirs to begin with.

5. They choose to act sooner, not later.

If someone is in trouble or immediate danger, a person with integrity isn’t likely to wait around for someone else to take action. They’re the first ones to jump headfirst into dangerous circumstances if it means helping another person.

As NASA mechanical engineer Roger M. Boisjoly says, “If good and knowledgeable people observe wrongdoing and simply turn away to protect their own self-interests without attempting to correct the wrongdoing, they become part of the problem.”

6. They are extremely humble.

People with integrity are always very modest, no matter how talented or successful they might be. They do not believe in showing off to the world what they have, and would rather want their actions to speak for it.

Sometimes, they do not even realize that they are those rare people who actually live up to the society’s standards, and are truly some of the best human beings on the planet.

Related: Being Humble and Its Amazing Benefits

7. They believe in transparency.

Honesty and transparency are two things that people with integrity swear, and under no circumstances do they forget this. No matter how dicey or challenging the situation might be, they are always honest with themselves, and others.

They despise lying, and they always speak the truth, even if it’s the hardest thing they have to do. Deception, lying, betrayal – people with integrity never stand for these things.

8. They give credit where credit is due.

People with integrity never stoop as low as stealing someone else’s work or taking credit for something they did not do. They always make sure that the person responsible for the deed is given credit for their hard work, and talent.

Such people understand the value of diligence and hard work, and that is why they always give credit where credit is due.

9. They are people you can trust.

Another virtue of people with integrity is that they are extremely trustworthy people, who you can always count on. It is the integrity in them that prevents them from breaking someone’s trust or betraying them in any way.

They always respect people, just the way they want to be respected, and that is what makes them better than most people out there.

Related: Why You Should Understand and Trust Your Intuition

10. They are broad-minded people.

People with integrity are open-minded people who don’t stay in their own bubble, where they think that they are always right. In case they disagree with anyone, they do so in a civil manner, without making personal remarks, or being rude.

They know that there can be different perspectives on something, and sticking to only one is stupid, and unfair. Such people prefer to know and listen to all the opinions instead of just advocating their own.

In these days, people with integrity is genuinely hard to come by, and such values have become very rare. Lots of people claim that they have integrity, but the truth is they don’t. Having this virtue is vital to be not just a successful person, but a good human being too.

Related: How To Make People Trust You: One Simple Trick

If you want to know more about the habits of people with integrity, then check this video out below:

3 thoughts on “10 Things People With Integrity Do Differently”