Do You Need A Partner To Have A Happy Life? Research Attempts To Answer This 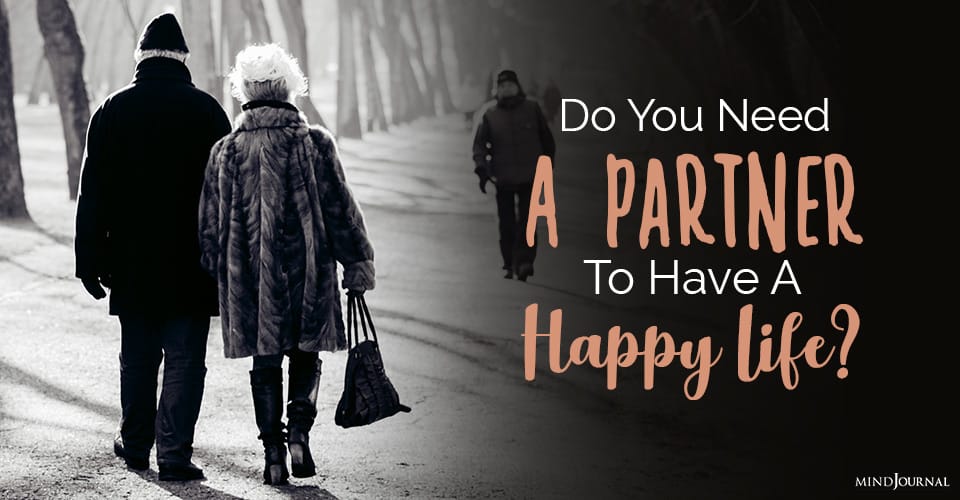 Having a partner in your life can definitely make you feel happier and more fulfilled. But is having a partner the only way to be happy and content in life?

Both men and women often lament their prospects for happiness if they don’t find a partner. I’ve heard this from those who seek to find the “right” person for a relationship that will last and bring joy to their lives, and from others who were in a relationship that ended and really long for another. They dread the prospect of “ending up alone.”

But what do we really know about how being with a partner relates to a happy life? New studies reveal information about that and point to what does support a “happy” life – more accurately described as one of mental and physical well-being; a sense of growth over time; and a feeling that it’s worth being alive, despite the ups and downs of life and the inevitable transitions and changes we experience.

Let’s look at some recent research into relationships and happiness. A study from Michigan State University assessed the happiness level of over 7000 people – those married, previously married, and those who remained single — from age 18 to 60. The researchers sought to find out, as in the classic Tina Turner song, “What’s love got to do with it?”

Related: Does Marriage Make a Person Happier In The Long Term?

The upshot of the study was that “…staking your happiness on being married isn’t a sure bet,” as co-author William Chopik reported. That is, the lifelong singles and those who had varied relationship histories didn’t differ in their level of happiness. Moreover, the lifelong married individuals showed only marginally higher levels of happiness. The research was published in the Journal of Positive Psychology.

What to make of this? The empirical data confirms the obvious: Lifelong happiness – a sense of well-being and fulfillment – is more rooted in your overall life, not just whether you’re in a relationship or not. And even for those in long-term “one marriage” relationships – which is less representative of current demographics – one always finds couples who stay married despite a sense of deadness, flatness, or outright anger toward each other.

Clinically, we often see this in the lives of couples who seek therapy. As Chopik pointed out, “People can certainly be in unhappy relationships, and single people derive enjoyment from all sorts of other parts of their lives. If the goal is to find happiness, it seems a little silly that people put so much stock in being partnered.”

No kidding: If you’re not living a life that generates happiness and fulfillment, to begin with, then being in a relationship in itself won’t change that. It could even make things worse.

So what does support well-being overall, through life? The answer is complex, and involves several dimensions, including how you think, feel and behave, and the societal context in which you live as well. The latter may condition you to believe in a particular definition of “happiness” that can undermine your health and well-being.

But a few dimensions that relate to how you live your life stand out. One example is cultivating positive emotions such as compassion and generosity. Another is serving something larger than just your own “needs” and ego. All are linked with increased well-being. More broadly, those reflect the link between happiness and a life that’s healthy — both mentally and physically.