Does Marriage Make You Happier In The Long Term? 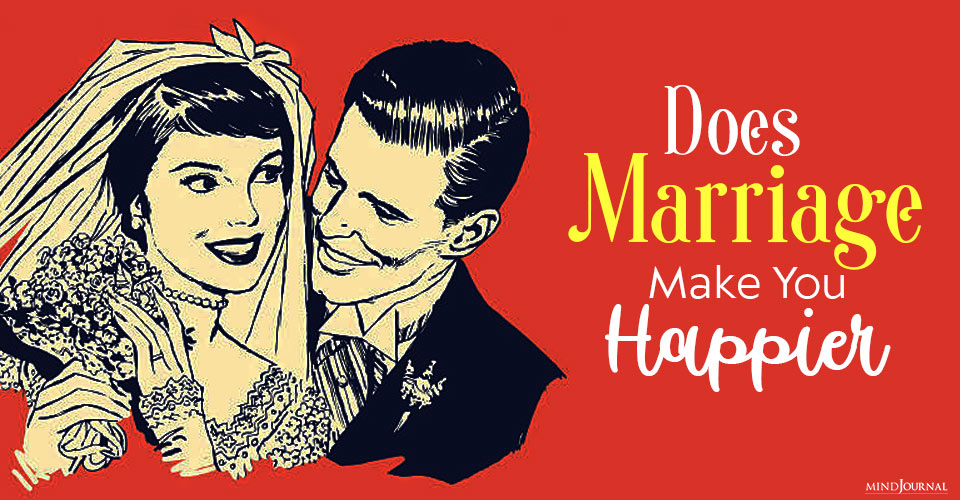 Does marriage make you happier? Or is it just a common societal misconception that has been ingrained into people?

Marriage has been woven into the fabric of society throughout much of history. The idea has been: Find your “soulmate,” marry that individual, and you will be infinitely happy. Numerous studies in the 20th and early 21st centuries have glorified and portrayed marriage as benevolent and beneficial to all, and have stigmatized what it means to be single.

Accordingly, the United States government has promulgated policies such as tax rebates and health benefits to encourage marriage. However, newer studies are proving that married people are not happier and healthier as was previously believed.

Does Marriage Make You Happier?

An award-winning study of more than 24,000 German adults found that people who got married tended to be a bit happier in the year of the wedding, but eventually their happiness returned to where it was prior. The authors call this phenomenon the “honeymoon” period, and state that “on average, people adapt quickly and completely to marriage.”

Read Does the Honeymoon Phase Have to End?

Another study, based on data from a national, 17-year, 5-wave panel sample, finds declines in happiness levels at all marital durations with no support for an upturn in marital happiness in later years. It is striking to see that this finding has a biological basis in the brain chemical phenylethylamine (or PEA), which is associated with feelings of well-being.

The researchers of the latter study argue that the decline in happiness (and frequency of sexual activity) may occur either because neurons become habituated to the effects of PEA or because of a decline in the levels of PEA over time.

Yet another study, using data from the 1984-2004 German Socio-Economic Panel, supports the conclusions of the previous research. In this study, the authors also find no evidence that children affect life satisfaction.

The authors state that the typical explanation for the benefits of marriage is the “social support” that people derive from their partners. There is a positive effect of companionship, emotional support, and sustained sexual intimacy. However, these benefits dwindle over time, people adapt to their presence, and perhaps most important, they cut ties with some of their other friends.

Even other studies that show a slight, lasting happiness advantage conferred by marriage admit that this uptick could be partly due to the selection effect—whereby happier people tend to marry, not that marriage brings happiness to individuals who were less happy, to begin with.

It is, therefore, possible that in the past, marriage led to increased levels of happiness and better health. But modern, sophisticated research is proving contrary. Society must catch up and begin to dissolve the generations-long misconception of marriage as a societal ideal.

Single people can and do live happy lives. And if you are seeking to live a fulfilling and happy life, thinking long-term shows that marriage should probably not be the most important criterion. Marriage is a beautiful institution, but it is not the be-all and end-all for finding happiness. Being single can also make you equally happy.

If you want to know more about whether marriage makes you happier or not, check out this video below:

Why are so many marriages unhappy?

The top reasons why most marriages are unhappy are: lack of communication, lack of attention, lack of intimacy, disrespect, and dishonesty.

Why do I feel lonely in my marriage?

There may be times when you can feel lonely. But loneliness in marriage occurs due to the lack of companionship in your marriage. There is an emotional gap that makes you unable to be yourself with your spouse.

What can destroy your marriage?

Elyakim Kislev received his Ph.D. in sociology from Columbia University and holds three master’s degrees in counseling, public policy, and sociology. He was awarded the U.S. Department of State Fulbright Fellowship and the Award for Outstanding Fulbright Scholars. Currently, Kislev is a faculty member in the School of Public Policy and Government at the Hebrew University. Kislev is the author of Happy Singlehood: The Rising Acceptance and Celebration of Solo Living, published by University of California Press, which was featured on newspapers, magazines, radio, and television, including BBC, Huffington Post, Bloomberg, Vice, Metro, Globe and Mail, New York Daily News, and many more. He published various academic articles on the subjects of singles and solo living, immigration, social and educational policy, ethnic minorities, and group therapy.View Author posts