The Meghan Markle Interview: Are We Still Not Ready To Talk About Mental Health? 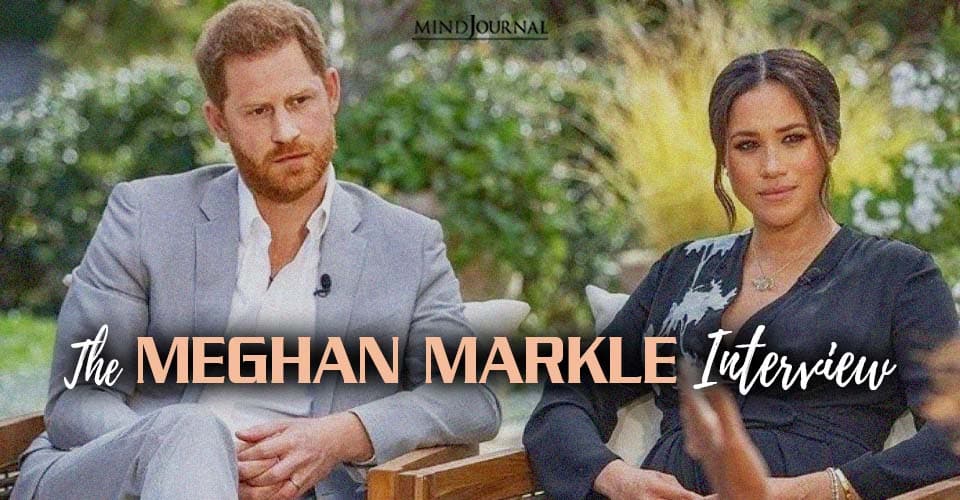 Trigger Warning: Suicide, mental illness, racism
Meghan Markle and Prince Harry’s interview has blown up on the internet, and it’s the only thing people are talking about these days. Naturally, people are divided over who is the culprit and who, the victim.

But no matter how controversial or juicy the details of Meghan Markle’s interview with Oprah might be, at the end of the day, people are ignoring probably the most crucial part of the interview: the conversation about mental health.

We might never know what the real truth is, and whether Meghan Markle is right, or the Royal Family. But what is shocking is that even in 2021, people are undermining the impact of mental health issues on a person’s psyche. As someone who has been living with Anxiety Disorder, and Obsessive-Compulsive Disorder (OCD) for the past 12 years, it’s heartbreaking to see people calling Meghan Markle ”attention-seeking” just because she chose to talk openly about her struggles.

It’s 2021, and many people still think that mental illness and mental health issues are myths. Well, guess what? It’s really not. And if more people don’t find it in themselves to treat people with empathy and kindness, then we are just going to go on losing people, just because nobody helped them when they reached out for help.

Mental health has still got a lot of stigma and negativity attached to it, even today. We have progressed a lot in society, but somehow most people are still very myopic and insensitive when it comes to dealing with mental health issues. So when Meghan Markle openly confessed that she felt suicidal when she was carrying her first son, Archie, people were quick to judge her and term her as ”attention-seeking”.

Well, first of all, that’s really, really messed up. When someone tells you that they have/had contemplated suicide, you never ever think of that as a cry for attention. Any person, be it a celebrity or a non-celebrity, having suicidal thoughts can take a toll on your psyche. And if someone tries to undermine that, it’s all the more difficult to handle it.

The stigma attached to mental health is the reason why so many people suffer in silence and feel scared of reaching out for help. They are scared of the judgment, ridicule, insensitivity, and most importantly, the criticism that comes with it. So many people have ultimately ended their lives because they could not turn to someone for support, that’s scary and heartbreaking.

Research has shown that when a celebrity comes out with their own mental health struggles, especially suicidal thoughts, crisis hotlines, and suicide prevention services have difficulty handling the hundreds of calls that come their way. Another research suggests that when celebrities open up about their mental health struggles, in a way, they sensitize and destigmatize the conversation surrounding mental health, encouraging more people to reach out for help.

Case in point: Years back, when Princess Diana disclosed that she suffers from bulimia, the number of people, especially women who started seeking treatment more than doubled, according to the British Journal of Psychiatry.

Many people tend to look up to celebrities, so when these celebrities openly talk about their struggles, it makes people relate to them more. It makes them feel as if they have some sort of connection with them, due to the same sort of struggles. It makes them seem more human.

If you look at some of the comments in response to Meghan Markle’s revelation that she felt suicidal while carrying Archie, you will see a horrifying amount of apathy, hatred, and negativity. And if that’s not disturbing, I don’t know what is. Here is someone who is saying that there was a time when she contemplated ending her life, and all people are doing is bashing her.

Can you imagine the degree of pain and helplessness someone feels on the inside, that they ultimately decide to end their own life? Think about it.

When it comes to suicide, people will judge and undermine suicidal thoughts, and might even term someone as a “loser” and “weak”. But if someone ultimately ends their life, those same people will say, “They should have reached out”, “I could have helped them if I had known”, and “They did not have to do this. We/I could have supported them through this”. Unfortunately, society and most people stigmatize mental health and suicidal thoughts but mourn suicide.