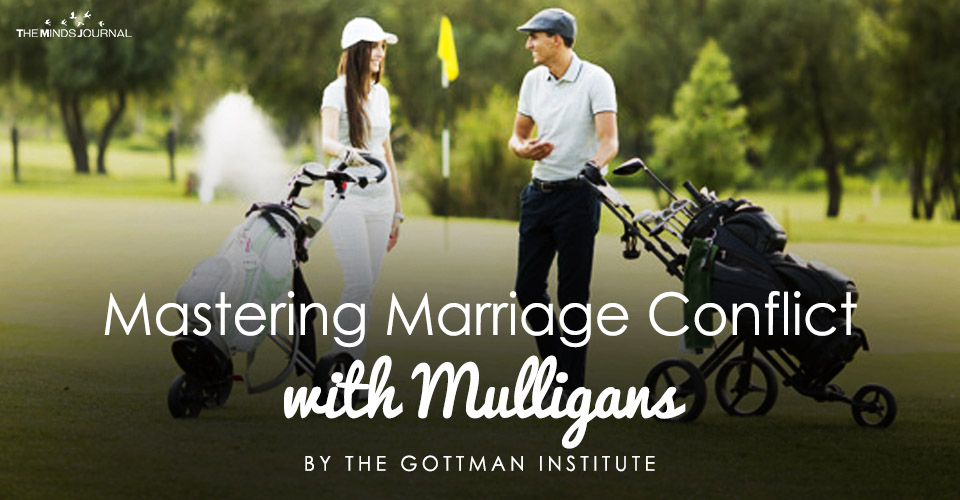 How to master marriage conflict with mulligans?

When a golfer hits a ball off the fairway, lands it in a sand trap, or sinks it in a water hazard, calling a mulligan allows the player to replay a bad stroke as if it hadn’t occurred.

With a second chance to get things right, the player attempts to avoid repeating the mistakes that caused their first stroke to get them in trouble.

Mulligans aren’t only for the fairway—they can also be useful in managing conflict in marriage.

Devon has the car warming up in the driveway. He calls to Becca from their home’s front door, “Becca, we need to go! We’re going to be late.”

He hears Becca call back from the bathroom, “We have plenty of time. I need to finish getting ready.”

Devon detects a tone of frustration in Becca’s voice but disregards it. He calls back, “If you had put your phone away and quit texting we would’ve been out of here 10 minutes ago.”

“Our daughter needed to know what our plans are for this weekend. Just cool off! We won’t miss anything,” she says, the tension rising in her voice.

A moment later, Becca stomps out of the bathroom, grabs her purse off the kitchen counter, and gives Devon a stern look. “I’m ready!”

Devon realizes he’s on the verge of igniting a fight. “I’m sorry,” he says. “You’re right. I need to take a mulligan. Can we start over?”

When couples face-off over issues on which they have differing opinions, the discussion can get derailed by what Dr. John Gottman calls a harsh start-up. A harsh start-up occurs when a discussion begins with criticism or contempt.

Devon’s comment to Becca that implied she was texting too much was criticism.

That was a harsh start-up. Devon would have stepped into the domain of contempt had he said something like, “You have no concept of time. You’d never arrive anywhere on time without me keeping you on track.”

Criticism and the sarcastic remarks that imply contempt trigger a chain reaction that often leads to a bitter end. A common reaction to a harsh start-up is to become defensive or stonewall.

Together, these four reactions to conflict represent what Dr. Gottman calls the Four Horsemen of the Apocalypse.

When one or more of the horsemen are on the field, couples become locked in fierce battles that drive the relationship toward catastrophe.

Becca’s initial defense against Devon’s criticism was light. She explained her reasons for texting and told Devon to “cool off,” hoping it would be enough to cause him to back off.

Her body language sent another signal that let him know he was stepping into a sand trap.

Devon did well to call a mulligan when he realized he had started off on the wrong foot. Calling a mulligan is one of many repair attempts that couples can use to stop the emotional landslide triggered by a harsh start-up.

In Dr. Gottman’s decades of observing couples in conflict, he and his team of researchers have discovered that successful marriages use repair attempts like golfers use mulligans.

A successful repair attempt enables a couple to start over or reset a discussion when one of the Four Horsemen introduces a negative tone to a conflict. The repair prevents negativity from spiraling out of control.

The success or failure of a couple’s repair attempts is one of the primary factors in whether [a] marriage is likely to flourish or flounder. Read How to Make Repair Attempts So Your Partner Feels Loved

If harsh start-ups too often spoil your efforts to talk through a sensitive subject with your partner, taking a mulligan and other repair attempts can be used like a secret weapon—not to take down your spouse, but to turn back the Four Horsemen.

According to Dr. Gottman, repair attempts are the secret weapon of emotionally intelligent couples.

Persons with high levels of emotional intelligence (EI) have developed their ability to perceive emotions in themselves and others.

They use this emotional awareness to enhance their thinking and reasoning. They are also effective in regulating their emotions. They use these skills to manage their relationships and advance their personal and professional growth.

Devon’s recognition of rising tension in Becca’s tone and body language in response to his criticism shows his EI in action.

A married man can improve his EI by accepting influence from his wife. Dr. Gottman’s research shows that in heterosexual relationships, men tend to need more help than women in this regard.

In his studies, only 35% of men are emotionally intelligent. Women tend to be better attuned to their emotions so husbands can learn from their wives how to better connect emotionally with their spouse, their children, and other people in their lives.

Dr. Gottman’s research has also discovered that the success of repair attempts is dependent on whether or not a couple’s marriage is bound together by a strong friendship.

The friendship between a husband and wife increases the frequency with which they detect each other’s repair attempts and use them to prevent negative interactions from overwhelming their marriage.

Love Maps create a strong foundation for friendship. Love Maps represent the deep knowledge that partners have of each other’s world including their likes, dislikes, hopes, and dreams.

Read The Love Map: Why You Choose Who You Love

Couples in successful marriages are constantly constructing Love Maps, cultivating and feeding their curiosity about their spouse by asking open-ended questions, listening intently to their spouse’s responses, observing their emotions, and paying attention to how they interact with the world.

Spouses who devote time and effort to building detailed Love Maps develop a consciousness of what repair attempts will and will not work to keep a conflict from falling into a vortex of swirling emotions, like the golfer who loses control of their game with a ball stuck in a sand trap, water hazard, or lost in the woods.

Couples can add useful repair attempts to their toolkit by using The Gottman Repair Checklist. Schedule at least 20 minutes to review the list together and identify which phrases will and will not work in your relationship.

As you identify phrases that work, compile your own list and add to it as you come up with original phrases of your own, like Devon and Becca’s “mulligan.”