Listen To What A Man Wants, But Give Him What He Needs: Here’s Why 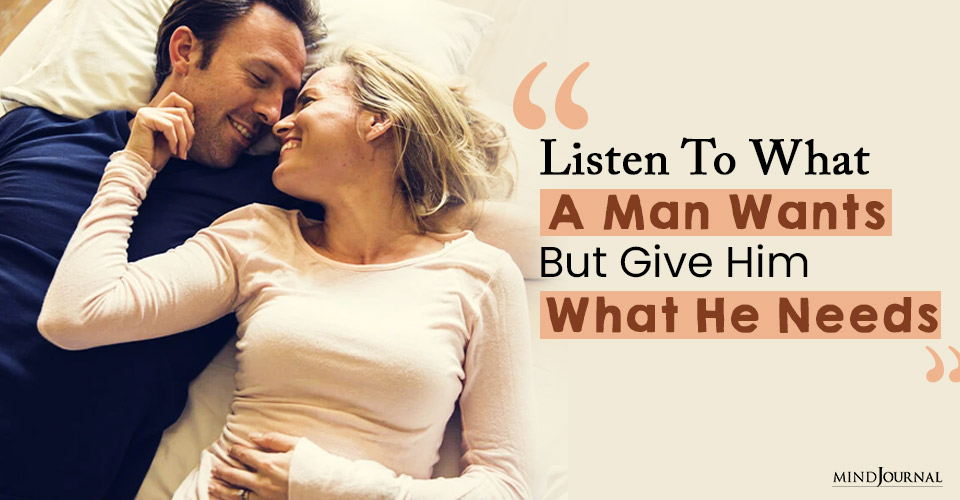 Sometimes, most women tend to get very confused about what a man wants, and what he needs. The interesting thing about this is that what a man wants isn’t always what he truly needs in his life and relationships.

He’s not lying when he says he likes these things and wants women to behave this way, However! All of these things that he wants so badly are just to stroke his ego. He won’t ever respect, love, or be with a woman who acts like this long-term. You’re probably guilty of a lot of these things yourself. How long did your relationship, last behaving this way with a man? Not long and if it did, you were probably taken for granted and unhappy during most of it.

Why is this? For example, I might want to eat junk food and a box of ice cream every day but will it fulfill my body’s needs? Will I feel good and be happy to continue to eat this way? No, you won’t in the long term especially. This is the same thing with men.

Stroking his ego may make him happy in the short term every now and then, but it won’t make him happy long term and eventually, it will make him lose attraction for you.

What Are His Needs?

Well, let’s look at the difference between men and women. Men have high levels of testosterone compared to women. So we have to treat them a bit differently from women. Having more testosterone means that he will be more likely to go for his goals and his dreams, pursuing hunting and chasing what he wants in life. How can you fulfill this need?

Easy – Become his goal. Become a challenge, the object of his attention and affection. Let him come to you, let him pursue you. Give him uncertainty instead of safety. He might say that he likes a woman who approaches him or who gives him safety and tries to impress and pursue him however this is not what he needs. Give him a mystery, let him figure you out, let him put the puzzle pieces together.

Don’t take that pleasure away from him by being an open book and yes, men do need a bit of caring too, which is why I said keep the caring as a treat only. Just don’t make his ego into the main meal.

Related: The Truth About How A Man Chooses The Woman He Wants To Marry

Fulfill his needs of uncertainty and mystery. Don’t be an open book and tell him everything that’s going on in your life and your innermost thoughts. Have a life outside of him, keep up with your friends and family and hobbies. A man may complain that you’re not like the other girls, but he will keep coming back to you, he will want you above the others and most of all he will respect you, and respect, as we all know, is what leads to love.

For a one-on-one session with Greta or Greta’s team please book here.

Greta Bereisaite is a dating and relationship coach, who has coached many women on how to be high-value individuals in dating & relationships. After her sister passed away from cancer, she set her priorities straight and focused on her dreams. She worked very hard, and now she is a successful entrepreneur who mentors women all over the world on how to face their fears and challenges and achieve their wildest dreams in life and relationships.View Author posts