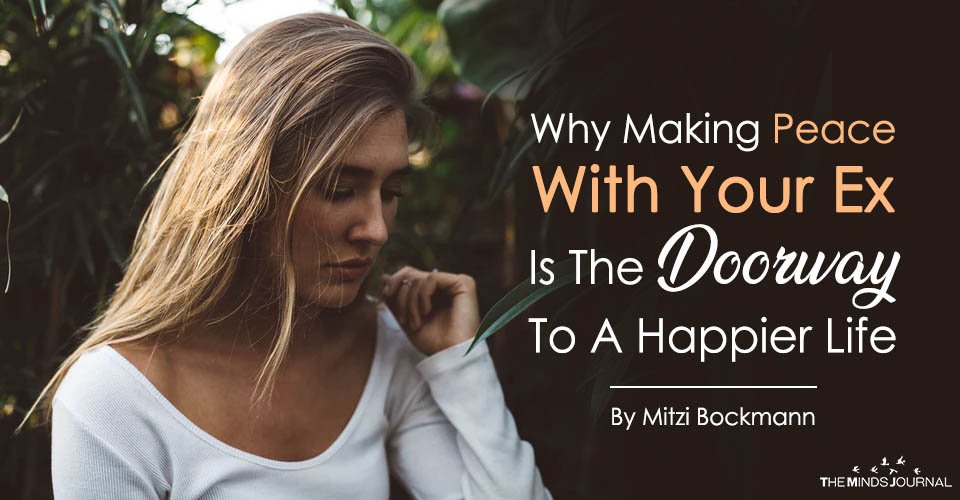 If you had told me a few years back that making peace with your ex was even possible I would have laughed in your face.

My husband left me six years ago for his college girlfriend. We had been married for 20 years and one day he decided that he was just done. Or, rather, that he had found a replacement.

Suddenly, I wasn’t a wife and my kids were off at school so I no longer felt like a mother. I felt like my life was over. I was devastated. And I was very, very angry.

It has taken me a long time to get past the anger I have felt for my ex but I can say that I am so very glad that I was able to do so. Because I was able to do it, my life has become much better place.

#1 – It improved my physical health.

One of the reasons that making peace with your ex is the way to a happier life is because when you can let go of a grudge you become a much healthier person.

People who hold on to grudges, who are chronically angry, are constantly in fight or flight mode. Fight or flight mode results in numerous functional bodily changes including increased heart rate and blood pressure and heightened immune response. Those changes, then, can increase the risk of depression, heart disease and diabetes, among other conditions.

For me, the anger I felt for my ex definitely made my depression worse. My stomach hurt all the time and I lost tons of weight because I wasn’t eating. I contracted Bell’s palsy, a condition that paralyzed the left side of my face. I stopped sleeping and moved around like a zombie.

When my physical conditions started getting so extreme I realized that it was time to let go of the anger. My mother was angry with my father, her ex-husband, for 30 years and she died very young of pancreatic cancer. I didn’t want to end up like her.

So, if you find that the anger you feel is interfering with your physical health, work on letting it go so that you can move on and get healthy.

#2 — It allowed me to feel better about myself.

When my husband left me for another woman, he left me feeling like I was the biggest loser in the world. If he didn’t want me, the person who said he would want me forever, then who would?

I would spend hours at a time obsessing about what he and his woman were doing. Little things would go wrong and I would scream and yell, much like a child would. Whenever my ex and his girlfriend spent time with my kids, I would get so angry and jealous that I would curl up into a little ball and cry.

For quite a while I stumbled around, trying to find my place in the world, being held back by the anger that I felt for him. I tried to build a life for myself and find a new job but I just couldn’t push past my depression and anger and make it happen.

It was only once I let go of my anger and worked on making peace with my ex that I was able to start feeling okay about myself again. I didn’t feel like such a loser. I was able to get off my butt, start a business, start eating well and making new friends. My self-esteem slowly rebuilt itself to where it is today, somewhat off the charts.

If you have children with your ex, making peace with him will be the biggest gift that you can give them.

When their parents split, the matter what age they are, children are confused, angry and hurt. I know that the anger that I felt for my kids’ father wasn’t healthy for any of us.

My son refused to talk about anything his father was doing and my daughter tended to over-share, somewhat perversely trying to make me feel better. Neither of those things were good for any of us, particularly for them.

I know that since I have made peace with their father, my kids are so much more willing to share with both of their parents their comings and goings. And this, more than anything, makes me happy.

Even if you don’t have kids, I can promise you that your friends will agree that making peace with your ex is a wonderful thing, if only so that they don’t have to listen to you talk about him anymore. They want to support you, always, but they most likely hate him and want him just to disappear.

#4 — It stopped me from obsessing about the past.

For many of us, we spend more time thinking about the past then we do thinking about our future. And constantly looking in the rearview mirror isn’t good for anybody.

We all live with regrets, with obsessions about what we did wrong, about the messes we made and the things we could have done differently. Spending so much time doing that takes us away from creating a new and better future for ourselves.

I am here to tell you that the past is in the past and there’s nothing we can do to change it. All we can do is to look at what we did, what we experienced, identify what we might have done differently and take that knowledge with us into the future. Being hard on ourselves for past behavior does us no good; it only makes us feel worse.

Read 13 Signs He Is Still Not Over His Ex

Once I started looking to the future, and not to the past, I was able to create a clear path for myself, a path that included the business that I wanted to build, the person who I wanted to be in the world and the love I wanted to find.