The 8 Stages Of Life According to Erikson 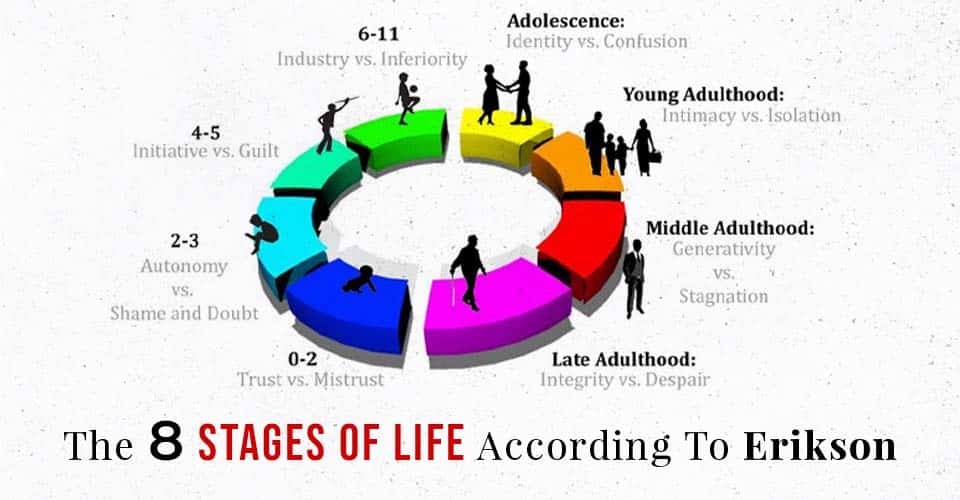 One of the most influential and popular theories of development was put forward by Erikson. He was an ego psychologist from the 20th century and is famous for his contributions in the fields of psychoanalysis and developmental psychology. He developed a theory to explain how individuals tend to mature in life.

Erikson’s theory was influenced by the works of another great psychologist known as Sigmund Freud. He based his work on Freud’s psychosexual theory and modified it. This gave rise to the eight stages of his Psychosocial theory that we now know today. He believed that our ego plays an important factor in our development. He believed that our ego contributed to our development in a positive way by mastering skills, ideas, and attitudes at each stage of our development in life. This mastery and retention of skills help children develop into mature and successful members who contribute to our society. He had a particular interest in how relationships and social interaction play an important role in the growth and development of us humans.

He believed that there was a presence of conflict during each stage. If an individual managed to successfully deal with it, he/she would develop psychological skills/strengths which would serve them well for the rest of their lives. If they failed to do so, they would not develop essential life skills. Erikson also believed that at each stage, a person would need to master those qualities which he often referred to as “ego-strength” or “ego-quality.” Thus, if an individual managed to master abilities at each stage, they would feel a “sense of accomplishment” and if they failed, they would emerge with a “sense of inadequacy.”

The 8 Stages Of Life According To Erikson

Erikson developed his theory based on Sigmund Freud’s psychosexual theory. He developed his own eight stages of a person’s development from infancy to mature adulthood. The stages are built on the effect social interaction has on people and the way they mature. His theory is considered to be an important part of the psychology of development. It elaborates on the various challenges a person faces during his/her development. Each stage has conflicts that the person needs to overcome. Also, an individual does not necessarily need to complete one stage to progress to the next. They will automatically progress to the next stage. However, if they do not overcome the conflicts, then the challenges will continue to affect their lives throughout all the stages until they finally resolve them.

The first stage of his theory begins when a person is born and continues till that person is 12 to 18 months old. This is one of the most fundamental stages in one’s life. In this stage, infants learn to trust adults. This happens when an adult fulfills an infant’s requirements for survival, like providing for food, care and shelter.

Trust: When a caregiver or an adult promptly responds to the infant’s cries, the infant can start trusting people around them. They can develop a sense of security and trust. This affects them in later stages when they learn to trust people.

Mistrust: When the adult tends to neglect the infant’s needs for survival or provides sporadic care, the infant will start growing insecure. They might start learning not to trust people or adults around them. They can carry this trait forward when as teenagers or adults, they tend to doubt people.

During this stage, infants grow up into young children. They start exploring their surroundings and learn more about the world they are in. They also start to develop basic life skills in this stage such as toilet training and speaking with clarity.

Autonomy: If in this stage, the caregiver or the parent makes them feel safe about their surroundings and allows them to explore, children will develop skills in risk-taking. They will feel confident about exploring new ideas, skills, locations, etc.

Doubt: If the caregiver fails to make the child feel protected and safe and also discourages them from taking risks, the child will grow up to be insecure. They will start doubting their abilities and will depend too much on the parent.

This stage allows young children to become independent and set goals for themselves. Erikson believes that at this stage children should learn to set their own goals and achieve them, while at the same time interacting with different people and also children their age.

Initiative: When parents and caregivers support children in being independent, learning to set goals, and accomplishing them, they grow into adults who are able to make decisions and abide by them in a mature way.

Guilt: When these same children get criticized for taking independent decisions and being assertive of situations, they might feel guilty for their actions or their desires. When a parent becomes controlling of their child’s decisions, the child may learn to follow someone else’s decisions or ideas, rather than being confident in their own.