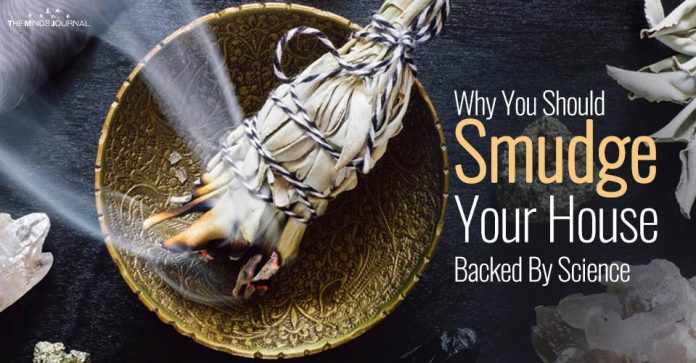 Why You Should Smudge Your House Backed By Science

Why You Should Smudge Your House Backed By Science

Smudging is an activity, that has roots in indigenous culture, and although considered dubious, and a waste of time by the present generation, has found shelter under science, which has brought forth evidence, that proves that it is actually a useful exercise to protect one’s household, from disaster.

It is performed by burning raisins, and other medicinal herbs, that, for a period of 24 hours, have said to destroy all negativity, and harmful bacteria (both spiritual, and scientific) as a domestic antiseptic, in the household that it is performed at. It isn’t an exercise in futility, and that comes with a stamp of trust.

Research published in the Journal of Ethnopharmacology entitled Medicinal Smokes testifies to that. The authors reported: “The most frequent medical indications for medicinal smoke are pulmonary (23.5%), neurological (21.8%) and dermatological (8.1%). A very large list of pathogenic bacteria was shown to be absent in an open room after a remarkable 30 days following treatment.” This lead to the authors to conclude that: “We have demonstrated that by using medicinal smoke it is possible to completely eliminate diverse plant and human pathogenic bacteria of the air within confined space.”

“Smudging is an ancient and sacred ceremony, so it is best to perform it with full awareness and in a slow, mindful manner. Even the happiest homes accumulate negative vibrations over time, so Fengshui practitioners find it helpful to smudge the home at least several times a year. Some people smudge as much as once a week. You can smudge your office space periodically (though preferably not during busy office hours), and you can also use smudging to clear your own bodily energy or the energy of other people.” (RodikaTchi)

Why You Should Smudge Your House?

It is common knowledge that the human body is filled with positive, and negative ions, that function together, for the body to survive. But, when we are overworked, or over a period of time, our body accumulates positive ions that are damaged, and rendered redundant, our energy gets blocked, and the negative ions trump the positive ions. This makes us sluggish, lethargic, and we wish for normalcy in our life.

Smudging our house helps us in this situation, for the smoke emanating from the burning of herbs, lead to the clearing of our damaged positive ions, and dispelling the negative ions and we are finally rid of the cobwebs in our head.

“The smoke that’s emitted from the herb bundle is believed to cleanse negative energy and purify living spaces, as well as people and even objects like tools, furniture, and home decor. Similar to one washing their hands before a meal, it helps to cleanse a person in an energetic bath of aromatic smoke.” (Susan Patterson)

It is believed that positive ions can build up tension, strife, and destruction wherever they settle, so it isn’t really the positivity you are thinking of.

The positive ions stick to the negative aspects of life, and the entire atmosphere, becomes congested to the extent, that living becomes tough. At this point, burning of sage, or herb, or any such substance, can lead to the negative ions releasing into the atmosphere, which stick to the positive ions, leading it to get heavy, and fall to the ground, hence dispelling the gloom, and doom surrounding the household.

“They fall to the floor, or attach to a nearby surface, removing them from the air you breathe while preventing them from causing health problems like respiratory issues.” (Susan Patterson)

Susan Patterson also remembers to note that the presence of our electronic gadgets, including computers, TVs, washing machines and the like, as well as carpet and upholstery, our household has become what some describe as “positive ion prisons.” That’s why negative ions that occur from smudging can be so beneficial in counteracting these effects.

Smudging your home, office, or even your body is kind of like taking an energetic shower, or perhaps even spending a day in the mountains, spending time breathing in the fresh air and scent of pine, which offers a direct positive effect on reducing stress levels. (Patterson)

Which Potion Would You Drink? Your Choice Reveals What Your Soul Craves

Take a look at the potions and think about what you desire the most. This can reveal much about what your soul thirsts for.
Read more
wpDiscuz
0
0
Would love your thoughts, please comment.x
()
x
| Reply