5 Insecurities You Project Onto Your Man That Turns Him OFF 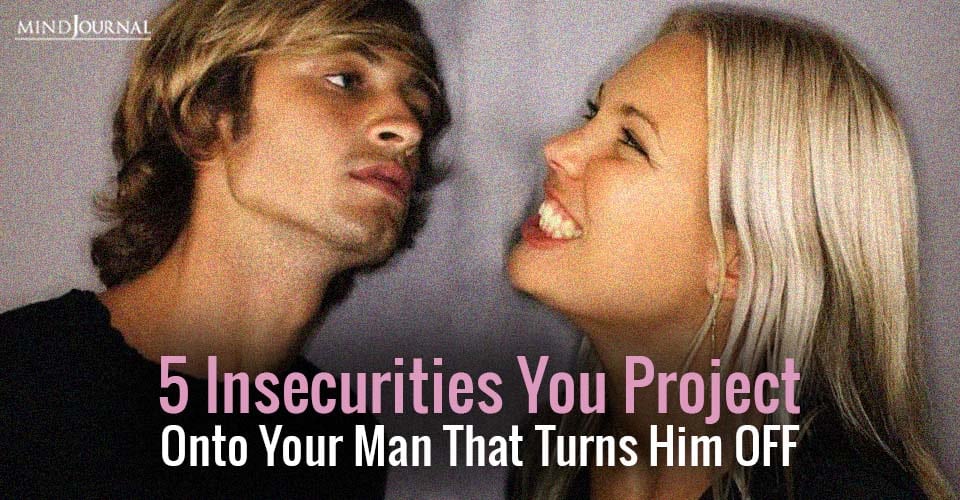 Insecurities are relationship killers. Period. All of us have insecurities. But when they start revealing themselves in twisted ways to your man, it can seriously affect that beautiful thing that you have with him. Sometimes, unknowingly, women tend to project a lot of their insecurities on their men because they have a hard time loving and accepting themselves.

He’s doesn’t need to complain about you. You’re already busy tearing yourself down.

I’m writing this with the utmost respect, but full disclosure, I’m committed to 100 percent honesty.

Yes, I know most women have a few flaws. You have a stretch mark (or two… or 10) from childbearing or weight loss/gain/loss/gain. Your hair isn’t perfect. Maybe you’ve been hurt before in a past relationship. Whatever it is, with certainty, you’ve declared that men aren’t into you because of… [insert your deepest insecurity here].

Stop projecting your “stuff” (baggage) onto your guy. It not only confuses him, it drives him crazy and drives you crazy (and not in a good way).

Here are a few of your deep fears that you project onto your man and, in doing so, are sabotaging your relationship:

1. That you’re ugly and hopelessly flawed.

A guy who is truly into you isn’t going to notice or care about minor weight fluctuations that might accompany a woman’s body chemistry, time of the month, a shift in stress habits that (may or may not) result in a little friendly food indulgence… whatever! And, when it comes to things like stretch marks, blemishes, and other superficial body imperfections — those are things you notice about you.

The right guy doesn’t care and will gloss right over them.

A man who loves you is happiest when you’re happy in your own skin. If he’s concentrating on your imperfections, he has his own insecurities to deal with, and he’s pushing his bullsh*t on you. Not only is THAT out of your control, but it has nothing to do with you. Otherwise, just because you don’t see perfection when you look in the mirror doesn’t mean your man doesn’t see perfection when he looks at you.

So stop telling him how “fat/ugly/awkward/etc.” you are. He didn’t notice until you pointed it out.

Related: 7 Ways You Ruin Your Relationship

2. That you need to argue your point (again and again).

Most of the time once an argument is over, it’s done for him. He’s not thinking about what he could have, would have, or should have said. If you’re pushing an issue and he’s already relented, you’re projecting your own need to “win” or be right. If you’ve said your peace, let him mull things over for a bit and internalize what you’ve said.

Oftentimes, in long-term relationships, you have a choice when putting issues to rest: Be right, or be happy. Happiness last longer.

3. That his compliments aren’t true.

When he says that you look beautiful, he means it. He’s telling you because he believes these words. If you pipe in and insult yourself after he just complimented you, it’s like throwing a gift back in his face. You don’t have to agree with him. Just say “thank you.”

Exes are exes for a reason… and unless the relationship has just ended — or kids/finances from a past marriage — most men aren’t thinking about their ex. (The exception: if he’s not actually finished emotionally with a past relationship, it might plague him.)

If you are insecure about his ex, talk about it, and get some clarity. If he is spending time or focusing on his ex, that’s not about you. Most often, he’s not emotionally finished with that relationship.

Expert, author, screenwriter, and co-host of FYI's Seven Year Switch. Charles J. Orlando is a relationship expert and bestselling author of The Problem with Women... is Men? book series and The Pact: Goodbye, Past. Hello, Love!, and the upcoming graphic novella Don't Date A Dick, and he serves as expert host of the hit show Seven Year Switch on FYI (currently in its second season). Referred to as "The Malcolm Gladwell of Relationships" by the media, and "Carrie Bradshaw-meets-Hitch" by his readers, Charles has built a 1,400,000+ person fan base on Facebook completely by word-of-mouth where he offers free, street-smart love advice to men and women around the world.View Author posts