How Inner Child Healing Can Help You Have Healthy Adult Relationships 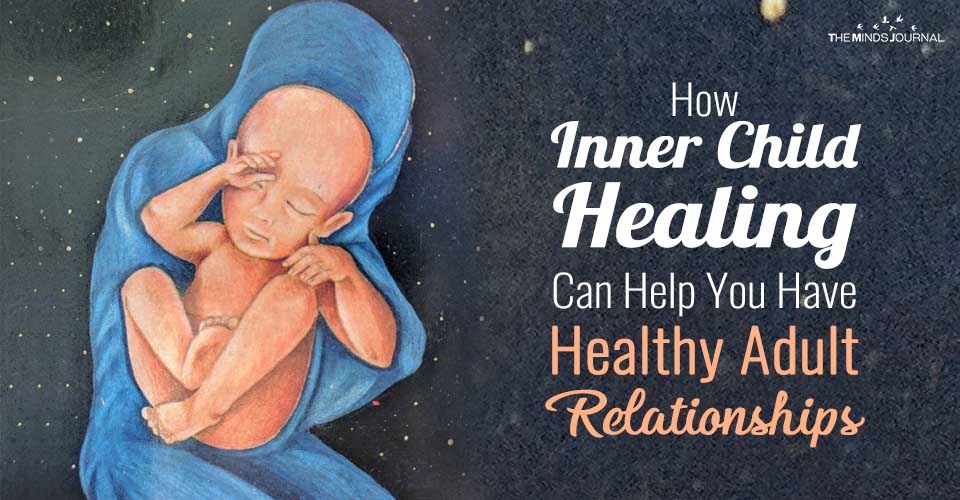 Have you ever heard of inner child healing, and how it can help you resolve issues that might crop up in your adult life?

Many, many years ago I noticed a pattern in my romantic relationships where eventually my boyfriends would leave me ‘to go home’.  One boyfriend actually moved in with me, leaving his home state and his family to do so.  But it didn’t take long for him to conform to my pattern and leave me, going home to his family.  Each relationship ended this way and it was very painful.  It just kept happening.

Later on, when I had started my ‘spiritual’ journey and inner child healing, I came across Regression Therapy and decided to give it a go with the intention of healing this relationship pattern.  I had done this one enough and now it was time to get the lesson so I could move on.

Has anything from your childhood ever affected your adult life? Read How Your Childhood Shapes Your Adult Life

In this process, I had regressed back to my birth scenario and as I witnessed this very important part of my new life, I got to see the details that I had obviously forgotten.  I saw what a hard time both my mother and I were having and got to see that we both nearly didn’t make it through.  I was born footling breach and back in those days performing a Caesarean wasn’t the medical staff’s first option.

So I struggled my way out and could feel my body being so close to giving up but there was a part of me that knew I would make it.  While this was all going on, I saw my father pacing up and down the hallway looking very nervous.  I could hear his thoughts and how anxious he was as he was being updated with the progress the birth was making.

His focus was on my mother and his fear of losing her was quite strong and I could really feel it.  Maybe it was because I am an Empath that I felt his feelings so strongly than most would.  “Oh god, just let my wife make it through please, I can’t live without her,” he thought, this was his most dominant thought.  I felt his anger towards me, ‘the baby’, blaming me for making it all so difficult.

In those days, fathers were not allowed in the birthing rooms, and because my father was having problems dealing with his strong emotions, he decided to go home to the rest of his family to await the news of the outcome.  Did you notice that? Decided ‘to go home’ …. The baby that I was then heard these thoughts and as most children do, felt responsible.

The baby me could feel his emotions even while having to work so hard just to make it.  Maybe that was why I nearly gave up so at least my mother would make it, even if I didn’t. I felt abandoned by him, he could have stayed and helped us emotionally but he wasn’t strong enough to do that. Just like the men in my relationships weren’t strong enough.

Most people wouldn’t be aware of how much their babies are in tune with what is going on around them during the birthing process. Our birth scenario is like our blueprint for the life we are about to embark on. Even down to our timing, such as someone who was premature, will always show up early. I was six weeks premature and you can always count on me to be the first to arrive.

Do you share a healthy relationship with your father? Read How an Unhealthy Father-Daughter Relationship Damages a Daughter’s Adult Relationships

Just like the action my father chose to take that day, so the men in my life were attracted to me because that was the lesson I needed to learn, one of the lessons my higher self wanted me to get this time around. When I had the chance to see this ‘act’ played out as an adult and given this knowledge allowed me to express the emotions that I couldn’t that day.  I allowed my inner child to grieve, as I sobbed with this realization because I couldn’t at the time, as I was too busy just trying to survive.

Inner child healing allows us to go back and complete the emotional processes that for some reason or another we weren’t able to at the time.  It is in these moments, due to not being able to complete the process, that we make decisions or form belief systems that do not actually serve us.

The belief that I formed at my birth was ‘Men are not there for me when I need them, they just leave and go home’.  That belief system kept playing out until I was able to go back, properly grieve, get the lesson and move on.

This simple inner child healing enabled me to change that pattern and then with the men that I had relationships with it was actually me that ended the relationship when I realized that I couldn’t see myself spending the rest of my life with them. That was until I met my husband and we have lived ‘happily ever after’.

I have experienced many forms of healing/therapy in my life and this process has been the only one where I have been able to see a change. We can do all sorts of ‘work’ on ourselves but unless we can change the belief system that was formed in childhood (usually by the time we turn seven), we can end up going around in circles just to see the pattern returning yet again.

Every child needs four experiences in their childhood to grow up to be their authentic self.  They are known as the four ‘A’s, Approval, Attention, Affection, and Affirmation. Without these four experiences, we may form unhealthy belief systems.

Without the four ‘A’s we can experience difficulties in our adult life such as anger issues, depression and anxiety, abandonment issues, co-dependency, abusive relationship patterns, Borderline personality disorder (BPD), low self-esteem, self-criticism, and self-sabotage.  We can, in the worst-case scenarios, experience trauma as a result of emotional, physical and sexual abuse.

It does take courage to have a good look at what experiences we’ve had and how it formed our belief systems and what a wonderful experience that can be.  To uncover why events in our lives don’t turn out the way we want them to and to learn what we need to do to turn that around is very powerful. Getting to know who we really are without those distorted views.

Taking the journey to discover who we once were, our authentic selves, before the learned behavior from our caretakers, as children along with false beliefs formed, we can peel back the untruths that have buried that empowered little being.

If you want to know more about inner child healing, then you might find this video interesting:

Robyn Iacuone is a Certified Life Coach, Shadow Work Practitioner, Inner Child Therapist, Past Life Therapist and Rebirther with over 25 years of experience in the field of personal development. Robyn works in an intuitive and accepting way with a strong ability to read between the lines and guide her clients down the right path. Robyn specializes in working with Empaths and Highly Sensitive People and teaches her clients the tools to reach their goals effectively and efficiently.View Author posts