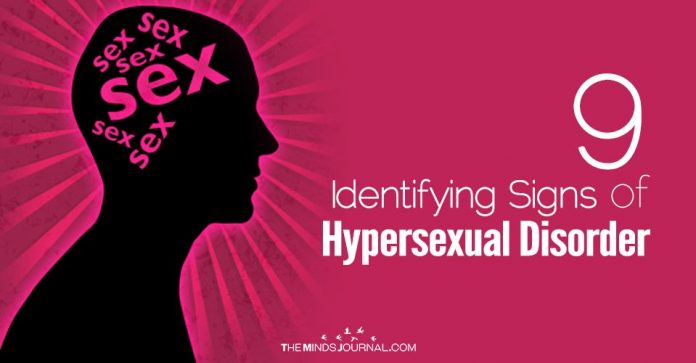 Hypersexual disorder is much more than high sex drive.

It’s an addiction just like any other drug addiction where the victim has no control over their desires. Even though the victim knows it’s not good for their well-being as well as those of others around them, they are instigated to do it because of this disorder.

Like an alcoholic who can never stop drinking, a sex addict or a person with hypersexual disorder can’t have enough of sex. For a sex addict, the act of sex gives them a temporary escapade from the reality and when it’s over, they succumb to loneliness, stress and anxiety. They don’t feel any form of connection with their partner.

As responsible social beings, we need to understand the symptoms of hypersexual disorder so that if we find them in someone we know, we can get them to see a therapist before things get worse.

(2) Their life is revolved around sex:

Whatever they are doing or saying are related to sex. They get depressed if they don’t have a satisfying sex or a sex at all. They have fights with their significant others on the issue. sex addicts tend to think about how and when they are going to have their next sex. They think about sex so much that it has become their life. If such problems crop up, then the person is surely turning out to be a sex addict.

(3) Frequent use of online and phone sex services and watches pornography:

If the person frequently uses sex services online or over phone, or frequently watches pornography and contents explicitly related to sex,  then it means they need sex to breathe which is a warning sign that it’s not a necessity but rather a disorder.

If the person is frequently having extramarital affairs or more than one sex partners or having sex with someone who is not their better-half, then that’s a sign of hypersexual disorder. When this type of behaviour grows, the person is more likely to hire prostitutes to have their regular dosage of sex.

(5) They remain emotionally detached from their sexual partners:

They don’t care about their sexual partner’s emotional needs. All they want from them is sex. Once it’s done, they are over with it. They don’t bother about that anymore.

(6) They frequently indulge in paraphilias:

Frequent indulgence in unusual sexual activities, paraphilias is an inkling that the person might be a sex addict. It’s not a good sign if the person is into paedophilia or voyeurism or masochism or activities like that.

(7) They are obsessed about sexual partner they can never have sex with:

We all know about unrequited love. But this form of unrequited sex is not so beautiful. If a person is always obsessing about having sex with a partner they can never get, then it’s not something normal. This obsession instigates the person to stalk their partner, spy on them and even sexually assault them which is extremely dangerous for both the parties.

(8) They engage in sexual behaviour which is against their moral values:

If a person who is extremely committed to religion or abides by strong family values engages in abnormal sexual activities like paraphilias or  have extra marital affairs or indulge in sex with strangers, then it’s a warning sign that they are becoming sex addicts.

(9) They can’t stop no matter how much they want to:

If someone can’t stop indulging in frequent and unusual sexual activities, then it’s a red alert that they need help.

If you find one or more of these signs in someone you know, then you should call a therapist. Hypersexual disorder can be treated and the person can get back to the flow of life pretty soon.

Are you a perfectionist and extremely effective? Do you micromanage everything? Then you just might be a control freak.
Read more
wpDiscuz
0
0
Would love your thoughts, please comment.x
()
x
| Reply