How Your Spiritual Energy Is Affected By One-Night Stands 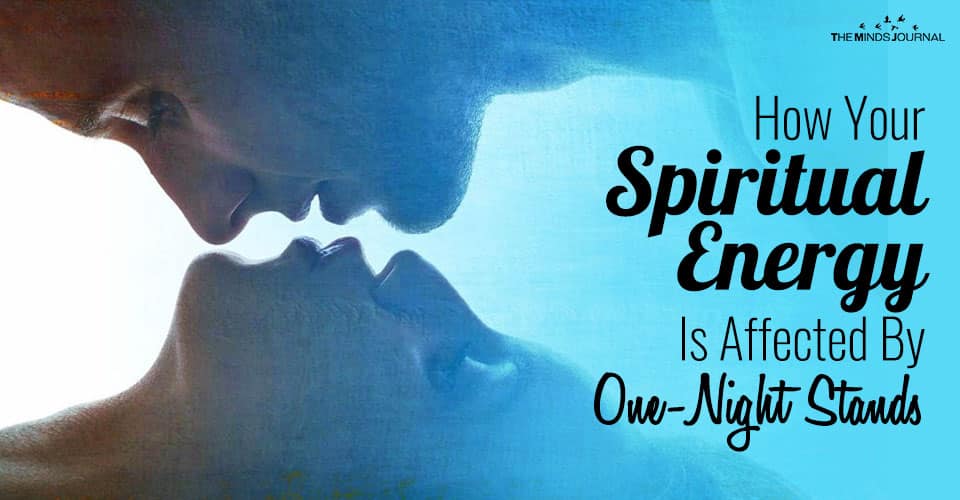 We, humans, consist of energy. Do you know that your spiritual energy is getting affected by One-Night Stands?

It is the movement between the negative and positive poles that creates electricity. It is the attraction between the male and the female that creates new life. The dynamics of the universe are dialectical, apparently in a conflict, but occurring within a larger context of unity and wholeness. This is the understanding of the Tantra vision.”  ~Margot Anand

As science has quite define-ably explained- the union of the masculine and feminine reproductive units is what gives rise to a separate entity. While these opposites are conflicting, jarring, and mostly at loggerheads with their opponent, they also coalesce to achieve a distinct harmony. Male and female spirits complement and complete each other. The Chinese Yin and Yang theory is the testament to the need of the “other” to complete the jigsaw puzzle we call ‘life’.

It is important to find and establish meaningful relationships- ones that actively cater to your healthy worldview. This laboring after harmony and the perfect seamless cooperation of the co-existing forces is what the Tantric philosophy encompasses.

In the 21st century, our lifestyle is more unstable than ever before. Having shunned slower mediums of relaxation, or healthy activities, we are being propelled light years ahead into a depressive state of being. The divorce rates are higher than ever before- primarily because more human beings are beginning to grasp the concept of incompatibility, but also because our ability to adjust and maintain emotional balance has taken a toss. We are constantly hunting for something bigger, something better, something brand new. Infidelity is one of the biggest concerns of our time.

It is a true conjecture that being spiritually enlightened causes a lot of pain in the physical domain of love. But what most people do not understand is, it also initiates a valuable process of healing.

When one is first introduced to a high bolt of energy, their mind and body lack the safety valve to control and adjust its impact. Consequently, when one is first pushed into the bright, blazing sphere of enlightenment, they often lose sight of their principles.

As a raw form of energetic wave plunders the heart, and the mind, the impulse for intercourse is severely heightened. To find a release for this energetic overload, people often seek innumerable partners to draw to their beds.

The consequences become insignificant in the light of new-found peace, and happiness. The ‘brain chakra’ being suddenly exposed to a new direction, loses control and is sucked into the flow of white energy. Emotions are sidetracked, and one is given to impulse. These participants believe that sleeping with multiple partners would give them a greater worldview than the restrictive nature of a monogamous relationship can ever have to offer.

Your senses are severely heightened during the process of intercourse. A duct in the brain, that widens and shuts, keeping a dial on the conscious responses, is restricted to remaining wide open. Its movement has been compromised.

This causes an immense incoming of spiritual energy into our bodies. When this duct is allowed to close, as is normal for the neural unit, it is responsible for orgasmic responses, under usual circumstances. If this said energy climbs its way upwards through the center or the channel in at the crux, then it has the ability to block orgasmic responses.

In theory, this should sound scary. It is right to believe that it would potentially upset and quite destroy bonding. However, if this procedure is initiated and accepted mutually, then the effects are quite significantly comforting. It raises the relationship to a much higher level of spiritual awakening, which only the two of you have access to. The partners are no longer restricted to pleasure on the physical plane, but their bodies and minds can unite in a lucrative spiritual carnival.

The mysteries of the Universe are held in your embrace, and you have mutually unlocked the door to a vast expanse of knowledge. It becomes a symbiotic relationship, a peaceful coexistence, a habitation on a higher stratum that is accessible to the general populace. This coalescing of beings erases the threat or the need for infidelity. Not only do you gain in the relationship, but you also obliterate the possible threats to long-term well-being.

If one is to be perfectly honest, there is no law of Nature that can bind you to be loyal. There is no reward, no impulse or law that makes one truly wish to be faithful. The power or impulse of sexual energy outweighs the stronghold of principles or age-old ‘to-do’s. In a state of frenzy, our primal self-abandons the societally acceptable façade and acts according to the brute that he is.

Yes, your partner could be absolutely gorgeous. Yes, your husband could be a great athlete, or father, or lover. But so are a million other people. Our genius is not restricted to us. Our talents and manners find replications in thousands of people all across the globe. There is truly nobody who does not have a better version of themselves in another person. It is an endless loop. It is foolish and naïve to say that somebody’s personality can influence their partner to be loyal to them in a relationship.