How To Stand Up for Yourself Without Rocking The Boat 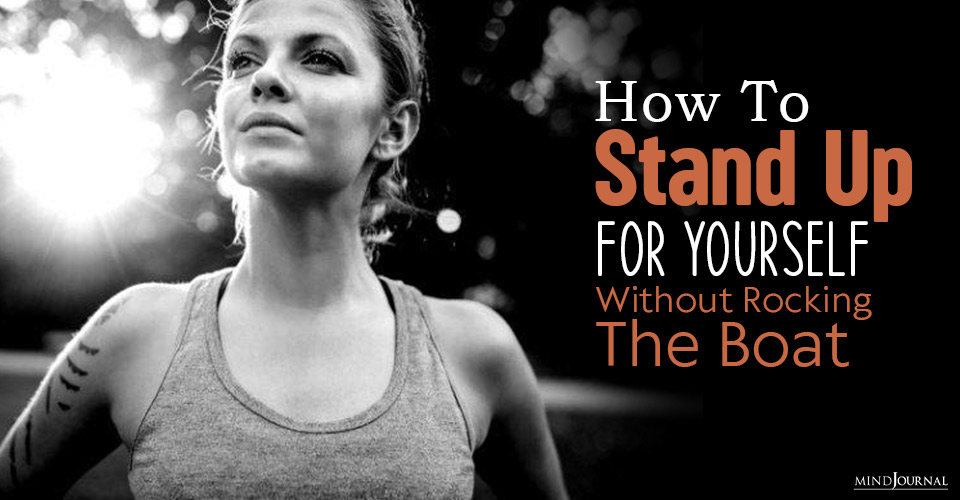 Many people strive for harmony in relationships. Setting aside personal feelings to avoid discord may be a habit. Yet, withholding emotions for an extended period of time takes a toll. At some point, it is necessary to voice discontent. Doing so in a way that sparks a fruitful exchange helps.

Unfortunately, it is sometimes easier to swallow personal feelings than confront a person who is robustly defensive and extremely reactionary. Yet, it is necessary. A person may repress and suppress their own needs, feelings, and perspectives, but eventually, an implosion feels inevitable.

Despite different approaches to confrontation, there are some personality types who may not receive it constructively. Yet, the individuals who have a more malleable defensive structure, a structure that allows them to be self-aware and self-reflective, may respond to a confrontation in a manner that allows both parties to grow in both personal awareness and conscientiousness.

The theory behind the approach is simple. Disarm the other person’s defense mechanisms by launching the confrontation with a positive sentiment. Next, state how you feel. Then, talk about the issue. For example, “Jane, I really like working with you. You make my day fun. I was surprised and hurt when you presented my idea for the project without me.”

As opposed to, “Jane, you take advantage of me. You only care about yourself.”

The first example is respectful and conveys a desire to preserve the relationship and resolve the conflict without drama. Jane has an opportunity to explain or own her behavior, make things right, and salvage the friendship.

The second confrontation is abrasive and seems like an attempt to label Jane as a bad person and call off the friendship. Jane is more likely to be hurt, defensive, and attack back without reflecting on her own behavior.

Related: Resolving Conflicts: The ABCs of Escalating Conflict and 7 Tips To Prevent Them

Additional examples of this approach include:

The person who is confronted has an opportunity to explain his or her perspective, clarify a miscommunication, or own a misstep. Initially, it is common for an individual to be defensive, but the ability to calm down and authentically take responsibility for themself, convey a sincere understanding of how he or she impacted another, and attempt to repair the situation may be a solid sign of emotional intelligence.

Alternatively, if the person is extremely defensive, they may attempt to deflect accountability, distort the facts, and project blame onto the person who is confronting them. In this case, it may be helpful to refrain from adding fuel to the fire by engaging in a battle of differing realities. Finding a way to politely end the exchange may be necessary. “This discussion doesn’t seem productive. Let’s table it for another day.”

Unfortunately, this personality type may be unable to manage a confrontation. They may appear shocked, enraged, and unconsciously distort the data in order to point the finger back at the other person. Confronting this type of person seems to start an endless drama with no productive resolution.

Hold on to the individuals who can honor another person’s feelings, demonstrate accountability, and attempt to repair wrongdoing. It is tough for a person to hear that they did something to hurt a loved one. However, it is a critical moment in a relationship and maybe a litmus test of a person’s emotional health.

In addition, a person who can own their mistakes in a relationship is often easy to spend time with. Minor ruptures are easily repaired and both people move forward with a greater understanding of each other. Closeness, trust, and respect are maintained.

A person may be conflict-avoidant because of past experiences with an individual who wasn’t secure enough to handle confrontation productively. The nightmarish fights which followed a minor and diplomatic confrontation or question may have been painful and dramatic.

It is also probable that a person may have been raised by a parent who had trouble with confrontation, accountability, and self-awareness. Thus, during childhood, the person learned to stifle feelings and discontent within the parent-child relationship because verbalizing feelings that differed from the parent made life worse for the child.

Related: The 3 Roles We Play During a Conflict & Ways To Escape The Drama Triangle

Often the attachment relationship with a parent dictates how safe the person feels disclosing discontent in a current relationship. This may be an important aspect of the person’s working model of attachment. An awareness of the tendency to suppress feelings in order to preserve a relationship may eventually help a person find his or her voice.

Feeling safe enough to identify a negative feeling state in a relationship is important. Having a partner or friend who is secure enough to honor the feeling and own their part in the conflict makes this possible. Insight into how a parent dealt with a person’s different feelings within the parent-child dyad is critical information that may inform a person about his or her avoidance of conflict.

Finally, an awareness that some people may not handle the confrontation productively often leads to insight about that person’s emotional intelligence, and thus the need to resurrect a healthy boundary.

When you are trying to stand up for yourself, keep in mind that you are not doing anything wrong; you are simply taking back your power and letting the other person know that what they are doing is not right. The need to stand up for yourself is equally important as the other person’s need to express their opinions. If they are right, it’s okay, but if they are not, it’s better to call them out on it.

If you want to know more about how you can stand up for yourself, then check this video out below: