How Each Myers-Briggs® Type Reacts to Stress (and How to Help!) 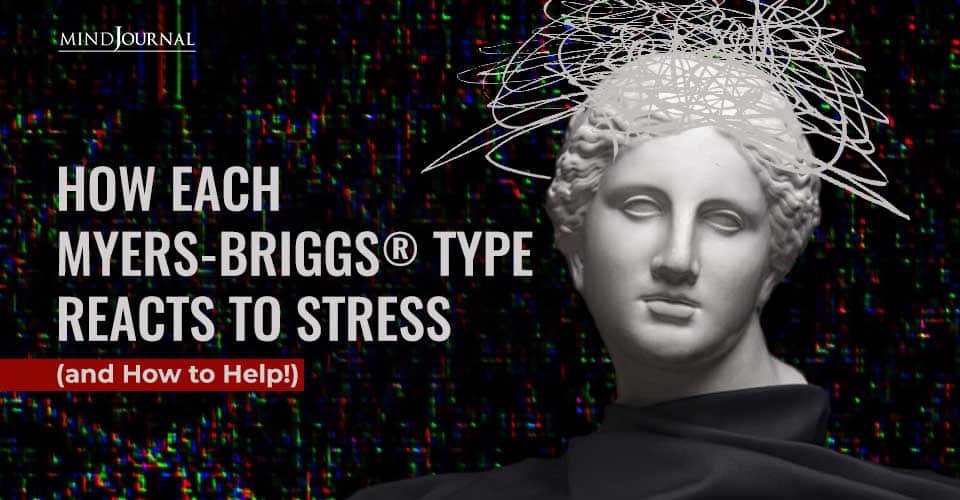 What stresses out an ENFP:

– Environments where rules are rigidly enforced
– Focusing on repetitive, detailed tasks
– Having to focus too much on sensory details
– Having to focus too much on the past or present
– Not being able to use their intuition
– Constraints on brainstorming or envisioning
– A lack of outside stimulation
– Being micromanaged
– Having creativity stifled
– Having to complete projects before they’re ready
– Criticism
– Lack of appreciation
– Having their values violated
– Overextending themselves for others

ENFPs tend to overextend themselves and procrastinate, which is often a source of stress as it complicates their lives. When they become stressed, their naturally charming natures become more irritable and over-sensitive. When stressed, ENFPs feel alienated and engage in deceptions to obscure what is occurring within themselves. They will feel that they are losing control over their own independent identities and feel conflicted by intruding circumstances. During continued stress, they may fall into the grip of their inferior function, introverted sensing. When this happens, they become obsessive and depressed. They will become hyper-aware of minor bodily sensations or abnormalities and interpret them as a sign of a serious illness. They may have a hard time communicating clearly and feel numb and frozen inside. Their thinking may become cloudy and convoluted. They will feel that there are no possibilities or ways out. They may feel overwhelmed, out of control, unable to sort out priorities, and thus become inflexible. Some become obsessive about record-keeping, cleaning, or other household tasks.

How to help an ENFP with stress:

– Give them space and time alone to sort out their feelings.
– Remind them that they are able and competent.
– Give them permission to “escape”
– Don’t give them advice. It won’t help right now.
– Don’t ask for details.
– Don’t try to “fix” the problem.
– Meditation often helps ENFPs
– Listen to them.
– Encourage them to exercise
– Encourage them to get enough sleep
– Encourage them to get a massage
– Be warm and kind in the way you speak to them
– After they’ve calmed down a little, ask them if they want help evaluating the situation.

What stresses out an INFJ:

– Having to focus too much on sensory/concrete details
– An overload of sensory stimulation or noise
– Interruptions
– Distress within a close relationship
– Having their values violated
– Not enough alone time. Too much extraverting.
– Working with closed-minded people
– Lack of appreciation or understanding
– Unfamiliar environments with overwhelming amounts of details
– Having plans disrupted
– Not having a clear direction
– Lack of harmony
– Criticism and conflict
– Not being able to use their intuition or envision the future
– Having to focus too much on the present

When under stress, the INFJ feels fragmented or lost. They feel like they can’t be themselves, and feel an urge to act a part to “survive” or fit in. This disassociation can cause physical symptoms for the INFJ, like headaches, IBS, or nausea. The repressed feelings they’re holding onto can cause them to become immobilized. If they are under chronic extreme stress, they may fall into the grip of their inferior function, extraverted sensing. When this happens, they may engage in indulgent, self-destructive habits like binge-eating, cutting, over-exercising, alcoholism, or excessive pornography use. This often feels like an out-of-body experience to them. What they do provides no pleasure, but feels somewhat robotic and out of control. After this occurs, they dwell in self-hatred, falling even more into guilt over what they’ve done. They may become uncharacteristically angry and quick-tempered, unreasonable, and irrational. They may become obsessed with details in their outer world; obsessively cleaning or doing housework. They stumble over their words, and their intense feelings eventually lead them to a state of complete exhaustion.

How to help an INFJ experiencing stress:

– Give them space.
– Reduce sensory stimulation; music, interruptions, TV, etc,..
– Let them express their thoughts and feelings.
– Understand that they may be irrational. Don’t judge them.
– Don’t give advice. This will only stress them out further.
– Let them take a break from some of their responsibilities
– Encourage them to spend some time in nature, walking or reading a book.
– Take a walk with them if they want company.
– Encourage their less serious side, and let them relieve emotional tension by letting them cry through a sappy movie or novel of some sort.
– Be forgiving if they’ve been overly harsh or critical while under stress. Chances are, they will feel very guilty about it.

What stresses out an ENFJ:

– Being in critical or confrontational environments
– Lack of appreciation or affirmation
– Lack of harmony
– Unexpected change
– Inadequate time to complete work to their standards
– Tense relationships or environments
– Having to do mundane, repetitive tasks
– Having to conform with something that goes against their values
– Over-empathizing with others to the point of losing track of their own needs
– Being misunderstood or not trusted
– People not living up to their idealized expectations

When an ENFJ experiences stress, they often disassociate themselves from the situation in an effort to protect their sense of well-being and togetherness. They may repress the unpleasant side of life for so long, that it gradually intensifies until the ENFJ explodes with emotion and/or charged anger. Often the ENFJ’s body will reflect pent-up stress by manifesting various physical symptoms, like headaches, shoulder tension or an upset stomach. In the case of chronic stress, the ENFJ may fall into the grip of their inferior function, introverted thinking. When this happens, the ENFJ may uncharacteristically lash out at others, obsess over their mistakes, lack of competence and flaws. Eventually, these criticisms will turn inward and the ENFJ will withdraw from others to self-criticize. He or she may become obsessive about analyzing irrelevant data to find some ultimate truth or reason for their stress.

How to help an ENFJ experiencing stress:

– Acknowledge how they feel.
– Let them talk it out.
– Remind them of their strengths and contributions.
– Don’t use logic to talk them out of their stress.
– Don’t ignore them, even if they seem irrational.
– Give them a change of scenery to get away from the situation.
– Go outdoors. Do some type of exercise with them.
– Watch a lighthearted movie or comedy with them.
– Do not patronize or dismiss their concerns.

Susan Storm is an MBTI, Certified Practitioner, freelance writer, and psychology enthusiast. She has been avidly studying psychology for over ten years and loves to engage with a variety of people and personalities to understand them better. Her major areas of interest are personality psychology, child psychology, and developmental psychology.View Author posts