How To Build Your Belief In Yourself 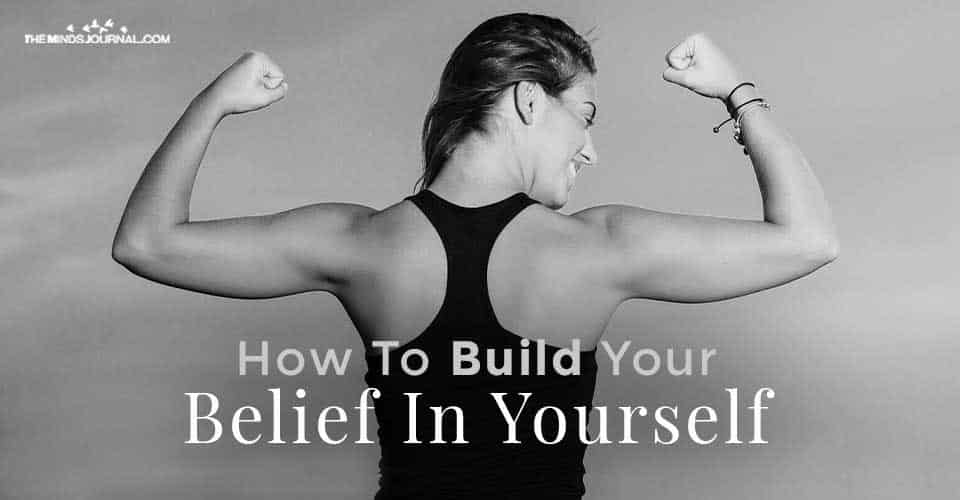 Do you believe in yourself, and have ample confidence about who you are? If not, then it is vital that you build your belief in yourself to be truly happy.

How To Build Your Belief In Yourself… and leap the biggest hurdle between the life you have and the life you want.

“Andy” entered my office seeking help for his depression. But after a few therapy sessions, the root of his problems became clear: He had a deep-rooted belief that he wasn’t good enough.

He’d started believing he was inadequate during childhood, and he held onto this belief throughout his life. His assumption that he would never amount to anything led him to be an underachiever. Because he concluded he wasn’t smart enough, talented enough, or motivated enough to do much of anything, he’d created a lifestyle that reinforced those beliefs.

He had worked an entry-level job for years. He didn’t bother to manage his money well because he assumed he’d always live paycheck to paycheck and be deeply in debt. He rarely took the initiative to meet new people. And he never established new goals for himself. His depression was simply a side effect of the lifestyle he’d created.

Much like Andy, many people create lifestyles that reinforce their self-limiting beliefs. But, quite often, those beliefs are inaccurate and unproductive, and they cause people to live a life far beneath their potential.

How You Develop Negative Core Beliefs About Yourself

You develop many of your beliefs about yourself during childhood. Perhaps you grew up always feeling like an outsider. Or maybe you had a parent who was verbally abusive. Those types of experiences could lead you to believe you’re a loser or a failure.

Those types of conclusions will cause you to subconsciously seek evidence that supports your beliefs. Every time you fail a test or get rejected by someone, your negative beliefs will get reinforced.

Whenever you discover evidence to the contrary—like you ace a test or land a promotion—you chalk it up to external factors, like luck. You ignore your accomplishments and magnify your mistakes. That’s just how your brain works when you so wholeheartedly believe something.

Because you believe those things about yourself, however, you won’t recognize that you’re doing this. Instead, you just think your failures and problems serve as more proof that you’re not good enough.

Want to know more about how you can inculcate positive belief in yourself? Read 5 Ways You Can Practice Self-Compassion And Be Kind To Yourself

Your Beliefs Turn Into Self-Fulfilling Prophecies

Just because you believe something about yourself doesn’t make it true. But there’s a good chance that you’ll make it come true in a subconscious manner. What you believe influences the way you interpret events, how you feel, and how you behave. And much of the time, those beliefs turn into self-fulfilling prophecies.

If you believe you can’t handle stress, you’ll be less likely to step outside your comfort zone. Then, because you never practice doing anything scary, you’ll struggle to handle discomfort when it arises.

The list of examples could go on and on.

How to Give Up Self-Limiting Beliefs

If you’ve spent 30 years believing you’re a loser, then simply telling yourself, “I’m a winner,” isn’t likely to be helpful. You can’t unlearn deep-rooted core beliefs that easily. Instead, you have to challenge your beliefs by testing them to see if they’re really true.

Conduct a behavioral experiment by challenging your beliefs. If you believe you’re too socially awkward to make friends, ask yourself, “What would I be doing if I were socially savvy?”

Then, use a skill called “acting as if.”‘ Behave as if you are a socially savvy person. That doesn’t mean you need to be a phony; instead, behave in a way that brings out another side of your personality.

If you believe socially graceful people start conversations with others, try doing that yourself. Set a goal for yourself when you’re at a social event; for example, introduce yourself to five people. Rather than sit in the corner worrying that you look awkward, branch out and strike up conversations. You might find that behaving in a more outgoing manner leads to more social success.

In addition, look for evidence that runs contrary to your self-limiting beliefs. Write down the reasons your belief might not be true. Look for exceptions to the rule and take notes. Simply raising your awareness of the fact that there are times when you are more capable than you give yourself credit for can help chip away at the belief that you’ve held so strongly.

Want to know more about how you can believe in yourself more? Read 60+ Carl Jung Quotes On Finding Yourself

Your mind can be your best asset or your biggest enemy. If you’ve drawn inaccurate conclusions about yourself, your self-limiting beliefs could prevent you from reaching your greatest potential.

Everyone has a few self-limiting beliefs. To discover yours, spend some time thinking about your potential and assessing the assumptions you make about yourself that keep you from living your dreams.

Your beliefs, rather than your lack of ability, could be the biggest hurdle standing between the life you’re living and the life you want to live. But the good news is that with a little time and extra effort, you can develop the mental strength needed to overcome the self-limiting beliefs that prevent you from reaching your greatest potential.

It is not always easy or possible to be optimistic and confident all the time. But, neither is being self-deprecating. If you constantly feel that you are not good enough, then you need to stop and look deeper, and give yourself that love and compassion, that you probably give others. In order to be truly happy, you need to love yourself first.

If you want to know more about believing in yourself, then check this video out below:

I'm a psychotherapist Since 2002, I've been working as a psychotherapist helping people address issues ranging from depression and anxiety to parenting problems and stress management. I've worked in community mental health centers, schools, and doctor's offices. Over the years, I noticed that some people were more resilient than others and I began to study what makes people mentally strong. In 2013, at one of the lowest points in my life. I wrote a letter to myself called 13 Things Mentally Strong People Don't Do. I published it online in hopes it might help someone else. My letter went viral and was read by over 50 million people across the globe. Soon after, I wrote a book, also called 13 Things Mentally Strong People Don't Do. It became an international bestseller and has been translated into more than 25 languages. My latest book, 13 Things Mentally Strong People Don't Do, teaches parents how to raise mentally strong kids.View Author posts

2 thoughts on “How To Build Your Belief In Yourself”