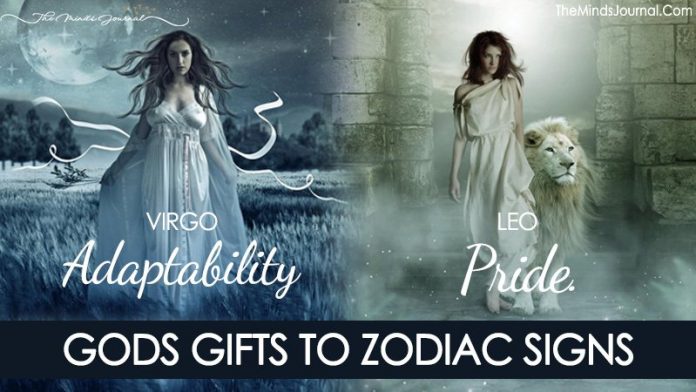 Zeus, the King of all Gods and Goddesses was believed to bless each human with a gift, one special power which could help them in their lives. Thus, the king of Olympus blessed Zodiac Signs – every single one of them – with one particular gift. A Gift that defines one from another. Zeus was believed (and still is) to love human kind so much that he always finds ways to help them in their ways.

There is a Legend that builds the story of all Zodiac Signs. A fascinating myth (?) which was either made up or assigned to each Zodiac part in order to represent the real qualities that enrich the ones born under it. In this way, the ancient Greeks narrated how the Gods and Goddesses gave each human a Divine Gift to help them in this life.

In a way, this is a blessing and a curse. One has to embrace the Gift but also learn how to evolve with it. A gift may also be a trap. A valuable lesson to teach us that we should always try to learn more and live with dignity and respect for others. So let’s begin with each sign…

Aries is associated with the Legend of the Golden Ram’s fleece, a story older than time. According to the ancient historians, Jason and the Argonauts traveled a long journey, facing a thousand difficulties in order to retrieve the Fleece of a Golden Ram which was hidden and kept in a mysterious land far away. Jason never loses faith and he keeps finding a way to succeed with teamwork as he “sacrifices” himself for the greater good. Zeus honors Jason by turning the Golden Fleece into a bright constellation as a reminder of his faith.

The Gift of Gods to Aries is an honor. Aries is guided by the enthusiasm and sometimes “blind” faith. A voice keeps telling them that everything is going to be ok. It’s not optimism. It’s faith. This is the ultimate trust to the Gods and this is why they are honored by them. They may not see the fruits of what they’ve planted but their creative nature will not stop turning soil into a green odorous garden.

The second of Zodiac signs, Taurus, is inspired by the Legend of the hero Theseus. He actually volunteered to be the one who will be sacrificed to gods. Every year, one young person from this city was chosen to be eaten by a horrible monster, named Minotaur. The young boy or girl (imagine a teenager) was dragged into the Labyrinth, where the beast dwelled. In this dark maze, the boy/girl was always lost and Minotaur will feast on his/her young flesh. Theseus manages to kill the beast and also finds a way out of this maze.

The Gift of Gods to Taurus is power! No matter what are the situations or who are the opponents, if they truly want something, they will find a way to achieve it. Their power comes from within, from their hearts and this is something they have to embrace. Love conquers all and their hearts thirst for Love. They are blessed by the Gods with unimaginable strength.

The third of Zodiac signs, Gemini, is inspired by the Legend of Dioscuri, the two twin brothers who voluntarily joined Jason and the Argonauts in order to track down the Golden Fleece. They loved each other very much and together they made a great team. However, Castor was killed and Pollux was heartbroken. Zeus, who admired the love of these brothers, invited the living twin (Pollux) to live with him and the other Gods on Olympus. Pollux respectfully denied and then Zeus found a way to live together forever making them 2 bright stars.