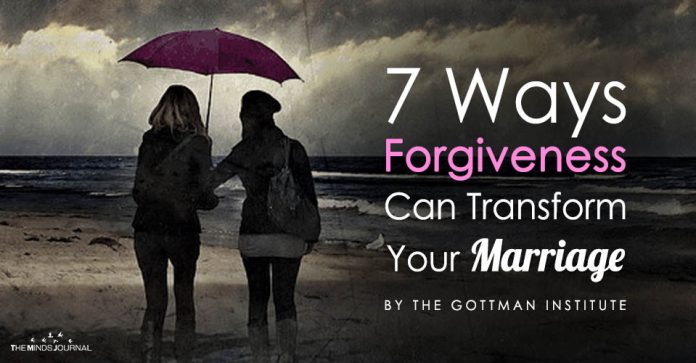 7 Ways Forgiveness Can Transform Your Marriage

Recent studies have shown that forgiveness is an essential component of successful romantic relationships. In fact, the capacity to seek and grant forgiveness is one of the most significant factors contributing to marital satisfaction and a lifetime of love.

Forgiving yourself and others is about being willing to acknowledge that you are capable of being wounded. It also means that you are willing to step out from the role of victim and take charge of your life.

Couples who practice forgiveness can rid themselves of the toxic hurt and shame that holds them back from feeling connected to each other.

In The Science of Trust, Dr. John Gottman explains that emotional attunement is a skill that allows couples to fully process and move on from negative emotional events, and ultimately create a stronger bond.

Abby has felt resentment and anger towards her husband Rob ever since she found out he has been communicating with his ex-girlfriend Samantha through text messages and emails. Rob has apologized and accepted responsibility for his actions, but Abby is unwilling to forgive him.

Over the last two months, Abby has shut down sexually and emotionally. She’s been giving Rob the silent treatment and has told him repeatedly that she’s unsure about his commitment to their marriage.

Abby puts it like this: “Rob says they’re just friends but I don’t buy it. I just can’t seem to get over my feelings of resentment toward him. During our marriage, we’ve gotten over many hurdles, including adjusting to crazy work schedules and trouble with in-laws. But this issue is too big.”

The problem with holding on to resentment toward your partner is that it often leads to withdrawal and a lack of vulnerability. Over time, this can erode trust. In Abby’s case, she has been bottling up feelings of anger and resentment for some time and she’s lost trust in Rob’s intentions.

In an effort to protect herself, Abby is unwilling to engage in what Dr. John Gottman refers to as repair attempts with Rob. This couple is stuck in a negative pattern of interaction and Abby is not acting with goodwill toward Rob – an essential element of a successful marriage.

Abby continues: “I can’t get over the fact that Rob has been communicating with Stephanie behind my back. It’s such a betrayal. I found out about it by reading a text message and recognized her name immediately. Even though I knew they were still friends, it hurts that he was hiding being in touch since she moved back home.”

Is it possible for Abby to rebuild trust in Rob after feeling betrayed? Gradually, Rob must be willing to put his relationship with Abby first and demonstrate trustworthiness through his words and actions. Abby would be wise to extend trust to Rob and not automatically assume the worst. In time, she may rebuild trust by taking responsibility for her own reactions and changing her mistrustful mindset.

For instance, if Abby is thinking like a forgiving person, she might adopt a perspective that assumes it’s possible that Rob simply made an error in judgment by not telling her about his contact with his ex. Or, it’s possible he believed he couldn’t be completely open and honest with Abby because she expressed jealousy in the past (about his ex) and he feared losing her.

Truth be told, many mistakes are not intentional, so it’s best not to make them into something they’re not. Listen to your partner’s side of the story, and avoid blaming or criticizing them when you confront them with your concerns.

If their negative pattern doesn’t change, Abby and Rob might begin to feel critical and contemptuous of each other – two of the major warning signs that their marriage is doomed to fail, according to Dr. Gottman.

Why is Forgiveness Important?

Often people equate forgiveness with weakness, and it is widely believed that if you forgive someone, you’re condoning or excusing their behavior. However, in marriage, forgiveness is a strength because it shows you are capable of goodwill toward your partner. Studies indicate that forgiving someone is one way of letting go so that you can heal and move on with your life.

There are some couples out there whose relationship doesn’t have any romance in it at all or the romance has decayed over time. Are you one of them?
Read more
Marriage

If all you do is shift your thinking to “How can I make my beloved happy today?” you will change the course of your marriage.
Read more
Marriage

7 Gifts That A Long And Healthy Marriage Gives You

Like everyone else, do you also look forward to having a healthy and long marriage with your spouse, but sometimes things feel...boring?
Read more
wpDiscuz
0
0
Would love your thoughts, please comment.x
()
x
| Reply