3 False Ideas About Dreams And How to Respond 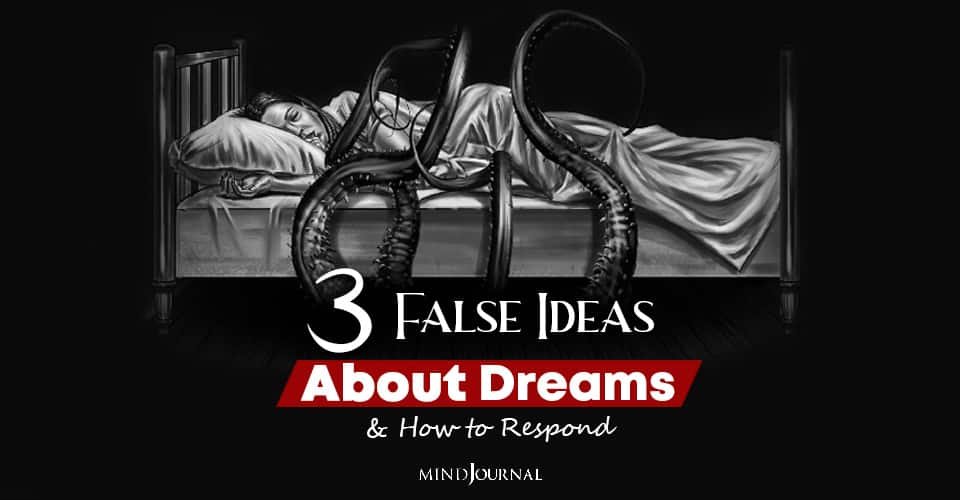 Dreams are a source of eternal amazement and profound insight in human life. It’s a natural impulse to want to tell other people about your dreams, especially those that feel unusually powerful and dramatic.

People in contemporary America, however, rarely share their dreams with anyone else. Our society provides few acceptable places for discussing dreams—a therapist’s office, a sleep laboratory, a weird TV show. Outside of those spaces, dreams are generally treated as irrelevant for daily life. Most teachers, religious leaders, and even mental health professionals have no training in dream interpretation, which adds to the sense that dreams are insignificant, and anyone who talks about them is just wasting time.

If other people want to ignore their dreams, fine, that’s their business. But if you want to explore the creative depths of your own unconscious psyche, go ahead! Don’t let their misguided skepticism get in your way. If someone challenges you with one of the following three mistaken claims about dreams, you will now know how to respond, with empirical evidence about the actual nature and functions of dreaming.

1. Your dream is boring, no one wants to listen to other people talk about their dreams.

This claim is about a quarter right, meaning it’s three-quarters wrong. In an online survey, I recently did with a group of more than 5,000 American adults (I’m currently analyzing the data in collaboration with Michael Schredl), 24% of the participants said they strongly or somewhat agreed with the statement “I get bored listening to other people talk about their dreams.”

Meanwhile, 40% said they strongly or somewhat disagreed with that statement, and the remaining 36% said they neither agreed nor disagreed. The truth, then, is that while a minority of the population thinks dreams are boring, a significantly larger number of people do not think they are boring.

Also read Dreaming in Adolescence and Young Adulthood: The Meaningful Continuities Between Waking and Dreaming

2. Your dream means nothing, it’s just random nonsense from the brain.

This claim isn’t even a quarter right. In fact, it’s a rationalist prejudice that ignores the actual scientific data on the topic. Going back to the 1950’s, researchers in the content analysis tradition of Calvin Hall, Robert Van de Castle, and G. William Domhoff have done numerous studies showing that recurrent patterns in dreams are meaningfully and predictably related to personal concerns in daily life. Anyone who thinks dreams are entirely random has probably not done any actual research on the subject.

If they did, they would quickly discover there is far too much structure and consistency in dream content over time to justify the idea that dreams are pure nonsense.

3. It’s obvious what your dream means, it’s plain, simple, and transparent, right there on the surface.

Beware of this claim especially, because whatever follows is going to express the other person’s unreflective projections, which may or may not have any relevance to your dream. Not only is this claim rude, but it’s also myopic. Dreams always have multiple meanings. This is one of the central findings of the long and rich history of Western dream psychology, from Freud and Jung onwards.

Dreams have many, many different dimensions of meaning, and what we find depends in large part on where we start and what we’re looking for. Rushing to a single, reductive interpretation is a common reaction to the alarming polyvalence of dreams; it’s an easy way of banishing complexity and controlling what the dream is allowed to say.

Also, read Why Do You Keep Dreaming About Your Ex?