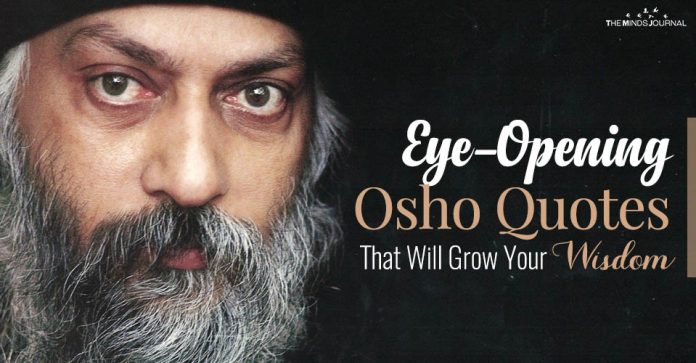 Eye-Opening Insightful Osho Quotes That Will Grow Your Wisdom

Born as Chandra Mohan Jain, Osho took birth in Raisen (a district in Madhya Pradesh) on December 11th, 1931. He was a great visionary and a religious movement leader who was praised and followed by many. His followers used to call him Bhagwan Shree Rajneesh and later, Osho. He didn’t only have followers in India, but also in many other countries such as the USA, UK, Canada, and many more. It was like people were attracted by his words and he gave them an eye-opening experience.

Along with being a religious leader and a mystic, he was also a best-selling author and published many books such as Tarot Zen, The Book Of The Secrets, Gita Darshan, and many more.

His books, words, and morals affected many people and gained him a lot of followers. He was so popular that Netflix even made a docuseries on him by the name of ‘Wild Wild Country’ consisting of only 6 episodes. He was really a quotable man as he taught people a lot about love and spirituality through his sayings and books.

Rajneesh Osho inspired a lot of people to follow the path of spirituality with his words. I will be sharing some of those words in this article and they are either the ones he has said or written in his books. Either way, the goal is to grow our wisdom with the words of a man who influenced a lot of people.

So, here are some insightful Osho quotes that will grow your wisdom:

What Osho says here is gospel and is really the true definition of love. Love is a big misconception nowadays and we really need to understand its true meaning. If you see a flower and find it beautiful, you’ll most probably pluck it to keep it with you. Well, that’s human nature, however, if you do pluck it, it will not be able to complete its necessities for survival and will eventually die.

As a result, it won’t be appealing to your eyes anymore. So, you’ll lose the reason you loved it for in the first place. A better thing to do would be taking care of that flower without plucking it. This way, it will always be the flower you fell in love with. It should work the same way with the people you love. For love is about appreciation, not possession.

The meaning of this quote is very simple and quite understandable. Be the way you are. Just learn to love yourself and don’t try to become someone or something that you are not. God gave us all different personalities, different goals, and different lives. You only have one life and you are here to be who you are, to play your part. Don’t waste your one precious life to change the way you are from the inside.

3. “Friendship is the purest love. It is the highest form of Love where nothing is asked for, no condition, where one simply enjoys giving.”

I’ve never heard anyone giving such a pure and perfect definition of friendship, other than Osho, of course. He says that the purest form of love is ‘friendship’ as you don’t keep any unreal expectations from your friends and you love them unconditionally. And that is exactly what love should be, caring for someone unconditionally. Rather than expecting that someone will do something for you or be a certain way with you, learn to appreciate them for what they are, just like you do with your friends.

These Ted Talks are sure to ignite their passion and move them to think differently. All the videos are inspiring, engaging, and motivating.
Read more
Coronavirus

8 Iconic Figures Who Made History While In Quarantine

Do you know that some of the iconic figures in history did their best work that changed mankind and the world for the better while being in quarantine?
Read more
Inspiration and Motivation

Intentionally conquering your responsibilities with confidence may seem difficult, but these 5 lessons that I learned from almost drowning can help anyone achieve success in business & life:
Read more
wpDiscuz
0
0
Would love your thoughts, please comment.x
()
x
| Reply