Are You A True Empath Or Just Sensitive? Take This Quiz To Find Out 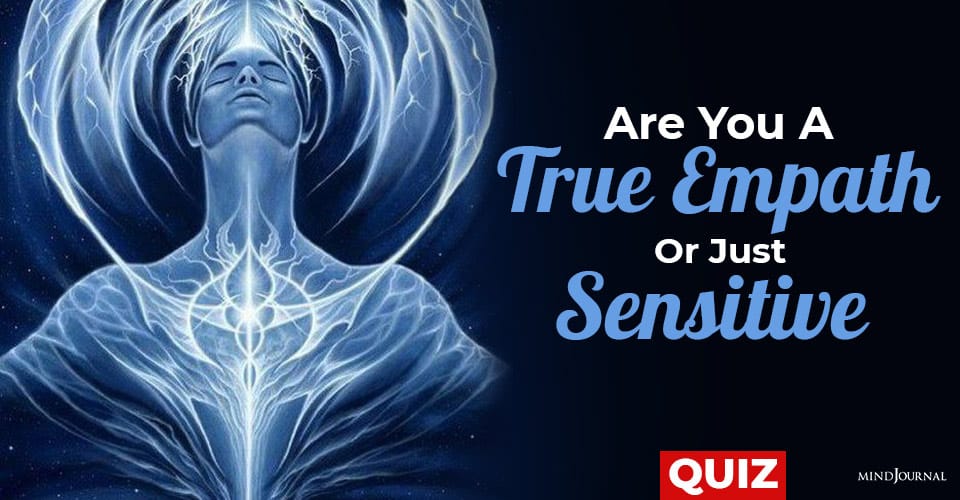 Are you an empath? Or are you just a highly sensitive person (HSP)? It’s often easy to get confused between being an empath or HSP. This sensitive person/empath test can help you find out if you are just sensitive or a true empath.

Have others ever told you that you are a bit too sensitive? Do you often feel overwhelmed by loud noises and crowds? Do you think you can feel the pain of others? Then there’s a good chance that you may be an empath or at least an HSP.

By understanding your gifts and your true nature as an empath or HSP, you will be better able to regulate and use your energy and help yourself and others live a better life.

A Highly Sensitive Person (HSP) usually refers to individuals who are sensitive to the people and environments around them due to certain genetic characteristics. According to clinical psychologist and author Elaine N. Aron, PhD. “A Highly Sensitive Person (HSP) has a sensitive nervous system, is aware of subtleties in his/her surroundings, and is more easily overwhelmed when in a highly stimulating environment.”

HSPs have high sensory awareness and are usually deeply attuned with their surroundings. It is estimated that around 20% of the population of HSPs. Elaine adds “HSPs tend to fill that advisor role.

Also read: The 8 Types of HSP: What Type Of A Highly Sensitive Person Are You?

Empaths are people who have high levels of empathy and can feel the physical symptoms or complex emotions of other individuals, even though they might not be experiencing a similar situation.

Psychiatrist and author Judith Orloff, M.D. explains “An empath is someone who doesn’t have the same filters that others have so they tend to feel everything. Empaths are emotional sponges who tend to take on the stress (and positivity) of the world.”

Empaths can pick up on the energy of others and “can sense subtle energy, which is called shakti or prana in Eastern healing traditions, and actually absorb it from other people and different environments into our own bodies,” adds Judith.

She further says, “In empaths, the brain’s mirror neuron system – a specialized group of cells that are responsible for compassion- is thought to be hyperactive. As a result, empaths can absorb other people’s energies.”

So are HSPs and empaths the same? Well, not really. With around 2-3 percent of the population being empaths, it is crucial that you understand whether you are an empath or HSP.

Also read: 8 Unexpected Benefits Of Being An Empath

Although empaths share a lot of similarities with HSPs and a lot of HSPs tend to be empaths, there are subtle differences between the two characteristic traits.

Being highly sensitive means that you have heightened sensory awareness while being an empath is almost similar to having clairsentient abilities.

Psychiatrist Judith Orloff, M.D. explains that “empaths take the experience of the highly sensitive person much further: We can sense subtle energy (called Shakti or Prana in Eastern traditions) and actually absorb it from other people and different environments into our own bodies.

So what are you? Are you an empath? Or are you an HSP? If you want to find out about your true inner nature, then simply take this interesting quiz below with honesty and an open mind.

Also read: Are you an HSP? 10 Ways To Know If You Are Highly Sensitive

Take the Empath or Sensitive Quiz

Developed by experts, this fun little quiz is designed to help you realize whether you are an empath or HSP. Simply answer a few questions about yourself and we will provide you the most accurate results.

1 thought on “Are You A True Empath Or Just Sensitive? Take This Quiz To Find Out”